Some words are easier than others to coin.  Obamagasm came naturally.  It “evolved” out of the unnatural forced agenda that the liberal media is sexually molesting the citizens with.

To this day, the average reader can conjure up the name of not one single Republican interested in running for President.  This phenomenon is what the liberal media calls “a job well done”, and then it’s off to the cafeteria for Hot Pockets.  It’s similar to the branding, as the liberal media has done, of new Liberal Party Frenchman Stephane Dion as “the Green Guru”, or like “Stephen Harper is scary”, or “the Conservatives have a hidden agenda”. 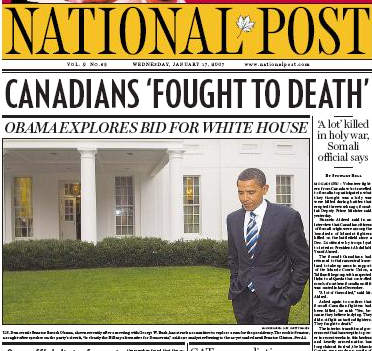 Personally, if I were a newspaper editor interested in informing readers rather than pushing an agenda, I would have found a picture of him with other rookie politicians who are likewise barely out of their school gym shorts and still learning the ropes.

You’d think that was enough, already, with the over-the-top coverage of a non-Canadian event.  No no.  Over on page A-2, which is normally reserved for important news, virtually the entire page is devoted to more of the liberal media Obamagasm.