I had a really fun time watching the spin-fest on the state-owned CBC’s “Politics” show on Friday.  Not just because it’s advertised by its host Don Newman, nationally, on our dime, as the place where “the spin stops here” even while they continue to place banners below their stories reading “NAFTAGATE” all this week, and therefore the spin actually starts there more than stops there;  but because National Post columnist and perpetual guest politics expert Don Martin did what all liberals accuse conservatives—particularly bloggers like me—of doing, ostensibly to mock their Great Obama.  He caused some confusion over Obama and middle-east terrorists.  No, he didn’t do the unthinkable, which is to utter Obama’s middle name, which is Hussein.  That is, as we’ve been instructed, unthinkably abhorrent!

Of course the esteemed columnist Don Martin—one of Canada pre-eminent columnists—made his error because he was quite clearly just clumsy and let the words just slip out accidentally, which is OK in this one case.  Like all opposition members of Parliament and the entire Canadian mainstream media, he’s enormously and dutifully “aghast” only when Prime Minister Harper’s aids slip up and say things they shouldn’t have, on the basis that they could embarrass, say, The Great Obama.

But let’s review how it becomes a laugh riot when this top opinionator in Canada calls Barrack Obama Osama bin Laden.  Twice.  Where “the spin stops here”.  On Canada’s state-owned, state-run media.

Here is the exact moment after saying Osama bin Laden, instead of Barack Obama, in which he indicated the hilarity over the fact that he’d done almost the exact same thing the night before in some other interview.  Ha ha, oh by golly, ha ha ha. 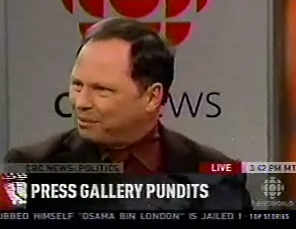 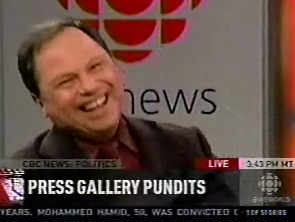 Here he is moments after saying Osama instead of Obama for the second time in the same show.  He’s mimicking the idea of shooting himself in the head over the gaffe.  (With a registered firearm no doubt!). Oh my goodness—like theirs, my sides, they ache with all the funny.  Oh dear.  Good times. 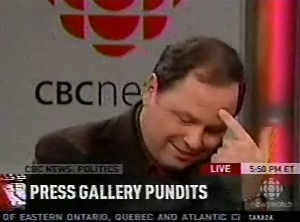 At least Obama won’t be insulted or hate Canada or anything.  And it won’t hurt his chances in Pennsylvania.  And it sure as Hell ain’t “meddling” or harming Barack Hussein Obama or causing any confusion in the minds of anybody.

Hey who should get fired?  Who should apologize?  Nobody?  Well that’s good because nobody did, and I can assure you, nobody will.  It should just be accepted as a riotous laugh. It’s the liberals’ mainstream media!  It’s all just a joke.  Literally.

Oh and once again here’s the ad that repeatedly runs nationally in newspapers in which Canadians are informed that the “the spins stops here”—at the CBC Don Newman “Politics” show.