Expert hates the term “NAFTAGATE”… “but I’ll use it anyway!” CBC host: “That’s what it’s called!”

I thought this was odd:  On Friday, on the state-owned, state-run CBC “Politics” show, where in case you didn’t know, “the spin stops here”, the fair and balanced politics experts were discussing that alleged leak of (hopefully!) Harper-harming Obama talking points in which their Great Obama was exposed as an allegedly double-talking no-good politician who is prepared to dupe voters into voting for him.  (Don’t worry, the main thing is that “leak”!)

Panel expert and National Post columnist Don Martin [host of Power Play on CTV News Channel] explained in discussing the issue that regarding ”…that whole NAFTAGATE thing…”, he “hates that’s term, but I’ll use it anyway”.

Wow!  What mysterious power has got such a grip on the poor man’s brain that he must use the term even though he “hates” it?

Here he is in the moment when he resolved that he’s going to go ahead and use that term “NAFTAGATE” that he so “hates”.  I find it odd that some mysterious force is causing him to use a term that he “hates”.  Especially in a state-owned zone where “the spin stops”. 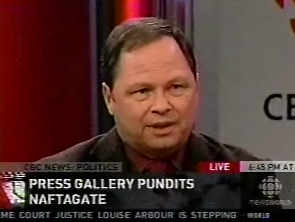 After Don Martin’s comments, the state media Politics host, Don Newman [now retired], declared this:  ”…On ‘NAFTAGATE’, with all due respect to you, sir, that’s what it is being called!…” [laughing heartily].  He said that in that place where “the spin stops here”, which is odd, donchathink?

Here he is declaring that that’s what it is being called.  By some magical force.

Here’s Mr. Martin and panel as they are being informed that “NAFTAGATE” is “what it is being called” in the “spin stops here” zone.  Apparently, they are forced, by some ghostly, unseen spiritual being from some other dimension—perhaps Liberal Party HQ!  (Just kidding!)— to call it that—and thus, “that’s what it is being called!” [laughing heartily]..

It’s a laugh riot.  They all laugh over that non-spin moment… 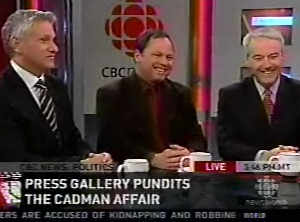 And by way of reminder, here’s the newspaper ad that repeatedly runs in newspapers all across Canada, on our dime: 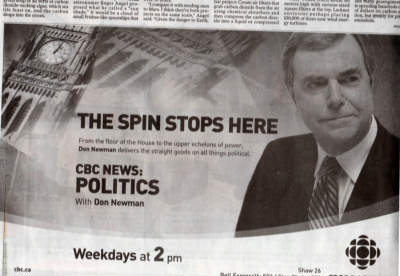 Update:
What NAFTA-gate probe found [Nothing]