MUST SEE VIDEO: Rex Murphy on ClimateGate … with bonus MUST SEE REACTION from CBC news anchor!

Well now the “climate science” has really hit the fan.  Rex Murphy, who went “rogue” way before Sarah Palin did (alas he’s no Sarah Palin —just compare the head shots), and who’s famously employed by both the far-left state-owned and socialism-reliant CBC, and its kissing cousins over at the liberal’s very own Globe and Mail division, and who’s more famously known for actually being sensible so often, on so many issues, despite it all —let loose on the ClimateGate story yesterday.  Remarkably, he did this on none other than Canada’s alarmism-central for the “man-made global warming” religion, the CBC.  And as if to add insult to injury, he did it on their premier (though a loser in the ratings) nightly newscast, The National, starring Jack Layton  the Video Professor  Peter Mansbridge, or whoever.

Because the state-owned CBC’s lawyers have previously threatened to sue me to what amounts to Kingdom Come — or for many times what I’m worth — complete with boring, CBC-style, legal papers which read like the script to a David Suzuki “science” special, delivered by state courier directly to my home, and instructing me within all the legalese in no uncertain terms am I to ever expose them in my critiques ever again post videos of CBC garbage (well, they didn’t actually call it “garbage”, per se —that’s my word), I can’t post the actual Murphy video, just a link to the YouTube version of it.

But in the video, what struck me as much as the fact that they actually let Rex Murphy get away with all his talk about the hitherto all-but-covered-up-by-the-CBC ClimateGate talk, is the hilarious and very revealing reaction to it from head news anchor Peter Jack Layton Video Professor Mansbridge, after Murphy was done and he tossed it back to the Mansbridge or whoever he is.  I just had to screen-capture the smirk-a-palooza for you—it was priceless. 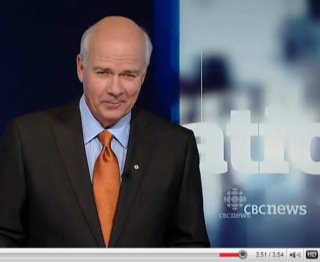 What’s he saying to you with that mini festival of smirks?  “Oh that Rex Murphy —what a misguided fool, eh?”  Or was it “Geez I guess Rex musta got a big cheque from ‘big oil’, eh?!”  Or how about “Holy smokes he had such a nice pension plan before going and doing that!”  Or possibly, “Racist!”

Hat tip to Jay S. for the heads up.

Yet again the Thursday network evening newscasts on NBC, ABC, and CBS failed to cover the ClimateGate scandal. However, ABC World News did manage to devote a two minute story to the release of singer Susan Boyle’s first album.  …

MEANWHILE…
Sign a petition which Brain B sent me yesterday, as forwarded to him by the good Friends of Science web site, at which Canadian climatologist and “man-made global warming” realist Dr. Timothy Ball acts as an adviser.  They say it “asks Stephen Harper to establish a Royal Commission to determine the cause and extent of global warming.  Such a commission is very consistent with our mission to bring transparency to issues related to climate change.”

Who’s afraid of actual science?  Not us.