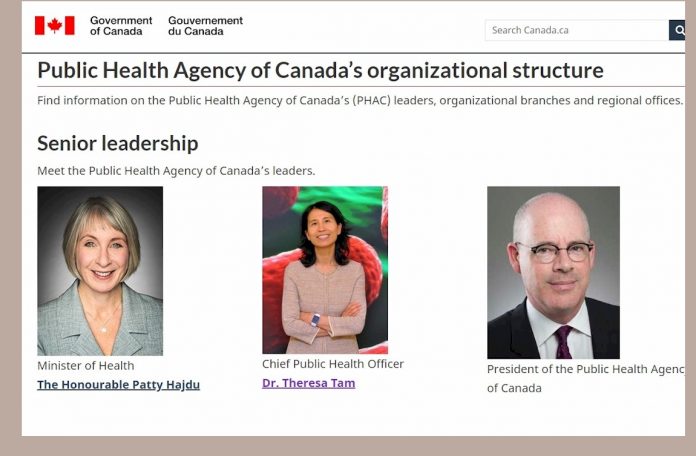 This story is intriguing mostly by virtue of its exposure of the nation’s burgeoning bureaucratic state (burgeoning not just in size, but in its power and control) — or what some would credibly refer to as the Canadian “deep state.” Also, China. Wuhan, China. And global diseases. And possibly, spies.

And not that this has anything to do with Bill C-10, but hey Guilbeault, you want more forced “Canadian content” (like they do in China with Chinese content by pure coincidence!)? Here’s a political spy thriller that’s right on point. It also involves science, which you all keep saying you like “to follow!” Maybe a producer (besides the state-owned CBC because, ridiculous) could pick this up and run with it (without Canadian Heritage Department funds, presumably, but also the producers would probably have to do without China’s financial aid and or any play in China’s state-owned movie theaters).

This particular politburo, the National Health Agency of Canada (NHAC — the “HAC” part is merely another fun coincidence) has been made famous by the Wuhan Virus (which some people call “COVID-19” for some weird reason, possibly nefarious). This agency is best known for its leadership, including the worse than useless Liberal TV star Patty Hajdu, who is Minister of Health for some weird reason, and the inimitable TV star Dr. Theresa Tam, who serves as Chief Public Health Officer. Its President (yup, there’s one of those, too) is Iain Stewart, appointed just last September after the previous president quit for some weird reason right in the middle of a pandemic. They also have an Eric Morrissette, who is cast as chief of media relations, in case that helps you understand the size, the breadth, the scope —the depth of the state, as it were. A cast of thousands.

Reporter Robert Fife (it’s always Robert Fife) from the Liberals’ Globe and Mail division uncovered the story today (this is what is known in political hack circles and in the movies as “awkward” for them and their entire liberal media messaging cohort), and is, as I said intriguing. It seems the NHAC division is refusing to deliver unredacted documents to, well, us, the people (as represented by our MPs), for whom they work, and to whom they ultimately report —and to whom they are obliged to answer on account of the fact that we’re not communists and we’re not run by a tyrannical dictatorship led by Health Ministry Commissars (or in Soviet-speak, the Russian “комиссáр.”) Or so we are to believe.

MPs (particularly Conservative MPs) want documents because CSIS, Canada’s secret spy agency, advised the NHAC to strip those two Chinese “scientists” of their Winnipeg virus lab’s security credentials for some weird reason in 2019, and then they and an unknown number of their very own Chinese “students” who were also working in that lab for some weird reason, were escorted out of the lab.

(I assume they are all Chinese because the state-owned CBC in a headline referred to them as “Chinese researchers“. Then again, upon my review of CBC articles about this, I find the CBC first called them “Chinese researchers,” then in their next article they sort of flipped the coin and referred to them as “Canadian scientists,” then, finally in February, they called then merely “Scientists.” All by the same reporter. They are either clueless, beholden to the “woke” set and afraid to be called “racists” if they acknowledge they are Chinese, or they are simply gaslighting us with BS. What we do know is that they came from China, as did their students.)

And the RCMP are also investigating the circumstances around the January 2021 firing of those same two NHAC “scientists,” a roll which I put in quotes because I, and maybe some CSIS members, RCMP members, and MPs too, question if that was actually their and their students’ real role, rather than something a lot more nefarious, like spying for China, as if I had to tell you. And shipping viruses to Wuhan, China (which they actually, seriously did!), specifically to the now infamous Wuhan Institute of Virology for that lab’s own “study” purposes, back in 2019 — before the Wuhan Virus was released into Canada and other places. But the NHAC president (no, not the media guy who is paid to do nothing, apparently) says that virus shipment has nuttin’ to do with nuttin’. Or as they say it in China, “Zhè yǔ rènhé shìqíng dōu méiyǒu guānxì” or “這與任何事情都沒有關係.”

Amir Attaran, a law professor and epidemiologist at the University of Ottawa, said in June of last year,

“We have a researcher who was removed by the RCMP from the highest security laboratory that Canada has for reasons that government is unwilling to disclose. The intelligence remains secret. But what we know is that before she was removed, she sent one of the deadliest viruses on Earth, and multiple varieties of it to maximize the genetic diversity and maximize what experimenters in China could do with it, to a laboratory in China that does dangerous gain of function experiments. And that has links to the Chinese military.”

Yeah sure, you can go ahead and re-read all that if you’re having trouble believing this kind of shit actually goes down in Canada. Here’s part of the G&M report today:

…In January of this year, Xiangguo Qiu, who headed the Vaccine Development and Antiviral Therapies Section, and her biologist husband, Keding Cheng, were fired from their positions with the National Microbiology Laboratory (NML) in Winnipeg.

The couple and an unknown number of Dr. Qiu’s students had their security access revoked in July, 2019, and were escorted from the Winnipeg lab, a Level 4 facility equipped to handle some of the world’s deadliest diseases. Four months earlier, the Winnipeg lab had shipped Ebola and Henipah viruses to the Wuhan facility, part of what the Public Health Agency of Canada (PHAC) later described as an effort by this country to “foster global collaboration.”

A federal source – with direct knowledge of the case – said the Canadian Security Intelligence Service began raising alarms after it grew concerned about the nature of information that was being passed to the Wuhan lab. The source said CSIS was focused on the people that Dr. Qiu was talking to in China and intellectual property that may have been given to Chinese authorities. …

But this conclusion to the G&M’s reporting also really caught my eye and would add some extra punch to the movie version, or maybe a sequel! It seems to indicate an impending explosion over this within the ranks of the Liberal Party and its multiple, beloved, bureaucratic behemoths, with some finger-pointing, finger wagging, possibly misplaced advice, denials, or assumption of any sort of responsibility! What an unusual plot twist!

…Robert Oliphant, the parliamentary secretary to the Minister of Foreign Affairs, took pains to distance the dispute from the continuing COVID-19 pandemic.

“This has nothing to do with coronavirus,” Mr. Oliphant told the committee [House of Commons special committee on Canada-China Relations].

He also cautioned the Public Health Agency to review the legal advice it is getting.

“I think you need a second opinion. I think the Justice Department is not giving you the best advice,” he said.

So to recap, the Minister of Foreign Affairs division of the massive government is advising that the Public Health Agency division is not getting good legal advise from the Justice Department division, which all stems from an investigation by the CSIS spy division, and is being investigated by the RCMP division; concerning taxpayer-funded information about possible breaches of national security protocols, in a taxpayer-funded lab by two taxpayer-funded “scientists” who engaged in state-funded research, possibly leading to outcomes with enormous national security implications, maybe even global ramifications, and the agency’s refusal to share any of that information with the lowly people of the country who own all of this, even through their taxpayer-funded representatives, in secret. The only winner here seems to be Communist China. Weird.

Maybe Justin Trudeau is right: maybe China does have a better system of government worthy of his great “admiration” of “their basic dictatorship.” (Luckily the role of Trudeau could be played by Trudeau, given his acting experience.)

Previous article
“I still can’t believe I’m typing that phrase”
Next article
This website and its founder stand for Israel and its people, against Islamic Jihad and Hamas terrorists