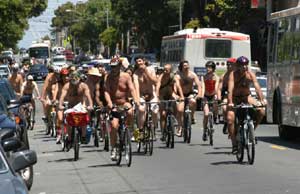 “It’s a protest against oil dependency and car culture and the overuse of cars for unnecessary reasons. There is too much pollution, it stinks in London, and we use too much fossil fuel. I think people should be a lot more comfortable with their bodies. There is nothing wrong with the naked body.”

Yup.  That’s what they said.  mmmm, as they rode through London buck naked.

Reminding us all once again to take a pocket-sized bottle of Purell with us to the bike rental shop. Or to just take an entirely new bike seat.

A group of naked cyclists took part in a bike ride to protest against oil dependency and to “celebrate the human body.”

Crowds gathered as about 100 people set off from Hyde Park corner, London, in the World Naked Bike Ride past some of the capital’s most famous landmarks.

Most of them stripped fully naked for the 10km (6.2 miles) cycle past Piccadilly Circus, Big Ben, Covent Garden, Oxford Street and the United States Embassy.

Some bikes were decked out with banners reading ‘Oil is not a bare necessity but a crude obsession’ and ‘Support the trade justice movement’.

Others have slogans painted on their backs and some were on roller-skates.

And this bit of good news:

The capital is one of 54 cities joining in the worldwide naked protest which is now in its second year.

Oh yay.  Maybe they can combine it with the various “Gay Pride Parades” and really explain a thing or two to our children.

UPDATE:  I did some fact-checking and found that darn the luck, in Canada the big naked bike riding is set for today, and here I am all set to waste my time working in the garden with my clothed wife.

Here’s the link in case you’re a depraved moonbat.

An ad at the U.K. naked bike/protest web site has this ad for the Work Less Party.

Apparently they’re preaching to the converted.

Alarm clocks kill dreams, huh?  I did not know that.