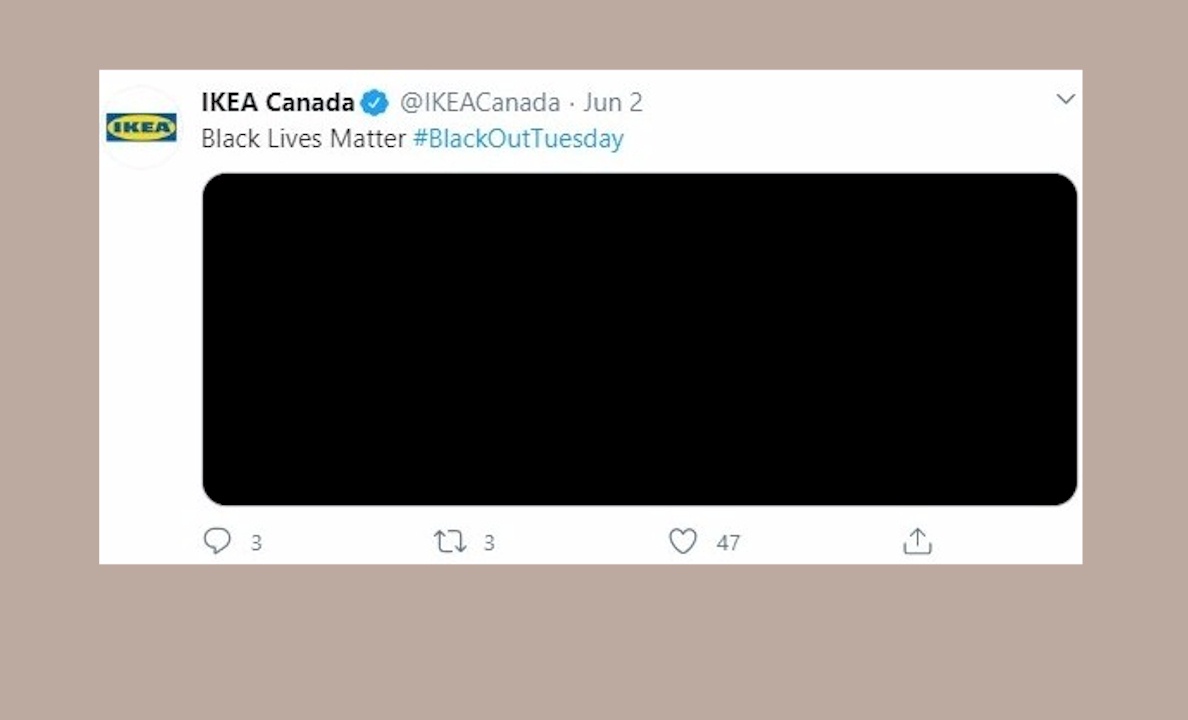 We built our kitchen with cabinets we bought at Home Depot, about 25 years ago. They still look OK, but our kitchen really needs an update. So off we go —online this time instead of using our car— looking for cabinets.

IKEA offers an online kitchen planner, which you log onto to configure every detail of your purchase. It’s not the greatest app, it’s slow, it’s clunky, but it does the job. Along the way, you can see your various changes, with measurements, 3-D renderings, exactly what parts you have to order, and of course the final price. Ours came in at nearly $13,000.

When you’re really, really, finally done, done — which for us took months of work and careful consideration and reconsideration, trying to fit the various IKEA sizes into various spots, realigning and reconfiguring over and over — you can stop looking at it on the screen, and print out (or save to PDF) a complete list with measurements and graphics, then sit down at your couch or at your kitchen table and look it all over. Then finally order it.

There was a little problem at this last point. Not at the price — that, we accepted. No it was that the technology broke down when we tried to print it or even save it to a PDF file. It simply wouldn’t do it. We tried for days, and finally asked for help via the only way IKEA offers you (aside from phoning, which, given the usual time-frame of an hour or more on hold, is a hilarious notion for me because I have things to do): it’s one of those online chat apps. So I engaged the chat app, since I had no other viable option, and was put on chat hold for nearly an hour anyway.

The chat gal tried her hardest on her end to get our plans to print out, but it wouldn’t work for her either. I kept thinking it was pretty amazing that out of their millions of customers, I was the first one to bring this obvious and really important days-old technical problem to the attention of the vast IKEA corporate world.

Anyway she couldn’t fix it, nice as she was in our chat.

That was Sunday, and it was, as I said, after days of it not working. So on Monday I thought for sure it would be fixed, since, as far as I know, Monday is a work day for I.T. people the world over and especially in Sweden, where, notably, they didn’t really shut down for the China Virus at all. And by now, I know they have been advised of the glitch. But no, still broken.

I wasn’t going to go onto the chat again, since apparently that’s a waste of my time. I thought that maybe they had a Twitter presence, as many companies do, and maybe they kept their customers up-to-date on glitches and engage with customers that way (even if only because they are forced to by the public shaming that often ensues if companies ignore issues brought up so publicly). Sure enough, there’s @IKEACanada.

I started scrolling down and I soon saw that no, they don’t use this as a customer service platform, merely as a marketing thing or public messaging/advertising medium. And I saw this series of tweets after all the now-ubiquitous corporate-lefty, trend-chasing and social justice warrior-like “We support LGBTQ” and “We support Pride,” (etc) tweets: 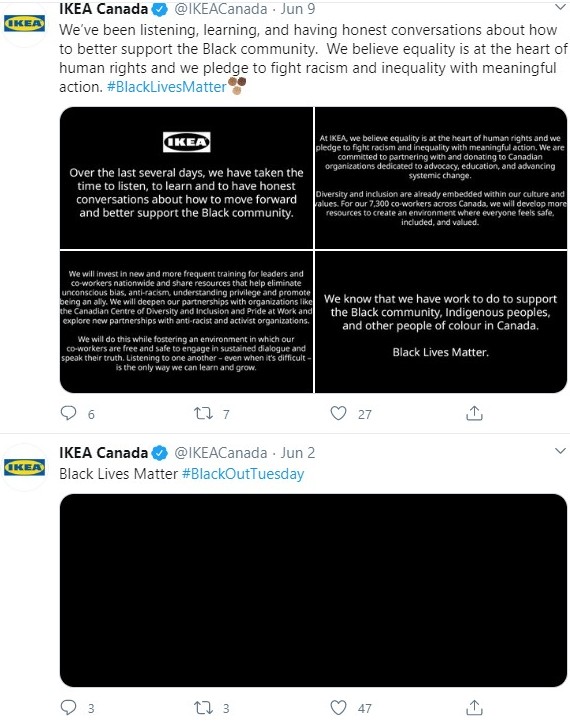 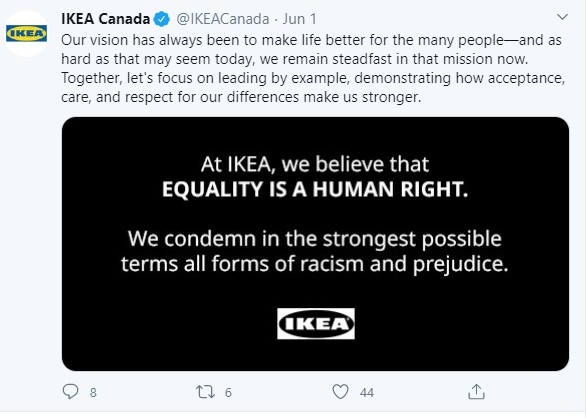 Nothing about the technical glitch though. They can’t fix their website so I can procure $13,000 worth of their product at a time of global economic collapse, but they’re all over this “Black Lives Matter” issue, and voicing their willingness to invest untold amounts of money in “activist organizations” — presumably like the violent, rioting, Marxist-inspired, anti-family, anti-capitalist, fascist, and some would argue anti-white racist, Black Lives Matter mob of thugs that they typed out in capital letters and used in hashtags.

I wondered if I could get back on that chat app and discuss social issues and racism and my white privilege with with one of the IKEA social justice experts. (Don’t worry, I chose not to.)

I immediately lost interest in redoing our kitchen with what now seemed like a radical, Marxist-supporting company. I sent the Twitter links to my wife, and she agreed.

We continue to look around at alternatives, despite all the work we’d put into the IKEA planner, and we will land on something eventually. But we will not likely be supporting IKEA’s left-wing outreach program and messaging, and we will not give them our money so they can donate any part of it to support “activist organizations” like the Black Lives Matter Marxists.

What we need — from IKEA and everyone else with a pulpit — is leadership in heeling and unity and bringing calm in this country during a pandemic which, with the able help of idiots in government, has all but ruined our economies and countless lives and livelihoods.

What IKEA and the rest of us needs is a China Virus vaccine (invest in that, IKEA). What we need is a massive rejuvenation of commerce. What we need is massive economic activity to fix a historic global sovereign government debt, deficit, and looming fiscal fiasco which may ultimately destroy all our economies and our whole way of life. What we do not need is more superfluous “activist” crap which is actually ruining our nations and stalling the needed recovery — the very recovery which will continue, as it has already, to bring “economic justice” and wealth and prosperity to those whom IKEA pretends to suddenly — all on their own! — care so much about.

If you’re like me, you’ll take no lessons from IKEA (of all people) on any matters of conscience, nor anything concerning “inclusion,” “diversity,” “racism,” “privilege,” “advancing systemic change,” or “social justice.” You’d think that as a mature company, they would have the self-awareness to know that. Instead it seems like it’s being run by a mob of twenty-something idiots, lacking any mature adult supervision whatsoever.

I’m not alone here either, thankfully. Like me, the customers replying to those IKEA tweets apparently weren’t visiting the IKEA Twitter feed to learn about IKEA’s hot-take on Black Livers Matter, nor even “understanding [white] privilege” or all the “systemic racism” that IKEA has suddenly — just on their own! — glommed onto like mindless sheep, but which, they assure you, they are not a part of. The replying customers were, like me, thinking about their lost time, lost money, and their lost orders, and the commerce they thought they were conducting in good faith, at a time in history when commerce generally, really, really matters. 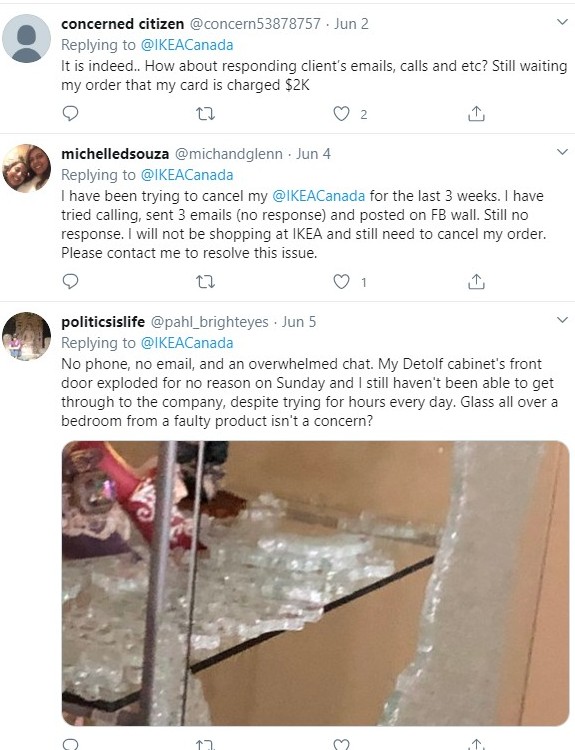 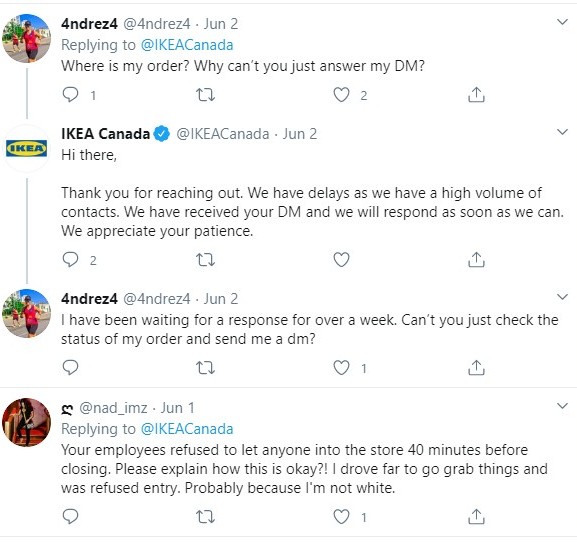 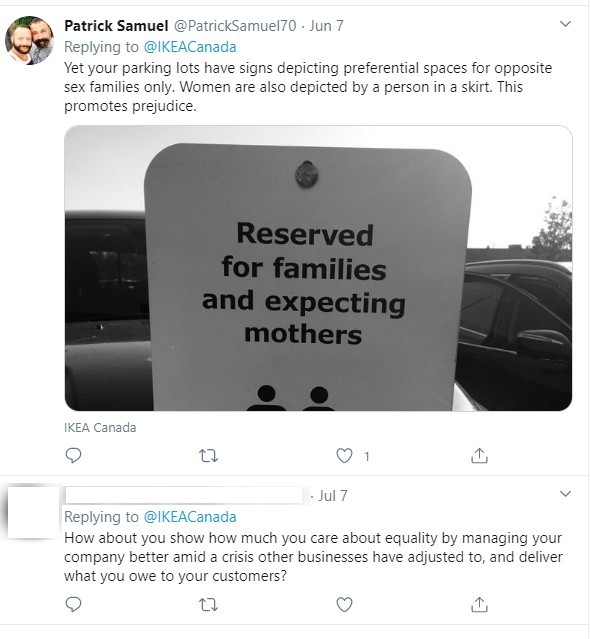 The thing I find so amazing about these immature, trend-chasing, “woke,” herd-mentality sheep-people at IKEA is that they seem, like so many liberals and leftists generally, to blithely and arrogantly think that everybody in the room naturally agrees with them, whatever they say or write. It’s grating. People need to answer back and tell them “no, you’re wrong.”

They are enraging untold numbers of customers; they are helping sew the seeds of division and exclusion and angst in our society, and they are publicly supporting a fascist, violent, politically partisan organization and movement which, among other disastrous things, literally wants to end capitalism, and end the police, and close all the jails, and seeks the end of “the nuclear family structure” — that same family unit that IKEA creates exclusive parking spots to accommodate at their vast capitalist stores. And they are throwing money at these “activists” to help them advance all of that even further, at the expense of their own customers, and of the countries in which they live and work. And they so completely fail to see all of that. Or worse, they know exactly what they’re doing.

P. S. – A story today on the latest arrest and charge of violent BLM thugs and mobsters, whom IKEA would seem to support, after they violently harassed innocent citizens: Three Charged for Harassing Patrons at Pittsburgh Restaurants During Labor Day BLM Protest 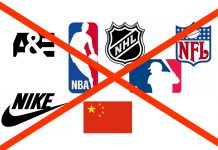 They want to cancel you. Cancel them first.