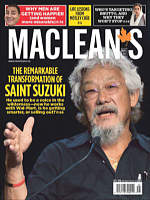 You know how I rightly mock the liberals’ enviro freak-out religion and its pretend prophets Suzuki and Algore? Here’s the latest cover of Maclean’s magazine (right). Difference is, they mean it.

Inside the “Saint Suzuki” edition, you’ll find a huge article about Suzuki and the danger that he might be hooking up with Wal-Mart, an entity which should of course normally be seen as the epitome of Canadian liberals’ axis of evil (American, capitalist, successful…) unless otherwise advised.  And of course Suzuki being a “Saint”, well by golly you are otherwise advised, just this once. 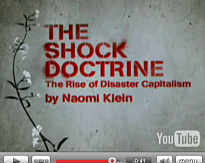 Coincidentally, there’s also a feature article in the mag —an interview with the extreme left-wing, anti-capitalist fundamentalist, Naomi Klein.  At their Maclean’s web site, you can even view a terrific, if Orwellian, far-left-wing conspiracy theory-ish communism-advocacy-ish YouTube video flick made by her.  Wonder if it got

A few months ago, to help you make sense of this fella and his connections, I shared my thoughts with you about him.  I wrote:

As we know, anti-capitalists and liberals and leftists and the radical far-left just don’t have a voice in this country.  ‘Specially not on the state-run media or the state-protected magazine industry.  Showing repeats of Michael Moore’s honest, truthy documentaries 8 to 10,000 times per year on the state-owned CBC “Newsworld” channel in addition to their regular 800 broadcast channels is hardly enough.  They need a platform.  Thank God (see below what they think about God) for Maclean’s magazine and the rest of the liberals’ media division.

By the way, also see the “Maclean’s.ca Interview”: the Sept 27 edition features the socialist NDP’s Dawn Black. Before that: the Liberal Frenchman Stephane Dion!  They currently feature these on their site’s front page for your convenience.  Oh finally!  They’re sure to bash conservatives!  Yummy!

Don’t worry though:  for balance, they also feature things that are directly related to conservatives too: 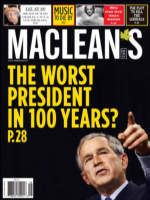 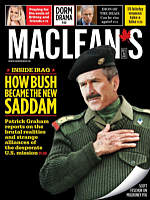 Below, the one on the left is their upcoming November 12 edition.  Can’t wait to see who’s scarier:  Bush or the Islamofascist Nazi dictator Mahmoud Ahmadinejad!  They’re comparable, dontchaknow! 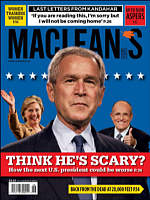 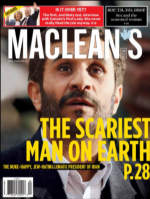 Below:  another religion cover—this one a little different than the Prophet (“Saint”) Suzuki edition… 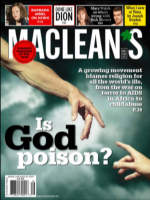