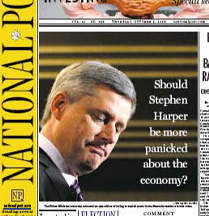 The National Post, in one of the most bizarre questions I’ve ever seen or heard in the midst of a crisis which demands precisely that we don’t panic, uses their front page today to ask if our Prime Minister Harper shouldn’t be “more panicked”.

Meanwhile, overseas, the British magazine The Economist (which is no conservative-luvin’ magazine) suggests today that Stephen Harper and the Conservatives should be re-elected by Canadians precisely because in a zoo full of panic-ridden freak-out monkeys (Dion, Layton, Duceppe, May), Harper alone demonstrates much needed calm and sound, “prudent” policies to get Canada through the mess.

It’s a tepid endorsement at best, but still, here’s a tidbit…

Why Stephen Harper does not deserve to be dumped

… If the voters go further and eject Mr Harper, that, sadly, will not be because they have been convinced by the cerebral Mr Dion’s worthy carbon tax. It will be because the opposition—a gang of four, comprising the socialist New Democrats, the separatist Bloc Québécois and the rising Green Party as well as the Liberals—has succeeded in panicking the voters on the economy (see article). And yet, in a sinking world, Canada is something of a cork. Its well-regulated banks are solid. Growth has slowed but not stopped. The big worry is the fear that an American recession will drag Canada down with it.

Mr Harper says, rightly enough, that his government has taken prudent measures to help Canada weather a storm it cannot duck: he has offered tax cuts and selective aid to help vulnerable manufacturing towns. But it is his seeming non-reaction to what is so far a non-crisis that looks likely to deny him the majority he was seeking, and could even let in the opposition. In what is the first credit-crunch election in a big Western country, Mr Harper’s ejection would set a dispiriting precedent that panic plays better politically than prudence.

Clearly, it’s actually a precedent that all the liberal media in Canada would be well served to avoid, perhaps starting by recognizing that they still drive elections in this country, and that they therefore still occupy a position of national responsibility, and that they have been instrumental in all but instructing Canadians to panic.