Hello conservatives!  And liberals too.

I took a few days off of blogging and made a couple of decisions, none of them monumental.  Mostly, I decided to keep blogging with vigor.  I must blog, and I must do it with vigor—it’s how I do it.  “Conservative….with bite!”  Patent pending.

See the thing is, not a day goes by without liberals revealing their agendas and trying to take over the culture of our Canadian and American society, which they hate, and which they find they must try to mold into something they can finally live with—an endeavor which has been successful to a point, but of course the end is never realized.  That’s “progressive”! 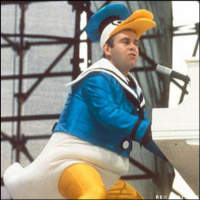 They keep on revealing themselves and their various agendas, which so often revolve around orgasms and sundry hedonistic ventures.  Not an hour after I started doing other things besides blogging this week, Sir Elton John, liberal freakshow,  starting oozing brain poo and proclaimed that all religion should be banned.  Banned!  That’s so that he and his husband can feel better about themselves and their orgasms, which I have no doubt he’d like to display in public one day soon.  Dressed as a duck, or as Jesus.  Joined on stage by Madonna and her Cross, and Howard Dean.

The shrieking left-wing dingbat has been secured, I find, by none other than the anti-American liberals of the Liberal Party of Canada for their upcoming convention.  Yes the Liberals—who erstwhile can’t stress enough how our good Conservative Prime Minister, Stephen Harper, “kisses Yankee butt” all day long in lieu of Canadian liberal media butt.  “American-style” this, and “American style” that—which they vomit out of their mouths in the pejorative, by the way —until it’s time for their Liberal Leadership Convention and massive wiener-fest. Then only an American can stir them up into an political orgasmic frenzy much as Dean did on stage not long ago for his minions.  Last time it was Bono!  I’m not sure if they’re getting stupider or smarter.  It’s actually a tough call.

How can I not blog?

There will be a difference, though.  I’m changing the commenting structure into a new “hybrid” system.  Liberal-left environutjobs will be getting boners as they read this thinking that I’m going to make my blog into a energy-efficient Toyota Prius-like enviroblog, but no, that would be hideous. Instead, I’ve figured out a way of combining the straightforwardness of blogging with the user-ability and discussion-ability of proper discussion forums, and will combine them into a ground-breaking new hybrid blogging thang.

That’s pending two more tweaks and a couple more turns of the screwdriver.  For now, it’s back to normal.

And I’m going to have a beer now.  Sleeman’s Amber Ale.  Cheers!  And thanks for your patience and kind words, y’all.