If it’s Friday, a liberal-left-nurtured activist court in Canada must be ruling against the decisions of democratically-elected representatives of Canadian citizens or the will of the majority, since liberals prefer it that way (no messy free votes involved!).  At the liberals’ custom-built Supreme Court of Canada this morning, a ruling against Security Certificates was announced.

Naturally, the liberals’ state-run CBC and liberalvision channel 391 (CTV Newsnet) breathlessly went to hour-long non-stop live coverage of a pep rally following the decision, presented by a protest banner-draped table of liberal lawyers and “human rights” activists, disguised as and described by the media not as a “human-rights activists’ pep rally” but rather as an official “news conference”.  You see, state-run CBC’s “Newsworld” and CTV’s “Newsnet” cover “news”.  They couldn’t help it if there were, I don’t know, Che Guevara posters all over the room (I didn’t see any but couldn’t see the whole room) and spokespeople calling Conservative cabinet ministers “liars” at their official “news conference” (that did happen). 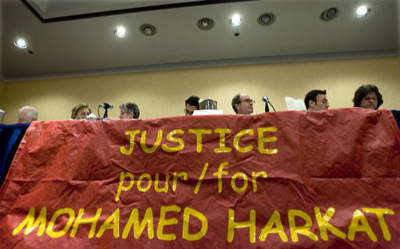 The “news conference” was apparently attended by an ever-so-objective media disguised as a pathologically liberal-left unobjective agenda-driven media/supporters, since every time someone spoke, the audience clapped and cheered and hooted in support, not unlike any leftist rally attended by proponents who routinely celebrate anything liberal—like limiting the power of a western capitalist Judeo-Christian nation to defend itself against terrorism.  The last time the media attended a Conservative government news conference, I don’t recall any such clapping and hooting and cheering from the audience.

As I said, as expected, one “new conference” speaker named Diana Ralph (described as a “supporter”—now that’s authoritative) used the opportunity to blast Conservatives Minister of Public Safety Stockwell Day—informing the media that both he and our security service CSIS “repeatedly lied” in an effort to deny the defendants their due process —even though it is a Liberal government law under which these terror suspects have been held—and for 5 years or more. (Shh!).  When given the chance, no media was heard to question that (apparently factual) “news conference” “news” assertion about all the “lies”.

When finally given the chance to ask questions, CTV’s Rosemary Thompson chose to ask this apparently on-side softball liberal-left appeasing agenda-driven leading question: “We’ve seen what’s happened since 9/11 with civil rights… I’d like one of you to put this into context in a post-9/11 environment what this victory means.”

We never heard from the government’s side in the case at all whatsoever.  And here I thought there were always two sides in a court case.  Apparently the liberals’ media felt as though it wasn’t worth celebrating—err covering—the government’s side.  Of course all that you’d see decorating the place at their news conference would be Canadian flags—and that, as we know, is not the desired effect.

UPDATE 11:42 AM PT:
Yet another “news conference”—this one in Montreal—being carried live at this time in front of another protest banner.  An Islamic authority of some kind is currently bashing Prime Minister Harper as part of his information package to the (once again) clapping, supportive media. 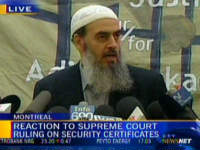