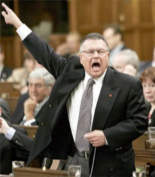 Liberal House Leader Ralph Goodale told Question Period, “there’s only so much you can do to prop up a government that has this death wish.”

He suggested the government doesn’t like what’s coming down the road.

On the economy, the forecasting “doesn’t look very pretty, and I don’t think the government wants to be exposed … for having blown the fiscal framework,” he said.

The Tories left “the cupboard bare” and have no ability to help Canadian industries, Goodale said.

Let’s review the li’l theory that the esteemed Liberal Ralph Goodale has established today with regard to the phantom election strategy of the Harper Conservatives:

1.  The “death wish” Conservatives want to create a non-confidence motion against themselves, to then lose the vote in the House, cause the government to fall, thereby triggering an election, because ” the government doesn’t like what’s coming down the road”.

2.  And since they “don’t like what’s coming down the road”, and since the Conservatives have, in the fanciful mind of Goodale, so “blown” the finances of the country (Goodale must know that is a demonstrable, outright lie, and so it’s also a hideously deceitful opening salvo for the Liberals to advance to Canadians during an election —so good start, Goodale and you “principled” Liberals!) they then want to lose the federal election, thereby somehow saving themselves from being “exposed” and from embarrassment with regard to “what’s coming down the road”.  Or possibly, by logical extension, they won’t even run in the next election.

I suggest Goodale keep his day job.  Whatever that is.

And maybe the liberals’ media could posit a question or two to Goodale with regard to his election strategery brilliance.  (Nah.  I know.  Too radical.)