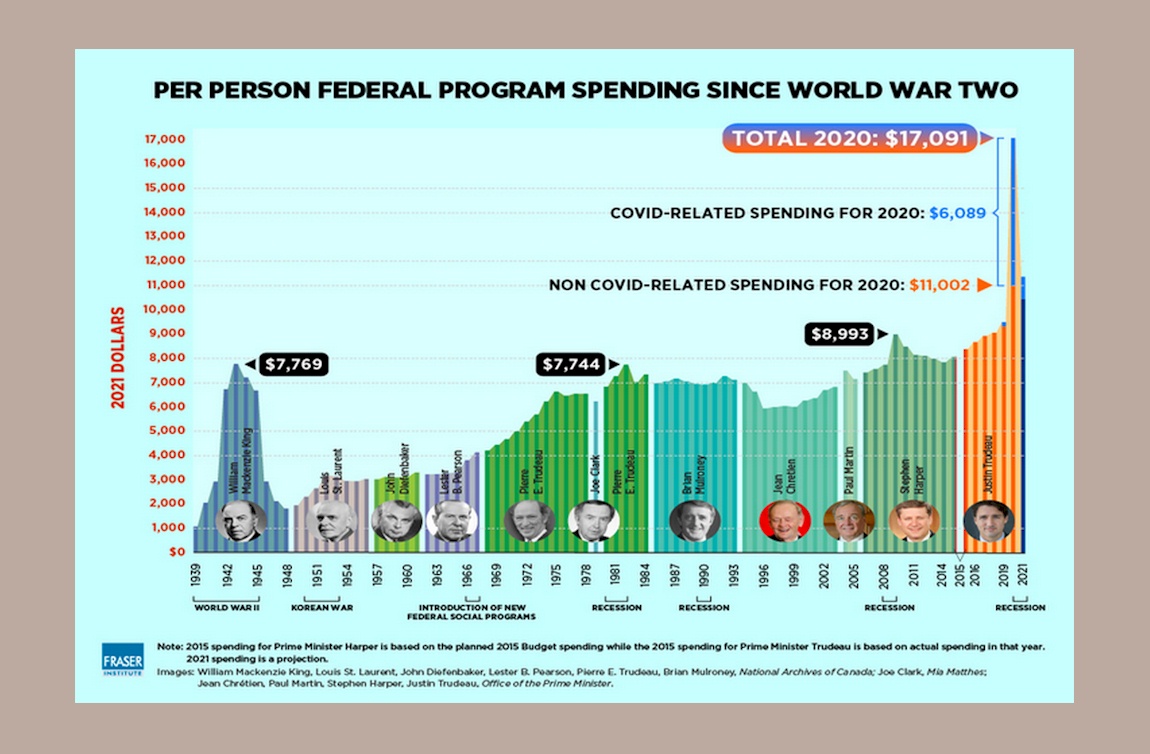 The study, Prime Ministers and Government Spending: 2021 Edition, released yesterday, shows the spending is not all Wuhan Virus-related (or “COVID” as they call it for some weird reason), but rather, it started well before the Wuhan Virus was discovered in China and landed here.

“…There are two primary measures to gauge the size of government. The first is per-person spending. In 2020/21, the federal government spent the largest amount of money per person (adjusted for inflation) in Canadian history by a wide margin. Indeed, per-person program spending will reach a projected $17,091 (in real 2021 dollars), which is approximately double the amount spent during the 2009 recession and at the peak of the Second World War.”

But as you can see in the chart, only (“only”) $6,089 (spending by government per person) is “COVID”-related. Much of the rest is largely Trudeau-Liberal-related.

The Fraser Institute’s Jake Fuss and Nathaniel Li also explain that excessive spending (beyond a certain sweet spot, which has now been well surpassed) actually inhibits the health of the economy and provides no upside  —for us, anyway.

“For these reasons, increasing the size of government between 2016 and 2019 did not produce better results for the Canadian economy. Instead, the Trudeau government oversaw weak performance for income growth, labour markets and business investment—which are all critical to economic growth and social progress.

“Specifically, the average annual growth in GDP per capita (a broad measure of income) was just 0.8 per cent during 2016 to 2019 compared to the 3.7 per cent growth rate experienced during a comparable 1997 to 2000 period under the Chretien government. Moreover, total business investment declined (on average) by 0.2 per cent from 2016 to 2019.

“Clearly, larger government is not always associated with improved outcomes. …”

And news is that the Liberals are planning on an ever bigger, more massive new spending “stimulus” (wink) plan which, will be a “feature” (not a bug) of the upcoming budget.

And also worth noting (since they used WWII as a comparison): Canada is completely, utterly incapable of fighting a world war now, after all that spending, for lack of equipment certainly, but also with our now over one TRILLION-dollar national debt, so also for a lack of funds or economic wherewithal. We’d now simply have to surrender to whoever attacked us.

So the only purpose of racking up all this spending seems to be to grow Big Government in size, power, and control. Power and control… over you. Which you will then be required to pay for. With your money. And your daughters’ and sons’ money.

And if polls are any indication, Canadians are fully on board with this. Which tells me there’s something very strange going on, either with the polling, or with the minds of Canadians.

I cannot explain the way women, in particular, poll in Canada. According to recent polling (and, again, speaking of “doubling”): among women, Liberal support is double that of the Conservatives. Women are more apt to vote for Justin Trudeau and the Liberal Party by a margin of 20 points over the Conservatives. TWENTY points.

I don’t believe that women want their incomes to be completely taxed away to pay for massive spending on who-knows-what (and literally, it is hard to figure out where all that spending has gone, but it’s certainly not to our military, roads, bridges, healthcare, or long-term care facilities); nor are they simply focused on, hell bent on, or utterly obsessed with, on a day-to-day basis, having abortions, wherein Trudeau’s party is certainly the abortion party. Nor are women particularly concerned about ensuring that they’re constantly called “racists” and “white supremacists” and “privileged” “colonizers,” ad nauseum. Nor are women signaling a need or desire to be more and more controlled by government, or have the government exert more power over them and their daily lives and that of their family.

Men aren’t thinking much more clearly in Canada, but I’d love to know just what the hell is going on with Canada’s women, in particular. Drop me a note, below, if you know.

I’m going off on a tangent here, I acknowledge. But even at my age, which is double what it was a few years ago, I still can’t figure out women.

P.S. I followed this up with another article because I can’t get the conundrum out of my mind.

P.P.S.  In a highly related story, Philip Cross wrote in February, in the Financial Post: “Trudeau’s Canada: Low achievement, high self esteem” — saying, “We feel very good about ourselves — but for no apparent reason.”