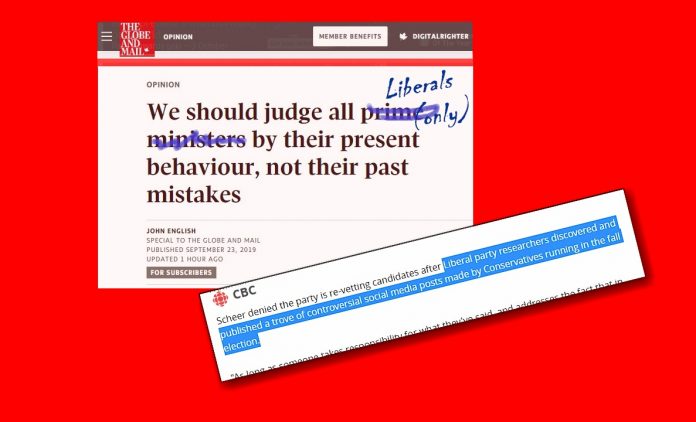 In the ongoing whitewashing and propaganda effort by the Liberals’ news media division to downplay Trudeau’s scandals, the Globe and Mail today publishes an opinion piece you could easily mistake for satire. 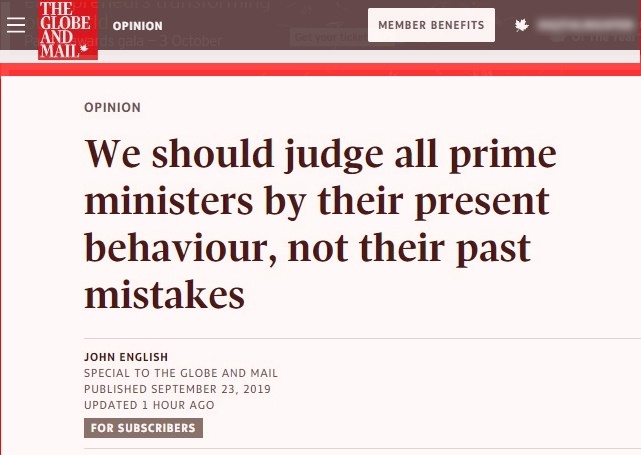 “We should judge all prime ministers by their present behaviour, not their past mistakes”.

I think they’re being serious. We could actually use some satire, but ironically, due to the progressives’ asinine rules, it would land the satirist in grave trouble because some progressive “woke” scold would no doubt find something to “trigger” him, her, or “xe.”

Who is this new-rule-making expert who dropped in just in time? John English. An objective observer? Someone who always touted fairness and objectivity even for Conservatives? Well, not exactly as I see it. He is described in the piece thusly:

“John English has written biographies of Pierre Trudeau, Lester Pearson, Robert Borden, and Arthur Meighen. He served as the Liberal member of Parliament for Kitchener from 1993 to 1997.”

He’s also a member of the Trudeau Foundation, which they don’t mention for reasons.

It’s someone who has the depth of perspective which should enable him to see the tone-deaf timing and cynicism and hypocrisy in advocating for a new and completely different rule, just in time. Justin time, literally.

The old rules that we were told to live by (when it meant taking down and crucifying any non-woke or non-progressive who didn’t kowtow to their progressive dictates), would make Trudeau a “racist” for his blackface fiasco(s), and obviously not fit for office, and a flawed man who should obviously step down and fade out of society forever. Those are their own rules; the cancel culture rules that the progressives have been fraudulently using as a weapon against the right (any non-leftist) for a decade or more.

“…Liberal party researchers discovered and published a trove of controversial social media posts made by Conservatives running in the fall election….”

That was done in order to judge Conservatives on their “past mistakes” and end them. Mr. English please give us a ruling on that one. It’s playing by the old dang rules! It goes against your new rule!

It’s not just Justin Trudeau. So many progressives are getting caught with their pants down, they gotta change the rules. Now it’s “judge their present behaviour, not their past mistakes” all of a sudden when yet another one of their own gets caught-up. It’s not being changed on principle or for ethical purposes, it’s just to serve their power-getting needs. Whatever BS works.

When does “present behavior” actually begin? I want dates. Because I doubt even this will be applied fairly. For instance, this seems like this is all about saving Justin’s butt. Which is because it is.

Not long before the latest scandal, Trudeau lied about his Trudeau/Liberal/SNC-Lavalin scandal. Didn’t hear from English after that, so, “past mistakes,” too, right? I could go on at length about this prime minister, but what about another one: John A. Macdonald?

I missed English’s rebuke of the radical leftist government scolds who run the city of Victoria BC, after they tore down the statue of Canada’s FIRST prime minister, John A. Macdonald. That was all about judging a man today and taking him down over his past mistakes of not mere weeks, nor 19 years, but some 140 years prior; mistakes which none of us are in the position to judge except by the standards and customs of today, which (unlike Trudeau’s mistake) are completely different than 140 years ago. No matter. Take him down. Those are the rules. Well until today. So we need another ruling please. We need to know the actual parameters. And, if I understand your new rules correctly, we’ll be needing a new statue of John A. Macdonald.

It’s all quite confusing. It’s supposed to be. It’s how they cover for it being total and utter BS.

But don’t worry, the author applies this brand new forget yesterday’s “mistakes” standard to everybody, you guys. Here’s how he does it: (Be prepared to be SHOCKED by the names mentioned together in one sentence and more than once, together in a large paragraph, all about these two really comparable dudes!)

“…In both cases, however, it is the present record that should and can be the best evidence of who Hitler was in 1938 or Donald Trump is in 2019…”

Yeah I was just kidding about being SHOCKED. He puts Hitler and Trump together because of course he does. That’s because another rule is do whatever the F works to ruin the lives of those on the right, and get power. “Rules” are actually for you and me, not for them. To the extent they live by any rules, they are different from the ones from you and I are supposed to live by. But manifestly, they don’t live by any set rules.

So continue to be amused by them even when they’re trying to be serious. Think of it as satire. And judge them accordingly.

Previous articleHe has a car.
Next articleSocialized Medicine in Actual Fact: British Columbia Has a 90,000-Person Surgery Wait List