Left-wing politics have subsumed us and our institutions

The progressive Left has turned once-trusted institutions into political auxiliaries.

With Canada’s inflation hitting historic highs and money supply issues causing alarm among people on the right (exclusively), ever wonder who is working at the Bank of Canada? Probably not, but it’s important. It turns out it’s likely much as everything else is these days: it’s likely a bastion of progressivism and ideological lefties.

As part of a US assessment of this predicament, Emre Kuvvet, an associate professor of finance at Nova Southeastern University, did some research into the actual politics of the Federal Reserve. It’s posted at the Wall Street Journal. He found that for every Republican at the Federal Reserve — which is an ostensibly apolitical body — there are 10 Democrats. How’s that for the supposed progressive hallmarks of “diversity,” “inclusive,” “balance,” “fairness” and “equity?”

In the US, citizens can register as Republican or Democrat and in many states, people can refer to those lists to see who’s what. Not so in Canada, so I can only imagine things are worse. Here’s what he found in the US:

I recently set out to determine the political affiliation of every Federal Reserve System economist using various state, county and city voter-registration databases. What I found was that in 2021 the overall Democrat-to-Republican ratio was 10.4 to 1. For every Republican economist at the Federal Reserve System, there are more than 10 Democrats. The lack of political diversity is especially pronounced among the economists of the Board of Governors, where the ratio is 48.5 to 1.

It is not supposed to be this way. As I said, it is supposed to be apolitical. Decisions are meant to be made on the basis of facts, data, empirical evidence, and so on, not political ideology. But obviously, they are not.

Congress mandates that the Federal Reserve promote price stability and full employment. Yet even as inflation rages, the Fed’s economists increasingly have been focused on issues such as climate change, race and sex discrimination, and economic inequality.

Leaders of some Fed banks, such as the Federal Reserve Bank of San Francisco, are more outspoken about politically charged issues. Its president said in 2019 that “the impacts of climate change” affect the Fed’s “core responsibilities,” and “climate change is an economic issue we can’t afford to ignore.”

The renewed anti-racism movement that followed in the wake of racial injustices in the summer of 2020 highlighted the continuing need to recognize and address the harm and inequity that affects the lives of Black and other racialized Canadians as well as Indigenous Peoples. …

… Pride: creating a community of LGBTQ2S+ employees and their allies, raising awareness and providing education and social support on related issues

I’m not sure how that controls inflation or keeps our economy safe from collapse.

Emre Kuvvet goes on in the WSJ article explaining how it’s not just bad now, it also bodes very poorly for the future of ideological diversity in at the Fed —and by my own logical extension, every other institution:

Partisan leaders, either subtly or directly, can encourage staff economists to conduct conferences and seminars and publish research on politically charged topics. Economists who don’t share outspokenly partisan leaders’ ideology may find themselves unwelcome, resulting in the bank becoming even more partisan over time.

While the author doesn’t speak to issues in Canada, I figure it’s got to be much the same or worse in Canada, where Liberals have dominated for generations, and have become increasingly strident and outspoken in their purely ideological pursuits. You only have to look at the mess surrounding the Liberal government’s Wuhan Virus response which, it is increasingly obvious, is based on pure politics; or the mess surrounding our energy needs and its cost today — pipelines or the lack thereof, for example — wherein we import oil from nasty places like Russia and Saudi Arabia when we have our own oil right here. These are pure political plays, not based on science or logic or sound economics.

Canada’s central bank, the Bank of Canada, has a similar mandate to the Fed: as defined in the Bank of Canada Act, it is “to promote the economic and financial welfare of Canada.” Do you really think that’s all they do, given what I’ve pointed out already? Do you really think the state-owned CBC is a balanced “news” media outfit even though its mandate — similar to that of the Bank — is to be just that (“programming that informs, enlightens and entertains”)?

Monetary policy has become increasingly political, with conservatives seeing its importance in curbing the money supply and reducing “Justinflation,” as they rightly call it, and progressives like Trudeau seeing it as a tool to further his political agenda with massive increases in money supply, spending it on social programs and increasing government control over our lives.

Justin (“You’ll forgive me if I don’t think about monetary policy“) Trudeau rarely fails to imbue every single issue with his progressive or woke ideology, and though he has made no bones about his supposed disregard for the Bank of Canada, deficits (the budget will balance itself”), or inflation, he has his deep red ideological thumb on the scales of every institution, I suspect.

It’s somewhat worrying that even in the Conservative ranks — I should say “Conservative” with huge air quotes around the name in some cases — there are those who engage in lobbying to skew politics at the bureaucratic level, sounding every bit the Liberal in tone and substance. Look at this set of tweets:

People can argue all day long about whether the recently-announced Conservative Party leadership candidate Jean Charest is a liberal or not, and thus is not fit to be the leader of what is supposed to be a conservative party, but here he is shown (if it’s all true, and I suspect it is) to be literally working in the service of the Liberal Party with regard to controversial tax policy in Canada, and very political orientation towards climate change and carbon taxes and even adjacent legal — criminal — punishments against citizens and businesses who have, if I may borrow from Trudeau at his most un-diverse worst, “unacceptable views.”

If you bet a Jean Charest would augment the conservative weighting of such things as the Bank of Canada in pursuit of his political climate change policies or his other notably lefty goals, you’d be making an unwise bet I suspect.

If money-man Michael Campbell is to be believed, and he is, this is very concerning. This program of building progressive politics inside of apolitical institutions may be coming to a head: 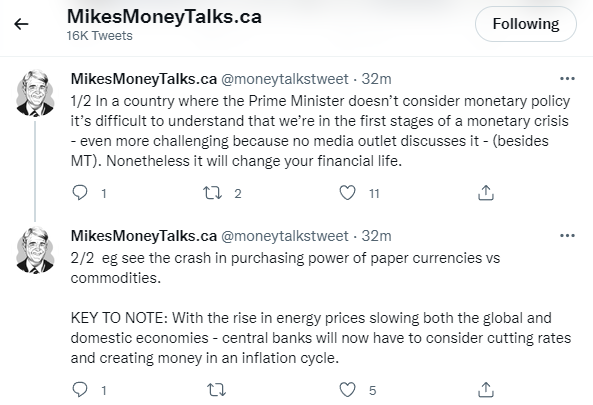 A few years ago this wasn’t the issue that I see it as today. Today, I see left-wing politics being openly inserted into nearly every facet of government and industry and media and education and finance and life writ large. Whether it’s the politics of climate, or the never-ending woke nonsense, the multiple levels of “gender” idiocy, ginned-up racism issues, energy development in Canada (or our dependence for it on bad actors), government or public-sector pension fund investment decisions based on politics (see Bank of Canada’s website section on “Greening our pension fund” – where they write that “We are working to integrate environmental, social and governance (ESG) principles into the management of the Bank of Canada Pension Plan”), teachers’ unions and education matters now completely bent by woke political considerations first and foremost in many cases, the judicial system being replete with liberals and progressives of various intensity, taxpayer funding of “news” media, and more. Politics — and notably left-wing politics — is now central to the mission.

And Justin Trudeau presumes to speak to threats to democracy and the creep of authoritarianism.

I could go on all day with fresh examples: 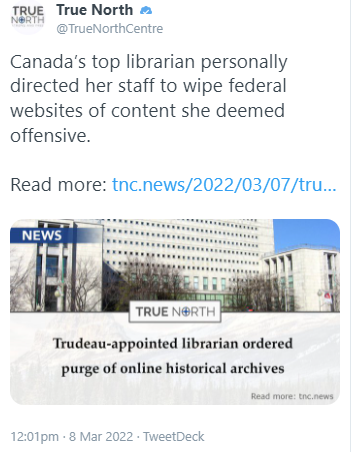 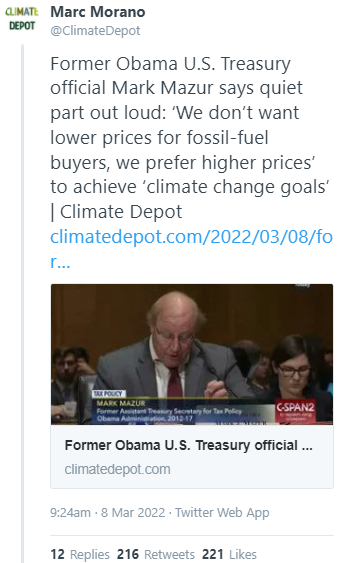