“Labor Day”? This union sounds like a bunch of communists to me.

How is this capitalist?
This big labor union boss, Darryl Walker of the multi-billion-dollar BC government employees union, takes out a full page ad on labor day and announces that big government getting bigger and “investing” (that’s socialist code for taxing “the rich” and spending it—spreading the wealth — on “the poor” and “working families” or those who chose not to work; thereby growing government even bigger and reliance on and government control over our lives even more), in “public services” (that’s code for big socialist-style government-owned and run “services” that are designed to take the place of personal responsibility and family), is the very best way to help families (by which I think he means “union families”) and “stimulate” the economy?

This is WRONG on so many levels that even a North Korean government economist could see it.  And moreover, these people sound like nothing more than a bunch of little communists to me. 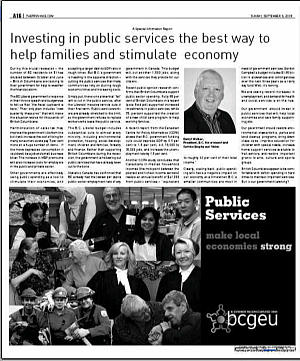 In juxtaposition, I feel as though freedom and free markets is the way to go.  Cutting government down to about one-quarter the size it is now and chopping taxes and stopping government spending and its meddling in every facet of our lives, and limiting the scope and size and intrusion of governments by way of articles in a constitutional …is the best way to stimulate the economy.

And I’m dying to know: who are the useful idiots who agreed to pose for this far-left labor union/political ad?  Clearly they subscribe to the far-left socialist mentality and politics of the you’ve got to be kidding party (the union virtually owns the NDP).  This ad criticizes the current BC Liberal government by political name.  Among the participants, we see a couple of what appear to be law court judges or at least officers of the court (great!… nothing could possibly go wrong here!)  And others appear to be totally random (albeit by amazing coincidence, they’re perfectly laid out in politically-correct numbers and varieties of sex and multicultural mosaic ethnicity, etc) government employees, as well as totally random citizens. 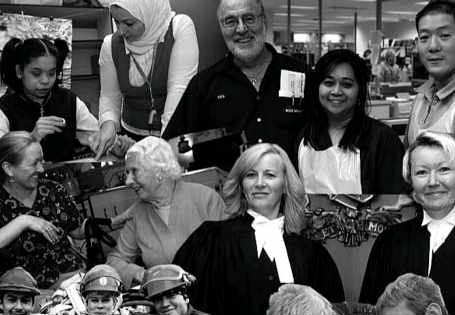 ITEM TWO:
Don’t they know the difference between business and government in the mainstream media any more?  Maybe they simply yearn for there to BE no difference.  Otherwise I wouldn’t have to keep pointing this out.

How is an article which is all about federal government taxes a “business” section article rather than a general purpose news article that all Canadians should read about?

Vow to cover the tax shortfall with some, um, different taxes, even though the taxpayer is tapped out, vote for me, and by gum, it’ll be fine.  Very briefly, in liberal-left led BC, a massive 100% taxpayer-funded and of course government owned and run secretariat known as “Translink” runs —or fails therein to run— the public transportation systems.  When the BC government recently decided to introduce the harmonized (federal/provincial) sales tax next year, the Translink politburo figured they’d lose $57 million in tax revenue as a result of a related repeal of parking taxes (a move deemed necessary so as to fit into the harmonized tax regime scheme, although I can’t explain this if even if I were given a huge government grant to do so).  Also note that Translink is run by various BC mayors and other government nobs who appoint themselves to Translink to run it (or fail to run it therein).

So follow the logic of the Translink and government politburo apparatchiks, in the Province article headlined “Minister vows to cover $57m TransLink shortfall”:

…TransLink commissioner Martin Crilly said last week that the authority could be looking at service cuts unless mayors find a way to generate revenue via higher fares, taxes, tolls or a vehicle levy. …

Then few words later in the article:

… “It is a clear case of how the government brought in the HST without giving any real thought to how it affected many areas,” Bains [socialist MLA from the you’ve got to be kidding party] said.

“I think taxpayers are at maximum capacity and there is no more money in the pockets of consumers right now.” …

Just let that ruminate around in your otherwise clear head for a second.

It’s this kind of abject stupidity that explains why we’re in such desperate trouble economically in this erstwhile capitalist country (and continent, and the West generally).  This exemplifies is why we need to reign in governments —and right from the smallest local governments (including school boards and parks commissioners and local councils) on up —all the way up.  We need to vote out people who are this stupid.  And to deconstruct government systems that are this archaic and, well, this typically Soviet.

Other than that, have a fabulous labor day.