Home Columnists Joel Johannesen Keep Calm and Carry On: sage advice from royals in 1929, and... 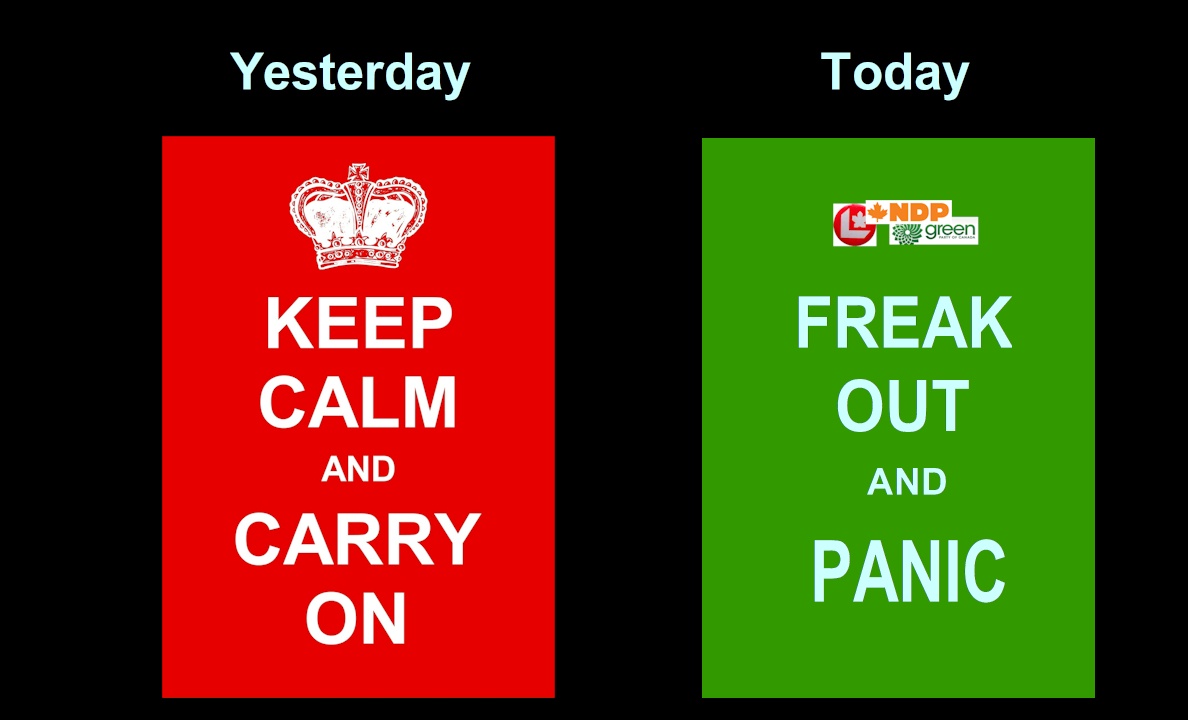 Today, in one of Barbara Kay’s best columns at the National Post, she remind us how true leadership functions best. She is speaking of “the Royals,” here, but I think this principle of exhibiting and encouraging calm, and carrying on with a positive outlook, strength, and courage, should be embodied by all our elected officials too.

Barbara Kay: Prince Harry needs to keep calm and carry on
In tense times, royals have one supreme obligation, and that is to hold it together, to embody hope when all seems hopeless

In conversation with a student at a multi-faith reception during the Duke and Duchess of Sussex’s 10-day South Africa tour, Prince Harry reportedly confessed to being so “overwhelmed” by the world’s problems that he sometimes struggles to get out of bed in the morning. He is particularly afflicted by eco-anxiety. …

… The “green prince” has nevertheless been charged with hypocrisy and double standards. His own Yeti-size private-jet carbon footprint does him no eco-honour. And having “only” two children is not the hardship none would be. The no-sacrifice optics point more to privilege than sincerity.

I love that sentence: “And having ‘only’ two children is not the hardship none would be.”

In truth, what irritates me most about Harry is his public confession of his fears. He seems to be channelling Swedish teen climate activist Greta Thurnberg, whose terror of an imminent climate apocalypse has us all mesmerized. Greta hopes her own dread is contagious. As she said in her recent UN speech: “I don’t want you to be hopeful. I want you to panic. I want you to feel the fear I feel every day.”

This stoking of fear and panic is on vivid display in today’s election campaigns, where not only are politicians stoking fear, they are relentlessly pressing the panic button in their attempts at literally freaking Canadians out.

… I don’t believe infecting an entire generation of young people — or anyone — with terror is helpful in a perceived crisis, because panic tends to repress our cognitive function, the very thing most needed. But Greta Thunberg is a private individual expressing personal opinions, not a supra-political national avatar. When a prince expresses fear — well, that’s royal over-sharing. …

This Barbera Kay phrase is key: “…because panic tends to repress our cognitive function…”. She’s absolutely right of course, but, see, I don’t think this is any accident or that it is accepted by innocuous politicians as an unfortunate byproduct of their “truth-telling” (gag), nor is it mere collateral damage by benign politicians trying to get elected. I think it’s totally by design. It’s a political strategy. It’s a ploy. They want panic, and they want people to lose their cognitive ability (and I’m not talking about the Liberals’ superfast push to legalize and sell pot, but yeah…).

Similarly, they and their cohorts in the media stoke the notion of racism in Canada (beyond its real dimensions), gender division, class division, income division, an impending global environmental catastrophe, etc., and they do this all day long. This gaslighting is purposeful. It’s panic and resignation-inducing. It is then left to us, the calm sensibles, to reason the affected out of it all — an almost impossible task as many of us who have tried to discuss, well, just about anything with many liberals (and certainly any leftist or eco-warrior), have found out. There is simply no reasoning with some, especially those panic-stricken people.

The left are relying on the principle that you cannot reason a man out of a belief he was not reasoned into.

Too cynical, you say? Perhaps. But if you used your calm reasoning, and thought through some of the election campaign promises — especially those coming from the left and far-left, it would ruin their campaigns. You wouldn’t vote for them. You’d see the massive national, unsustainable debts they would create which would stifle today’s youth tomorrow; but they would also cause a change in Canada’s culture and heritage and its social fabric to that of a true government-planned economy, something approaching a totalitarian nanny-state or welfare state, and a culturally confused, nondescript country of freaked-out, entitled stupids in every language. Not to cause you any panic!

Think about things they say, and they lose. They know this. They don’t want you to use your cognitive abilities, they want you to freak out. To absolutely panic. And then to vote for them to relieve the stress.

They don’t believe half of what they’re saying. (Remember: “And having ‘only’ two children is not the hardship none would be.”) It’s all about getting power. And panic test-markets well — damn the consequences.

So, don’t let them sucker you. Keep calm, and carry on.