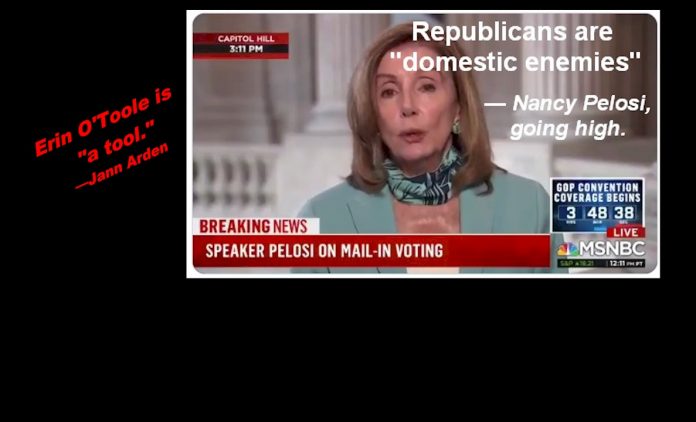 Charming, charming ladies. Some might call them “nasty.” Wouldn’t these ladies agree that they’re nasty? I mean they are trying to be nasty, right? If I didn’t call them nasty, they’d be mad! They’d probably call me sexist.

They go nuts when President Trump says something nasty — or calls a woman nasty — but then they go ahead and act as nasty as they possibly can. It’s just weird. Hypocritical, stupid, and weird.

Erin is a Tool.

Jann Arden (sorry: jann arden) calling the new Leader of the Opposition “a Tool” is nasty, but it’s also embarrassingly childish. It’s anti-intellectual, like children tend to be. It’s disrespectful to say the least. O’Toole, just hours earlier, won his long drawn-out and COVID-difficult exercise in true-blue (if I may dare say the color blue) Canadian democracy, which you’d think she’d support. I don’t expect a “Way to go! Congrats! Good luck!” from her, but this is truly tone-deaf. Her clearly hateful name-calling also displays a lack of even a modicum of respect or compassion for a good Canadian family man who, before that leadership campaign, spent his life serving this country — her country — in the military and in civic life. And moreover it betrays a lack of tolerance from one of the members of what we’re told is The Tolerant Set. And why? Simply because she hates him politically. So it’s a word (“Tool”) that reveals a great deal about Jann Arden, and nothing about Erin O’Toole.

Former MP and minister Tony Clement said it more succinctly than I:

I understand she has a gig on CTV. I wonder how CTV sees this cheap, intolerant, divisive, partisan political slight from one of the stars they’ve invested in, but who now might appeal to less than half of the viewership she might have.

But it doesn’t even come close to Nancy Pelosi getting on national television (well, MSNBC) and calling Republicans in the White House and the Congress “domestic enemies.” What do we call that? Not criminal, per se, but for sure it’s what they themselves used to tell us was a very wrong thing to say about people. “Morally wrong,” they said. When Trump said some in the fake news media were “enemies of the people,” he was wrong to say it. I agree with his sentiments about the media, but that verbiage has connotations that are just wrong; it is unacceptably extreme. Pelosi told us all that under no uncertain terms! I agreed with her then, even if she is my political opposite.

Certainly what Pelosi said here was in very, very bad taste —like egregiously bad. It shows extremely bad judgement from someone — and whose party— is increasingly challenged on that front. And no, she didn’t walk it back or apologize after she thought about it. Pelosi runs about with her hair on fire whenever Trump says something “mean,” or “stupid,” but then she goes ahead and says an incomprehensibly contemptuous, ardently stupid thing like that. It’s hypocrisy on stilts.

It is beyond just “nasty.” Particularly when it comes from the increasingly unhinged Nancy Pelosi, what with all her power and her bully pulpit. Arden is what the ever-so kindly and prescient Barack Obama would call “junior varsity” —a term he hideously employed to wrongly describe the Islamist terrorist organization ISIS, before he clued-in that ISIS was actually a huge terrorists force that he had to reckon with; real, live enemies, both domestic and international. (In this case, mercifully, Arden truly is a junior varsity insulter compared to Nancy Pelosi).

Big-League Pelosi likening Republicans to Islamist terrorists is beyond merely unhinged. It’s literally deadly dangerous — and not just to “the conversation,” and to “the national dialogue,” and in controlling the increasingly vitriolic rhetoric that has consumed much of the political debate, although it’s all of those things in spades. No, it’s also physically, deadly, dangerous. Like national security dangerous, and dangerous to individuals —and it’s particularly and carefully calculated to be for those who are specifically Republicans. Again, we know they agree with what I’m saying, because they’ve said so before! Alas, we also knew they were hypocrites, before.

From Republican Congressman Steve Scalise, who was shot-up, maimed, and very nearly killed (along with other Republicans playing baseball) by an unhinged Democratic Party supporter who learned from Nancy Pelosi and other charmers that Republicans were evil: “Disgusting: Nancy Pelosi just called Republicans “domestic enemies.” I was shot because of this kind of unhinged rhetoric. Where’s the media outrage?

I was shot because of this kind of unhinged rhetoric.

Indeed, where IS the media outrage? Well I’ll tell you where. It’s hiding in a big nasty box marked in huge letters: “QUIET! MEDIA SUPPORTING DEMOCRATS!” In smaller writing: “We’re literally showing support for deadly dangerous or merely jejune rhetoric by not following-up on it and calling it out when —but only when— we agree with it and support it. Damage to democracy, to the national conversation, to political dialogue, to democracy,  and to normal human interaction be damned! There’s a war against our enemies to win!”

That’s if I understand all the hypocrisy — and all their dishonesty — correctly.

Previous articleErin O’Toole I wrote this other article for you
Next articleCTV News relies on “CNN FACT CHECK” of Melania Trump. Seriously.