It’s a Sunday Confession: I like watching the liberal on liberal action

Forgive me Father for I have enjoyed the liberal on liberal action between Rosie O’Donut and Donald Trumped-up.  There’s nothing like gazillionaire liberals shouting premature epitaphs (hideously lame ones at that—a couple of 14-year-olds could have a better name-calling match than those two lame-brains) at each other in public to help us catch a break from all the liberal media’s pathologically incessant Bush and Iraq War-bashing and hatred and abject intolerance toward everything not liberal-leftist or contrary to the teachings of the church of liberalism. 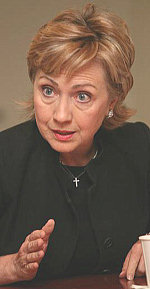 I’ve also enjoyed the more recent Hillary Rodham slash Clinton vs Barack Hussein Obama liberal on liberal action.  I think it’s funny when a liberal who is caught suddenly wearing a Christian Cross only when she is campaigning to a bunch of maybe Christian voters, betrays some o’ that famous liberal tolerance and calls a guy out for secretly being Muslim despite his claims to Christianity, when literally three seconds later, they both take the Islamofascist terrorist side in the war on terror and hope for and aid in their victory.

Over here on the light side, Father, I enjoy a good conservative to conservative dialogue secretly knowing that liberals are reading it (the liberals, Father —they love the voyeurism!  Let us barf.).  Like the one forming in our Town Square Forums between our brilliant columnist from the east, Salim Mansur, whose latest column anyone can read here, and a long-time regular though mysterious PTBC reader named “parem” who almost daily has a brilliant thought or two.

Those of you who are registered PTBC’ers can jump right to the particular forum thread and read both Salim Mansur’s column and parem’s reply, but for those who aren’t registered for some weird reason and need to be teased like the teasers that you know you are you bad bad teasers (putting that image in your mind deserved 15 barfs, and I’m on it Father), here’s parem’s reply:

If a genie appeared to the Palestinians and gave them a choice of living in a civilized democratic state next to Israel or reducing Israel to rubble and living in the rubble for the rest of their days, they would pick the rubble.

This is not speculation.  It has played out in microcosm over and over.  When Palestinians were given Gaza, they immediately destroyed the Israeli greenhouses (that Americans had bought and gifted to the Palestinians as a thriving business) and brought in their rockets to penetrate deeper into Israel.  These are not people who want to build something.  They merely wish to destroy something, something specific.

That is their mentality, unfathomable to a Westerner.  The Left “deals” with it in their usual “monkey see no evil, hear no evil” way and cast the psychopaths as victims.  Even the right often reasons: “Surely they want a better life for their children?” rather than face the horrible truth, that to Palestinians, the greatest gift they can give their children is not a peaceful life with a better standard of living but a desert free of Jews.  They even choose to sacrifice their children to that end.

To us, it seems irrational.  It has to do with two things:  1) the Koran commands unreasoning denigration and hatred of Jews 2) their Arab honor shame culture in which the “shame” of having been beaten by the people they consider pigs beneath their feet, can only be restored to honor by destroying the swine, not living next to them in peace.

Tragically, this impasse is going to lead to great loss of life.