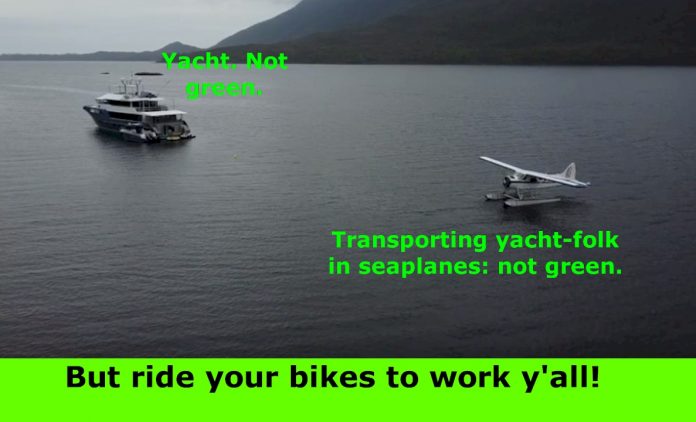 Most people out west know of Vancouver’s ex-mayor, Gregor Robertson. He’s the ex-NDP MLA who as mayor was obsessed with, among other left-wing policies, bike lanes. He and his left-wing council closed whole lanes of major downtown streets and even bridges, and turned them into bike lanes; and even converted a whole street near his former home in Point Grey into a giant bike lane. He vowed to turn Vancouver into the greenest city ever, by, for example, banning all natural gas heating and appliances in the city — “by 2050.” And he vigorously advanced much of the rest of the climate alarmists’ talking points. It was and is his thing.

So I was not surprised that this week he accepted the job of vice-president of a company in the green-building technology business which touts itself as super woke: sustainable, environmentally-friendly, climate change reducing, and several other enviro buzzwords. In fact, it sounds like a great company with a great idea, and is another of the myriad good examples of capitalism at work, addressing the needs of society, improving the world, without government help or mandates (although…). The company is based in Vancouver, so we can presume Robertson will bike to work. That’s good too! 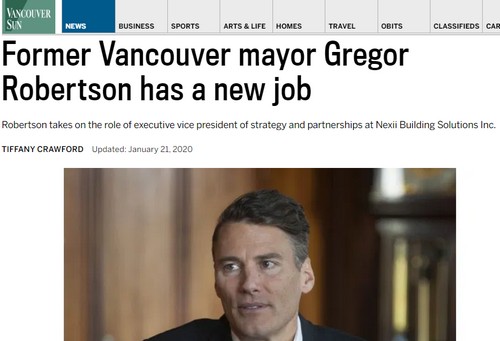 The Globe & Mail explains: “Nexii CEO Stephen Sidwell says Mr. Robertson is an influential advocate for climate action and brings “a unique understanding of how cities, developers and construction companies can work together to provide more sustainable buildings.””

I was surprised when I spent 10 seconds searching for info about the company, Nexii Building Solutions Inc., and found that its owner and CEO, Steve Sidwell, is obviously a huge yacht enthusiast, and captain of his own. That seems incongruous. A little off-message.

Now don’t get me wrong, yachts aren’t a bad thing. I love yachts. I’d buy two if I could. And a jet. But me having those things wouldn’t be hypocritical. I also acknowledge yachts are just about the biggest climate-change bogeymen amongst the naughty toys of the ultra rich. Right up there with their private planes, and way, way worse than your trusty little gas water heater which the government told my parents to convert to from electricity, only to ban gas. And I’m no climate scientist, but I’ll bet the carbon footprint of yachts, during any one summer season, erases years of biking to work by your average nation full of average schlubs.

This particular boat — which is not electric, not sun nor wind-powered — is so big, at 112 feet long, it has its own boat — the 28-foot “Merry Fisher,” with its own Twin Yamaha 200 hp (gas!) motors. It’s so glam that it has its own website. It is so glorious that a yachting magazine wrote a feature article about it. In March 2019, Boat International, a British publication, described it as “34m[eter] superyacht Ascente.” 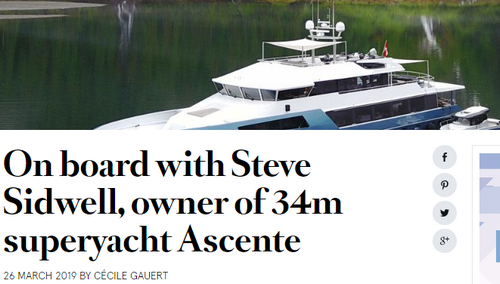 And it’s powerful! Like over 1100 horsepower powerful. “Twin Volvo TAMD 550 hp diesel engines allow a cruising speed of 10 knots, topping out at 14 knots,” touts an ad in that same publication for its sale (apparently didn’t sell, as the article is newer than the ad, but in 2018 it was listed at $6.5 MILLION. I can sadly confirm I did not purchase it). In a conceit of its fuel efficiency, the article reports: “The yacht burns about four litres per nautical mile or 45 litres an hour at 10 knots.”

The Sidwell family reportedly takes trips to Alaska on the boat in the summers. I figured it out as best I could: 2,300 liters of diesel fuel is burned by the yacht for a return trip just to Ketchikan, Alaska, which is mid-way up the BC coast, and about the most southern place in Alaska. A trip to Anchorage would double that mileage. And 2,300 liters of fuel is what you, poor plebeian, would use in two years and six days, driving to work and back in your Honda Civic (except it would be cleaner — gasoline instead of diesel).

It seems from the article that Cap’n Sidwell charters it out when he isn’t using it, ensuring it isn’t just sitting around at the dock and not earning money when it could be out polluting the air and water we breathe, as the owner profits. Smart! But that means it’s not just Alaska trips. It’s used a lot more. Convert that furnace, folks!

There are thousands of these yachts in the world. According to that same publication, “There are currently more than 10,000 mega yachts in the world, with around 150 new yachts delivered each year. Motor yachts are the most popular by far, with sailing yachts counting for less than 20% of all mega yachts in existence.” Thousands times two years is thousands of years of driving. But driving to work is the problem you guys! We should ride bikes! Bike lanes should replace car lanes! And ban all our useless luxuries like gas stoves, water-heaters, and furnaces because that’s the problem!

Well Robertson didn’t ban yachts from Vancouver harbor, nor diesel yacht fuel — just natural gas. So I guess the good ship Ascente with its huge twin diesels is all aces.

One clip in an Ascente YouTube video posted by a Sidwell doubles-down on the carbon footprint, showing a seaplane landing on the ocean and tying-up to Ascente, having delivered or picked up a passenger for quick and dirty transport to or from another place — possibly a “green” rally.

To be perfectly fair, if Sidwell and Robertson and team Nexii build several of what they tout as more efficient, “sustainable,” “environmentally-friendly” buildings, and the buildings actually do save the world from some pollution and excess carbon emissions (and my sincere best wishes in that regard), then it might make up for the yacht trips and help even things out. But you oughta walk the talk. And cruise with those who walk the talk too. Steer clear of the sea of hypocrisy.

It’s still listed for sale. Maybe if this Nexii gig works out, Robertson could buy it and convert it to a pedal-powered yacht.