The irony of this terrible reporting obviously flies right over their heads, at the Postmedia-owned Province newspaper in Vancouver.

Even while reporting about the senate scandal, in which we normal citizens and all responsible media lament the fact that nobody knows who to believe (Harper or Duffy…), on account of there being so many underhanded shenanigans, the Province doubles-down and commits what some might call a worse perfidy and its own underhanded shenanigans. 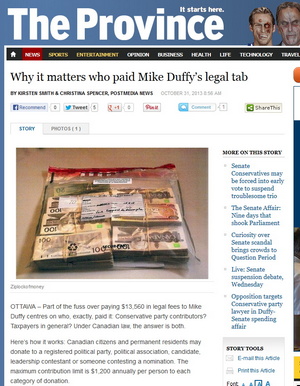 Look at the picture the Province searched for and then chose to attach to their story on the senate scandal today. It is obviously an official-looking police “evidence bag,” full of cash.

You’ve been duped. The photo is a fake, of sorts. It’s actually misappropriated  —  a word which speaks perfectly to the delicious irony, which I’ll expand on in a bit.

So what’s up here? Is the Province mendaciously advancing a political message to its readers?  An anti-Conservative narrative? An underhanded meme, of sorts?

The Province, in an exercise of slimy, deceitful innuendo, put that photo there to make a quick visual insinuation of criminal activity. They presented for its readers visual “evidence” of such. They did it to tendentiously stink the story up with the illusions of mafia-like bags of cash being passed between Conservatives.

Hang on  —  maybe it was just an innocent, albeit ignorant blunder of mammoth proportions insofar as journalistic standards are concerned.

Yeah…no, it was just on purpose. And that, believe it or not, is worse.

The purpose is to lead some readers   —  as many as possible (they even tweeted about it to get more attention)  —  to think even more negatively than they already might about the story, and about the Harper Conservatives. The bar is already set low, to be sure, so it takes quite the limbo. But low-information readers, who became that way thanks largely to deceptive media stories like this one, will surely take that bait and run –err vote– with it.  With ginned-up stories like this, lots of other voters will switch their vote to the media-supported NDP, or to their Liberal Party division, next time around. The media knows that after seeing evidence bags of cash connected to the Liberal Party’s sponsorship scandal, voters did switch their votes to the Conservatives. The media has never forgiven themselves. So here, since none exist, they simply created a fake “evidence bag” of cash. Lots of neat anti-conservative water-cooler banter will ensue.  And there will be high-fives among reporters and editors. 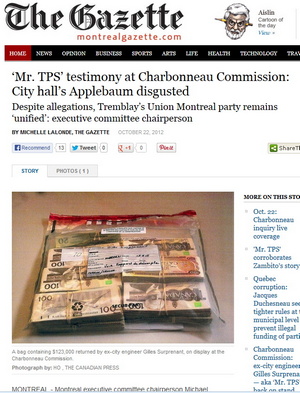 The Montreal Gazette (also Postmedia-owned) had that exact same evidence bag of money photo attached to a story a little more than a year ago (October 22, 2012) — a completely different story.

In that story, that same photo (as seen again at left) is the correct photo  —  it’s the actual RCMP evidence bag full of cash, which the police secured in their criminal investigation of the infamous mafia-linked construction industry corruption in Montreal  —  a real, truly criminal corruption story, which included that real evidence bag of cash.

The caption under that photo reads:

A bag containing $123,000 returned by ex-city engineer Gilles Surprenant, on display at the Charbonneau Commission.

Photograph by: HO , THE CANADIAN PRESS

The caption under the Province story’s photo?

So the Province knew the photo was unrelated to their senate story. But they chose to attach that same photo depicting actual evidence and that photo’s deep, nefarious, criminal implications, on the completely unrelated senate story.

I’m not sure how Canadian Press will feel about their photo being used that way, but I’d personally be pissed if the the news media were wrongly using my photos like that, implicating me in their devious deception of readers. Oh who am I kidding? Postmedia is one of the owners of CANADIAN PRESS. But don’t worry  —  there is no corruption there.

Irony abounds. But that’s not what’s important. It’s far more important to set the media narrative right. I’ve done my best. Before writing this, I called them out with a couple of tweets including this:

I got no reply from them. They don’t care because despite their egregious deceit, I was the only one complaining. That’s some more bitter irony for me.