Home America International Socialist Org to disband? But I thought socialism was a growing... 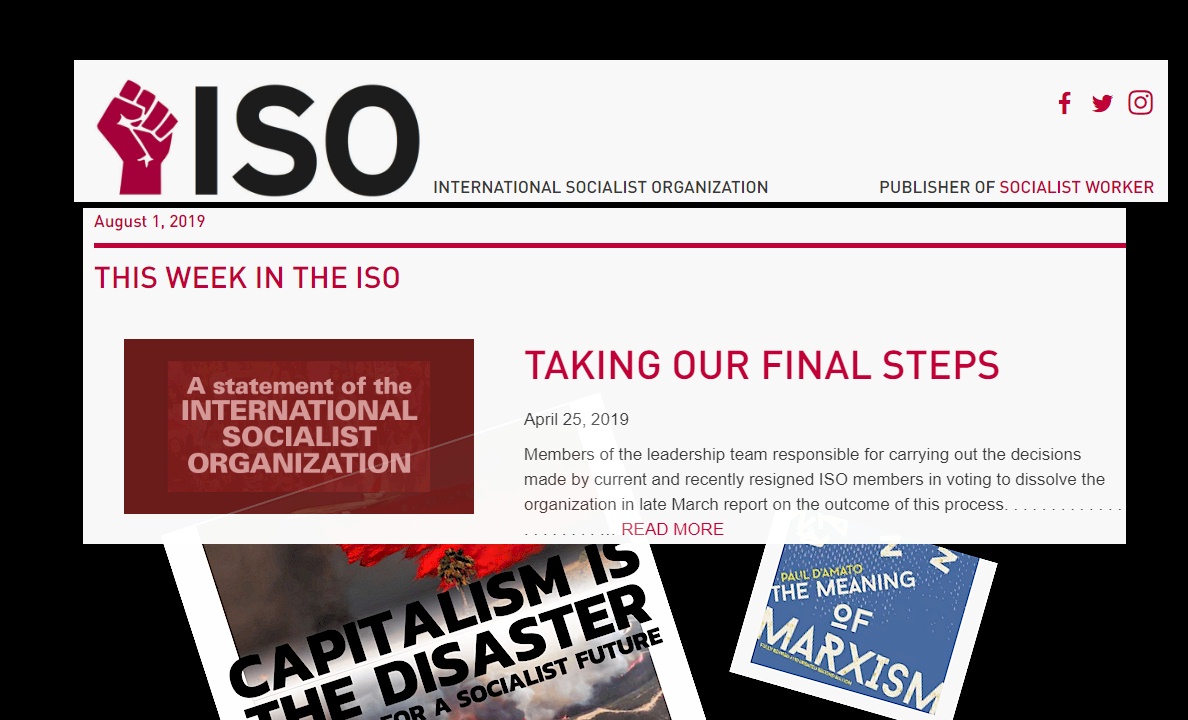 For years — since around the year 2000 — I’ve written about the International Socialist Organization and its SocialistWorker.org online “news”paper. I loved going to their socialistworker.org to read about their latest props to Venezuela and how well the socialist revolution is going, and how communism and socialism were on the rise in the U.S., if not everywhere (one article puffs, “This time, Bernie [Sanders] is also bolstered by prominent socialists like Rashida Tlaib and Alexandria Ocasio-Cortez, whose elections to Congress last year now make Sanders look less like a lone prophet and more like a trendsetter”).

So you can imagine my dismay when reading, today, about the disbanding of this international organization. And the reasons for it.

I admit I’m late to the party on this but then again, it’s not like the mainstream media have covered this story, by which I mean there’s not one single article anywhere. Of course this must be a very sad story for many of them, since it’s likely that many of them were members of the big socialist organisation. And after all, last week, Justin Trudeau visited a gay bar in Vancouver or something, so they had to cover that, right? And they had to get a ton more close-ups of him, ‘n stuff…

MEMBERS AND recent ex-members of the International Socialist Organization (ISO) have decided to dissolve the organization and end publication of SocialistWorker.org over the coming weeks…

But why is this happening? CNN and the CBC gleefully report daily on how the Democratic Party in the USA is moving even further left and even full-on socialist. Trudeau says we need a new state-run “free” drug plan, and other “free” stuff. Alexandria Ocasio Cortez and Bernie Sanders (a “trendsetter”) are celebrated as heroes on MSNBC and CTV because of all the “free” stuff. To hear the media, this extreme-left thing was a growing movement! And yet this:

In the lead-up to [the Inter’l Socialist Org] Convention and since, we have begun to reflect on how a project whose intention is to fight with the oppressed for socialism from below could go so horribly wrong. By way of understanding that, we recognize that we are coming out of a several decades-long period of a Left shrinking and in retreat, and that period shaped the ISO’s  [International Socialist Organization’s] practices, both external and internal. We steeled ourselves to survive amid an otherwise languishing Left.

So much sad. So much face.

We always knew that when it came to war, or “revolution” in their best Bernie vernacular, the extreme left had no fight, but this is ridiculous. According to the trusty media, there was an ever-growing hankering for all that wonderful “free” stuff they’ve been promising for all! AOC is a star! Green New Deal! $100 trillion, whatevs! She’s such a fresh face! So much fresh! So much face!

I suspect a lack of funding, due to the shrinking and retreating and languishing.

But there’s even more inconvenient truth involved to this collapse, besides what you now know from the experts to be the “Left shrinking and in retreat,” and a “languishing Left” thing. Apparently the ISO got caught up, like so many liberals and Democrats, in the #MeToo movement, with a serious allegation of rape within their own executive (er, politburo?), and a coverup of that rape by their executive, and more.

The decisions came in the wake of a severe crisis in the ISO after information surfaced about a horribly mishandled sexual assault accusation in 2013. An independent disciplinary committee at the time came to the conclusion that an ISO member had clearly violated the organization’s code of conduct and should be expelled, but the 2013 Steering Committee interfered with the committee’s work, overturned its decision and effectively silenced anyone who dissented from the course it chose.

Dear God (or climate change, or whatever). And this would help further explain the lack of funding. And no wonder the mainstream media isn’t covering this. It’s just awful for their side! Besides, they’ve been so busy covering fake rapes and RUSSIA! and RACISM! and other fake news, there’s been no time for this real rape stuff.

The ISO is no different than other left-wing organizations, but in this other inconvenient way they’re also no different: it seems they were abusive toward “comrades of color“ (for those of you who aren’t communists or socialists, “comrades” is the prefered commie term to replace “people” — of either sex or imagined gender!). I am sure this was hampering their effort to look “woke.” Or something. Which is the most important thing.

Our expression of regret stems from recognizing that our deficiencies set back comrades of color individually and as a collective, and they undercut our explicit goal of creating a multiracial, revolutionary organization led by people of color — especially young people of color.

Worse, rather than recognizing these destructive tendencies when they were raised and correcting them, criticisms of our mistakes were suppressed, compounding the damage. Thus, despite the fact that comrades of color (along with white comrades who supported them) finally won the debate at the 2019 convention, years of unresolved frustrations made acting on those intentions difficult because of a lack of mutual trust.

So oh my Gaia, comrades. Maybe the CBC (fittingly, being state-owned and totally reliant on their socialist “business” model for their survival, and therefore experts) could do some actual journalisming, and help clear up the confusion. God knows they’ve got the funding.