They say their cartoon is for “teens”, but I don’t know any “teens” who would sit through this clearly juvenile crap.  And at the first opportunity, the abortion experts challenge the oh-so-stupid notion that the only way to prevent sexually transmitted diseases is to not have sex.  “WRONG!” the cartoon blurts out.  You can still have sex —just do oral sex and stimulate each other’s organs, or do some ‘dry humping’, kids!  Don’t worry, that won’t cause nuttin’ and won’t lead to nuttin’!  Just remember, don’t smoke a cigarette afterward like the current President!  (Cigars are another story altogether…).  And for God’s sake, don’t try abstinence!  It’s so stupid!  It doesn’t work!  (And that science is also settled!  *Cough!*)

No wonder liberals and the left are so into taking the reigns of child rearing away from parents and creating a state-owned, state-run government daycare (and “early learning” —wink!) program to plug our kids into.  The earlier they can teach kids to have sex, and abortions, the better.

Too bad they don’t have the science down yet and are misinforming kids. Oh well.  Kids shmids.  The important thing is that we have orgasms. 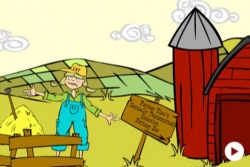 (CNSNews.com) – In an animated video cartoon on its Web site, the Planned Parenthood Federation of America advises teens that taking part in “sex play” and “outercourse” can greatly reduce their risk of getting a sexually transmitted infection (STI).

The cartoon, on the “Teen Talk” portion of the Planned Parenthood Web site, features Tina the Farmer who gives viewers a tour of her “Sexually Transmitted Infections Petting Zoo.” At the end of the video, viewers are asked to take a quiz.

The second question on the quiz asks about protecting oneself from getting a STI.

“The only way to protect yourself from sexually transmitted infections is not having any sex play at all,” the second quiz question asks.

There are two choices to click on to answer: “This Sounds Right” and “This Couldn’t Possibly be Right.”

If you click on “This Sounds Right,” animated creatures representing the STIs run across the screen and scream “WRONG!”

By clicking on the “correct” answer—“This Couldn’t Possibly be Right”—quiz takers are rewarded with the visual and audio message “RIGHT-O” and this message appears:

Planned Parenthood, which, according to its annual report for 2007-2008, got $349.6 million dollars from the federal government, did not respond to repeated calls and e-mails from CNSNews.com asking several questions, including what age group the cartoon is targeting, whether the organization believes the cartoon encourages teens to be sexually active, and if any of the federal funding the organization received went toward producing the cartoon. …