I personally lean toward simply allowing both sides in Syria to lose to each other in this civil war of Islamist extremists. But if I’m pressed to play nice-nice, I’d be in favor of a serious military strike against the regime, with vigor, as I like to say. Hit their air bases and other strategic military structures. And I’d like to have done it long 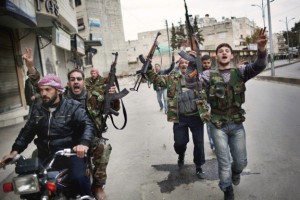 No, not the effete, symbolic gesture that is currently on the table, and will be for another week at least, thanks to the dithering, confused, unfocused Barack Hussein Obama. Had he acted two years ago when there was a clear option for democracy, he might not be the embarrassment of half his own party, the butt of late-night comedians’ jokes, and he wouldn’t need the pathetic pandering and rescue-attempts of the amazingly resilient liberal media sycophants.

Obama can’t sell his “limited, few-day-long, no boots on the ground, message” -type attack (it’s “not a war in the ‘classic’ sense”  —  John Kerry) to me. He can’t even sell it the American people he tries to lord over. Nor even the members of Congress in his own party. If it does pass the vote, it will only be because Obama’s indecision and inaction has left no better alternative.

Leading from behind is not a good way to lead the free world. How many times did we warn you liberals about this?

Jonah Goldberg is as frustrated as many Americans and in fact people the world over. He writes:

…So I am trying very hard to hold onto this perspective as I watch the president of the United States behave in a way you don’t have to be a pan-Arab autocrat to think is incredibly stupid.

Where to begin? Perhaps with Obama’s initial refusal to support the moderate rebels seeking to overthrow Syrian dictator Bashar al-Assad, a puppet of Iran and bagman for Hezbollah. Or we might start with Obama’s refusal to support the Green Movement in Iran, which sought to overthrow the Iranian regime, which would have been a triumph for both our principles and our national interests. …

More than any other politician in the US or Canada, it is none other than Canadian Prime Minister Stephen Harper (Conservative, but only marginally) who has made the best case I’ve heard for attacking Syria, as per Obama’s plan.

Harper  —  not known as anything like the supposedly brilliant orator that Obama is cast as by the liberal press   —  did this this morning, in three minutes, totally off-the-cuff, while President Obama was still stuttering and muttering and “um”-ing and “aaaaand”-ing and “uh”-ing his way through some sort of seemingly tired, last-ditch attempt at a salient defense of his position.

And no, Barack (as he identifies himself to me in his smarmy, over-friendly, yet virulently anti-Republican and extremely-partisan, political sales-job emails), you cannot escape that “red line” idiocy of your own making by blaming either “the world,” as you’ve tried to do, or even George W. Bush, as I’m sure you’d love to do. (Although I admit, as you said, your credibility is not on the lines, as the fawning media will ensure.)

Both sides in Syria are dominated by radical Islamists, with one side being led by the same Baath party as Saddam Hussein. In fact I have no doubt that Syria’s WMDs came from Saddam Hussein and what used to be his authoritarian terrorist state, before George W. Bush rightfully changed history for the better. A welcoming and ever so friendly and like-minded Syria is where Hussein ditched his WMD stockpiles during the several-month-long run-up to what the liberals and their media division tried to sell us as George Bush’s “rush to war.” No wonder stockpiles of WMD weren’t found in Iraq (although we know he had them and used them to even more deadly effect than Assad has). I can’t believe I’m still having to make this argument, as, in 2013, even after we’ve learned lessons, Syria hides their WMDs and prepares, almost as per Obama’s instructions.

Meanwhile, according to numerous accounts, Assad is moving military assets into civilian areas and civilians into military areas, even as the Obama administration insists it makes no difference militarily to wait for Congress to debate. That’s not just stupid; it’s an outright lie that will be fact-checked with blood.

The “rebel” side in Syria is at best dominated by uncivilized, extremist mobs. The kind that hoot and holler and shoot machine guns and semi-automatic rifles in the air to express their… I don’t know what.

That rebel side may be currently controlled by, or could soon be controlled by al-Qaeda. I don’t feel the need to aid al-Qaeda after all the trouble we’ve all been through. Nor am I anxious to see any other Islamist jihadist extremists rise to power when Assad is ultimately offed in Syria, as happened in Egypt with their Muslim Brotherhood.

I obviously can’t count on Stephen Harper to sell my side of the argument. But do what I did: watch a few of the videos I’ve watched. Yes, I’ve watched the post-gas-attack videos which Obama supporters continually point me to and replay on their news programs. I also watched the Saddam Hussein gas attack videos, which apparently left the liberals unmoved. But you should watch the videos of the rebels or what the quixotic liberals still call “Arab Spring” fighters. Watch as they shoot Syrian soldiers in the the head as the Assad soldiers sit on their knees awaiting execution. In another video, watch as a rebel fighter, using his knife, literally carved the still warm heart right out of an Assad soldier, then put it in his mouth to eat it.  Then you might see my point about both sides losing being a win-win.