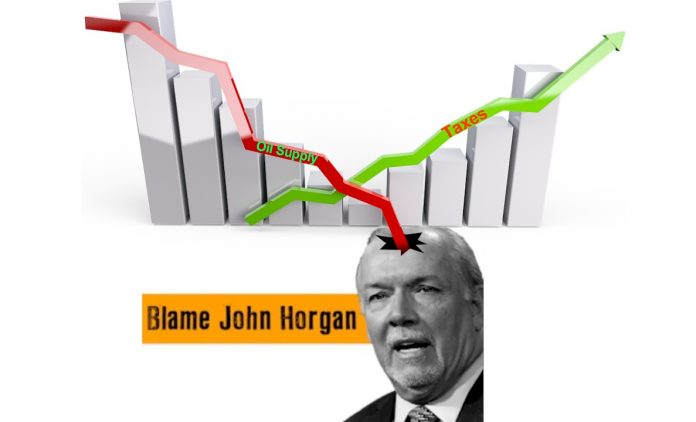 Raising the costs has no effect on the price. Cutting off supply will have no effect on supply, or on price either. Hiking the price to make it unaffordable and thus lower demand, will have no impact on demand or affordability. This is a new economic theory. Also, all revenues derived from a product you sell is just pure profit. That’s part of the theory. And all those profits I referred to, well they just go directly into the coffers of the friends of whichever political party you hate which isn’t NDP.

That’s my read of the gas price situation in Vancouver and BC today, after reading British Columbia’s NDP premier John Horgan’s multiple takes on the mess he and his ideological comrades have created; and by reading some tweets by his lefty adherents. I don’t recommend using any of these economic theories for your economics doctoral thesis.

I find it all hilarious. The NDP and Green-led left have literally protested for decades — sometimes violently, sometimes criminally — against all things oil and gas, so as to lower supply. They rally for higher and higher taxes to make for higher and higher prices to thwart demand (and “to save the planet, wink”). Then when prices rise and regular normal people who are not similarly ideological (and certainly not ideologically far-leftist) can’t afford to go about their daily lives, the NDP government blames them, and as if I had to tell you, corporations. They quickly claim to want gas lower prices, even threatening to force them lower using the big boot of government to regulate prices. Thus ruining all their poorly laid plans to control another part of the free, albeit tax-and-regulation-laden market.

It also makes an ass out of the guy who came up with the NDP’s 2017 campaign slogan, “Make life more affordable for British Columbians,” and their current web page: 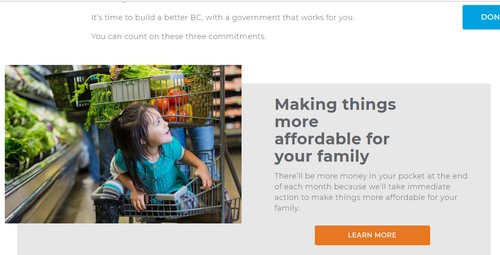 What’s even funnier though is the opposition BC Liberals’ counterpunch. Funny because they enacted the carbon tax and hiked it dramatically before they lost the election; and because of they’ve erected huge billboards, National Citizens Coalition-style, trolling the NDP premier John Horgan wonderfully. These pictures via Chief of Staff to the leader of the BC Liberals, Spencer Sproule’s Twitter account (@SpencerKSproule). Imagine this along BC’s highways after paying $126 for a tank of gas in your Hyundai:

The billboards are far more sound economic theory than Horgan’s. But you can’t tweet this sort of thing which opposes the policies of a leftist or far-leftist like BC’s NDP premier John Horgan, without getting absolutely whacked by the leftist Twitter mob who swarm and, well, say the stupidest things, in manufactured outrage. Look at the first comment. Spot the business school education at work.

Attention anyone who believes this BS, taxes are only about 34 cents out the $1.70 we're paying at the pump right now. The rest is profit for friends of the @bcliberals. #bcpoli

“Attention anyone who believes this BS, taxes are only about 34 cents out the $1.70 we’re paying at the pump right now. The rest is profit for friends of the @bcliberals. #bcpoli“

Let me just re-emphasize this part again: “The rest is profit…”

I really believe many of them actually think this way. Out of the $1.70 retail price, tax is “only” 34 cents (“only” 20%), has nothing to do with the final price; and the rest, my fellow members of the board, is pure profit.

But let’s back up a titch. This “34 cents” is fake news. The 34 cents (per liter!) is only the PROVINCIAL taxes. So nice try faking us out. There’s federal taxes too. Soon, if they get their way, municipal, regional, and, I don’t doubt, even U.N. taxes. But as of now, it amounts to “only” another 19 cents, for a total total tax of “only” 53 cents (“only” 31% of the current retail price). Again, this 30% is tacked onto the price of a liter of gas has NOTHING to do with the final price, according to the left-wing economics and business whizzes and their mastery of business and economics.

Moreover, “The rest is profit!” It’s ALL PURE PROFIT, baby! $1.70 – .53 = $1.17 of pure profit! There are no costs associated with, say, you know, oil exploration, no geological fees or expenses, none associated with eventual oil drilling (and no taxes involved there at all!), no costs at all to transport whatever oil you may or may not find after 16 years to storage facilities, then transport to refineries, then to other storage facilities (and there are no storage costs!), no costs to transport it to market by tanker trucks and trains which by the way are free!, and/or to pipelines (no cost to build them pipelines either! Or to maintain them!), and I’ve missed a few steps but at last of course, there is the retailing of the product at the gas station, which is absolutely free and nobody gets paid anything ever.

I’m only amazed that the price has thus far managed to stay lower than in Europe, given our increasing government hurdles of carbon taxes, provincial and federal sales taxes, transit taxes, municipal taxes, corporate taxes, the environmental bureaucratic morass, indigenous blockades, multiple court challenges by at least a dozen mysteriously-funded-to-the-hilt far-left interest groups and lobbyists, and other inane hurdles. That’s private enterprise at work against some beefy, unfair odds. If the oil and gas companies told me it cost $1.50 per liter just to get it into my car in BC, how could I be shocked?

And so I’ll drive, with a check in hand, straight to the political party HQ that promises to eliminate the ridiculous hurdles, and allows the free market work its magic to bring the price down organically, and to drive further innovation.