The liberals’ Globe and Mail has latched onto another American:  No, it’s not Hillary or Bill Clinton—no Clintons are available today.  And Michael Moore is busy making another historic entry for the world of far-left Hollywood and farther-left Canadian academic liberalism (and what will be a feature on leftist state-run CBC at least 87 times).

It’s the big story on their web site right now.  The most important piece of news on Earth right now (Earth for liberals being Toronto and parts of Quebec, France and Holland).  Their coverage of this even features “Web-exclusive comments” and a video of “Obama’s message”. 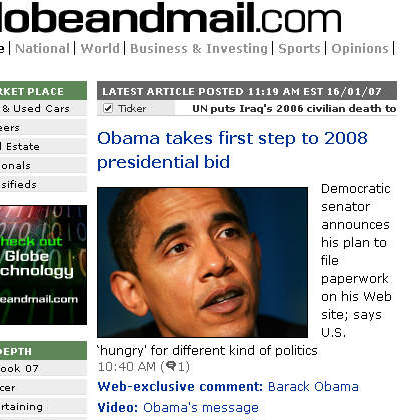 But where were they when Massachusetts Republican Gov. Mitt Romney filed papers?  How about when Sen. John McCain of Arizona and former Republican New York Mayor Rudy Giuliani?

The answer is that they were hiding under their desks.

EXTRA:
The state-run CBC, on its “Newsworld” (“news”—oh my…) channel of liberal-leftist propaganda, is literally falling over itself on this one.  Henry Champ—chief propagandist in Washington—declared that he was once able to “be in his presence” during a speech, and that he “literally takes the oxygen out of the air” (as a result of what one imagines must be all his liberal yummyness).  Their report on Obama lasted longer than any other story as far as I can tell.  Then they started in on Hillary Clinton and her yummyness.  It all lasted more than four and a half minutes.

Apparently no Republicans are running for office.

Just after Champ claimed that Hillary will view Obama as an 800-pound gorilla (OOPS!) in the room, CBC “News” anchor, Nancy Wilson,  then finished the documentary “news” story with this breathless exultation:

Wilson: “Look forward to you and I talking about this many times into the future!”

No, I’m not kidding. 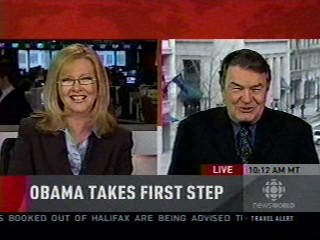