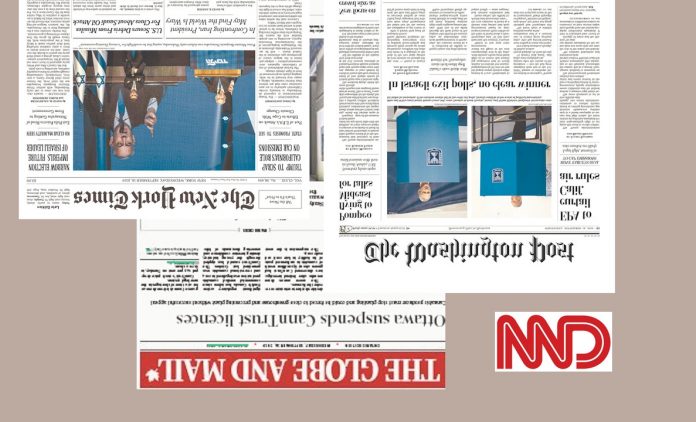 Those of us on the right, or even the center, if we’re honest and objective, know that the New York Times and the Washington Post have become left-wing propaganda rags, reiterating their hate for anything Trump, over and over, every single day, whether it’s true or not, opinion or fact. Many other outlets are no different — they’re just not held in such high, historic esteem. The NYT and the WP were once great papers. They are most certainly not now. They are shills for the left and most assuredly anti-Trump, and anti-conservative. This is simply an objective truth. Some people have not figured this out yet, or are too afraid to admit it. I don’t really blame them. Especially if they’re journalists. Because this is really bad.

After the latest in a long line of NYT “gaffes” (a “gaffe,” made on purpose, ain’t no gaffe, Mr. Martin, hello, wakey wakey), Martin calls them out, but oh so gently, and only because they’ve been caught and called out, and it’s just too damned tough to ignore once again. And Martin only lists a few that he seems to have heard about, out of the dozens, including some more serious, that some of the rest of us know about.

Weird how in the process of calling them out, though, he seems to have already seen the truth about CNN in particular, for some reason (like, not CBC, or any others):

In the online media culture, opinion journalism is taking over. It’s difficult to maintain an image of objectivity. CNN doesn’t even try. Many reports on The Times’s front page, in contrast to the old days, are news analyses. Some are titled as such. Many aren’t but should be.

CNN, sure, but why not the rest? Soon I hope he’ll come around and seeing how CNN is not any different from MSDNC or the Washington Post or the NYT, or the Globe and Mail or any number of other news (now “news”) organizations. None of them try to be objective and honest any more when it comes to political reporting. The pretence of objectivity is long lost.

Make no mistake, this was a program years in the making. Many will argue that “we got Trump” because people had tired of the years of BS coming out of the media and official Washington, not least during the sycophantic Obama years. But still, see, Trump made ’em do it, or something:

The Trump presidency brings with it an impoverishment of standards. If he can make thousands of misstatements, untruths, monumental exaggerations and get away with them – as he has with a big slice of the population – it is the obvious consequence. There is no right or wrong, only people claiming things are right and wrong. Only those who shout the loudest.

As a newspaper of integrity, The New York Times has always been the leading bulwark against this kind of sophistry. To continue to function in that critical role, it has to stop giving Mr. Trump ammunition. It has to up its game.

The wheels fell off way before Trump, but nice try gaslighting us yet again and rewriting history for us dumb-dumbs who supported Trump but are too blind to see the lies.

Despite their recent problems with the truth, and their outlandish bias, Globe & Mail Columnist Lawrence Martin says the New York Times is still the greatest paper ever. On par is the Washington Post. Yup. “For a paper with exceedingly high standards – the best newspaper ever, in my view,” he writes. “The country’s other great newspaper is The Washington Post,” he coos, embarrassingly.

Even though they’ve made repeated massive editorial errors, they still have “exceedingly high standards.” And they’re “great.” This is illogical. And rather sycophantic. But again, I understand. It’s hard to come to grips with a problem this bad.

We’re actually way ahead of you. Ten, twenty, maybe thirty years. So it’s all pretty funny. Martin speaks as if he and his newspaper are now above the fray — above it all — and above you and your dumb perceptions — which is the funniest part of all of this. It took ten or twenty years, but at least he’s somewhat catching up. Next, do CBC.

Previous articleThis is fun: yearbook photo of Trudeau emerges wearing BROWNFACE.
Next article“Any regrets on your site’s name on days like this?” Oh yeah. Thanks Trudeau, liberals, media…