George W. Bush and the Legacy in Waiting

It is the easiest thing in the world to criticize President George W. Bush. So simple and widespread is condemnation of the man that, when one hears some concerned citizen spouting the usual lines about “lies,” “war for oil,” and the like, one wonders what that person thinks he or she is adding to the public discourse. It has all been said before, and it was dopey the first time.

What is far more difficult – harder, even, than finding someone to sing Bush’s praises – is to find intelligent analysis of Bush’s successes and failures as leader of the free world. His foreign policy forays, like the Iraq war, and his domestic policies, like the prescription drug benefit, bear serious scrutiny. But since folks start hyperventilating at the mere mention of Bush’s name, it seems sober discussion must wait until at least the end of his term. 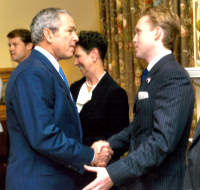 It is often noted that while Presidents Lincoln and Truman were both reviled in their times, history has judged them to be among the strongest leaders in American history. This simply proves Fred Barnes’ formulation that in politics, as in life, the future is never a straight-line projection from the present. Also, it is fair to say that just because people hate you, that doesn’t make you Abraham Lincoln.

What, then, of Bush’s hordes of haters, who imagine him the cause of all the world’s evil? Bush’s legacy to them may be, “Get a life.” For eight years, Bush has been their Voldemort, and their antipathy toward him has defined their existence.

Moonbats have always been among us and their place in history is secure. The legacy of George W. Bush, meanwhile, is less certain. Angry mobs and conspiracy theorists have railed against leaders since time immemorial, and there is little to distinguish Bush’s most venomous detractors from the wrathful wretches of centuries gone by. To wit, while his critics are not unique, perhaps Bush is.

Rarely, if ever, has a president left office with so much of his legacy up in the air. If, for example, Iraq and Afghanistan flourish into free and functioning nations, allies of the United States in difficult areas, Bush will rightly be remembered as the man who liberated over 50 million human beings while strengthening his own country in the process. Such success remains highly hypothetical, but it would be sufficient for future generations to relieve Bush of his contemporary moniker of History’s Greatest Monster.

Conversely, if these enterprises fail, or if Bush’s apparent coziness with Russia’s Vladimir Putin leads to a renewed twilight struggle with that increasingly aggressive nation, this president’s foreign policy must be judged a failure.

Domestically, while Bush’s growth-inducing tax cuts added hundreds of billions of dollars to the Treasury and increased the share of taxes paid by the highest earners, the nation is in the grips of its worst financial crisis in decades. In truth, the current debacle finds its roots in the misbegotten mortgages mandated by President Carter’s Community Reinvestment Act of 1977, if not President Roosevelt’s creation of Fannie Mae as part of the New Deal. But as the man at the top when the bad news came down, Bush bears much of the burden.

Will this president be recognized for his better economic moves or will historians pass him the buck for today’s meltdown? Will his foreign policy look like wisdom or folly to future generations?

In short, is Bush evil and unintelligent, as his enemies claim, or is he the most visionary president in American history? Neither.

Politics isn’t binary, nor are people. Leadership requires choices, and the consequences are often long-term.

Why then has Bush, whose policies cannot yet be assessed in total, become the object of so much scorn? In large measure, Bush Derangement Syndrome began before the man was inaugurated and has less to do with his actions in office than his detractors insist. The Left’s shorthand is that after 9/11, the country and the world were united and Bush squandered that goodwill by invading Iraq. This is bollocks on stilts.

In reality, the 2000 Florida recount divided the country. 9/11 reunited the nation briefly, but folks were soon back to obsessing over the rancour and result of the presidential race. Bush’s majority-vote victory over Sen. John Kerry in 2004 simply added insult to injury for those who felt he never should have been president.

However he got the job, the scope of his actions ensure there is room for George W. Bush in the roll call of the best, and worst, American presidents.

Previous articleBenton Out of Shape on Proposition Eight
Next articleWednesday Newsquips