Frank and Weiner kick Americans in the buns (or is that Fannies?) — again.

My YouTube video which helps explain that the financial crisis was caused largely by that left-wing wiener, Barney Frank (Democrat) and many other like-minded liberal government meddlers into free enterprise (like Chris Dodd, Democrat), who think they know what they’re doing but actually know diddly, is reaching the five million viewer mark.  Hot dog!

But today in an editorial the Wall Street Journal discusses what that wiener Barney Frank and a cohort of his is up to, which seems to be more of the same social engineering and meddling that got us into this mess.  His bun-mate is named, and I’m serious, Anthony Weiner (Democrat, New York).

Strangely, the Wall Street Journal mocks Frank as if he’s a professional mortgage “underwriter” instead of a big fat left-wing “wiener”, which is the direction I’d have gone in.

Back when the housing mania was taking off, Massachusetts Congressman Barney Frank famously said he wanted Fannie Mae and Freddie Mac to “roll the dice” in the name of affordable housing. That didn’t turn out so well, but Mr. Frank has since only accumulated more power. And now he is returning to the scene of the calamity—with your money. He and New York Representative Anthony Weiner have sent a letter to the heads of Fannie and Freddie exhorting them to lower lending standards for condo buyers.

You read that right. After two years of telling us how lax lending standards drove up the market and led to loans that should never have been made, Mr. Frank wants Fannie and Freddie to take more risk in condo developments with high percentages of unsold units, high delinquency rates or high concentrations of ownership within the development.

Fannie and Freddie have restricted loans to condo buyers in these situations because they represent a red flag that the developments—many of which were planned and built at the height of the housing bubble—may face financial trouble down the road. But never mind all that. Messrs. Frank and Weiner think, in all their wisdom and years of experience underwriting mortgages, that the new rules “may be too onerous.”

… The last thing they need is lawmakers like Mr. Frank, who did so much to lay the groundwork for their collapse, telling them to play faster and looser with their lending standards. …

UPDATE:
Drudge Report is on it too, applying the same sentiment as me…. 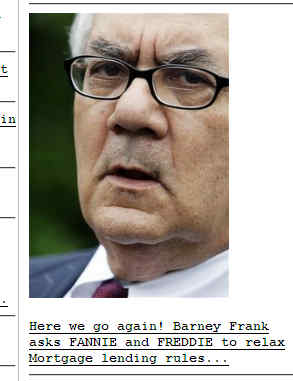 …as is Neil Cavuto on FNC… 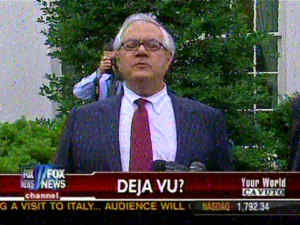 Previous articleGet Back in the Kitchen
Next article$400,000 to Toronto Gay Pride a stimulant too far