Out of the blue, CTV Newsnet leaps onto another gratuitous “news” story about Clinton.  Here’s one from yesterday.  Here’s one from just before that.  But don’t worry, they’re not pushing an agenda.  It’s just that they couldn’t find any footage about a Republican nominee for president who said any words wrong today.

This time, it’s because the husband of Hillary Clinton (whom they heart), Bill Clinton (whom they also heart) is globe-trotting (leaving a massive carbon footprint, but who cares, they’re “progressives”) to raise cash and support for his wife.  It’s news!

This is how they present it with Kate Wheeler at the anchor desk:

First, they provide a scathing news report about how President George Bush is defying all civilized folks, by maintaining what CTV has decided, on their own volition, is the U.S./George Bush “torture” of terrorists, and something which Bush must “defend” rather than, say, boast about.

Thus they come up with this banner across the screen: 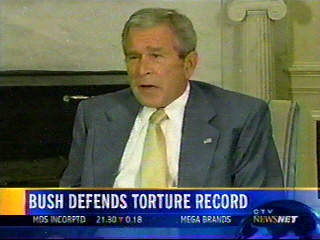 And the scathing story ends with these cheery and ever so objective, fair and balanced words:

”…Authorized techniques include head slaps, freezing temperatures, and simulated drownings known as ‘water-boarding’.  They remain in effect despite efforts by U.S. Congress and the courts to limit interrogation practices”.

They must have thought better of their banner and the tone of their story, because in a later regurgitation of that exact same story, with a new anchor, Cindy Burgess, at the desk, they replaced it with this less hideously biased anti-Bush banner: 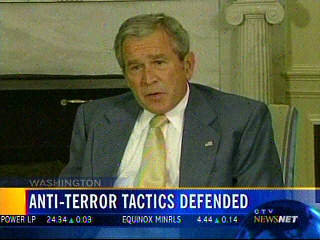 …and they changed the hideously judgmental, biased and unfair, unbalanced wording at the end from:

“They remain in effect despite efforts by U.S. Congress and the courts to limit interrogation practices,”

…to the somewhat more neutral:

“Bush says the questioning is done by highly-trained professionals, who follow U.S. law and international obligations.”

“Former U.S. President Bill Clinton says he looks forward to becoming ‘First Laddie’ should his wife Hillary be elected President.  Clinton joked with reporters in Britain where he’s drumming up cash and support for his wife’s bid for the Democratic nomination.”

Here’s the cheery banner with all the hilarity oh and importance: 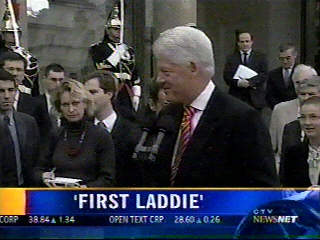 And ends with these sad but hopeful pro-American (liberal-style) words:

”…Clinton says … he will lead efforts to rebuild America’s tarnished reputation abroad.  Clinton says ordinary Americans are concerned about how the world sees the U.S. because of issues like Iraq, climate change, and nuclear non-proliferation.”

Previous article
No More Platitudes
Next article
How stupid is this idea?