CNN Apes CBC: Bias is Over The Top

[dropcap]Y[/dropcap]ou’d be forgiven for thinking you were watching the CBC. But no, it’s CNN. And this is ostensibly not a CNN opinion piece: This is how CNN introduced their “news report” about Trump achieving the 1,237 delegate votes needed to secure the nomination, on Wednesday May 26, 2016: 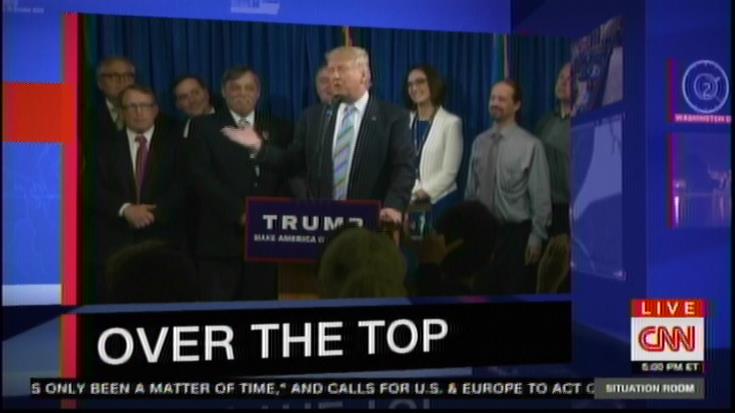 If you think CNN was using the occasion to ever so delicately imply Donald Trump is “OVER THE TOP” with all his egregiously inaccurate and tendentious wordplay, you’re obviously wrong, since if you ever watch CNN, they clearly abhor inaccurate and tendentious wordplay. They bitch about Trump doing it all day long, and if you’re paying attention, among other Trumpian things which are ruinous to America and the American way of life, this wordplay apparently also forces people who are otherwise upstanding citizens (well OK, a great many illegal aliens too) who want America to be a giant “safe space” and want world peace ‘n stuff (and basically mostly just smoke pot) — to violently protest outside of Trump rallies, smashing car windows and throwing rocks at cops on horses.

Yeah, no. It’s just who says it that matters to these people. They, as news reporters, can be the tendentious wordsmiths any damn time they please. Republicans cannot. Got it? Now you’re thinkin’ like a liberal!

After CNN themselves finished being over the top or “climaxing,” as you might say if you, too, were as unserious as them, Wolf and his PAC smoked a cigarette, pulled their big boy pants up, and then had to get on with pretending to be objective reporters, which is a task so not puerile (#boring!). So, using that same picture of Trump, a far more odious banner for them: “DONALD TRUMP CAPTURES THE GOP NOMINATION” more accurately described the actual news. 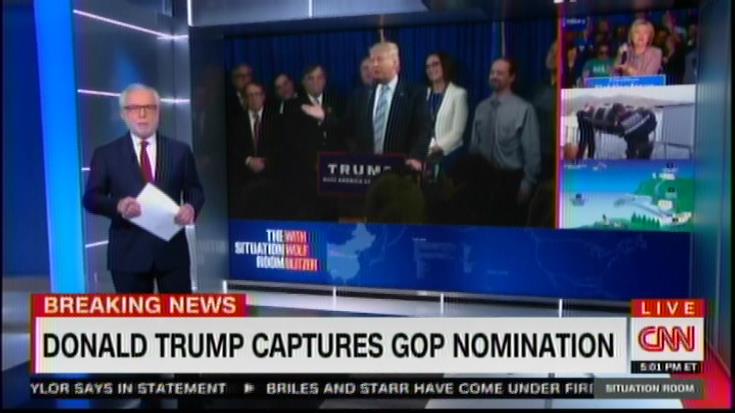 And then those ever so sober and never over-the-top journalists naturally went on, and on, discussing Trump’s words, and his honesty, and how important words and honesty and transparency are, these days.