People have asked what I thought of the Iraq Study Group’s recommendations (OK one guy did), but I hadn’t read much of it until today.  The study group certainly consisted of some stellar folks who are all nice people, I’m sure.  But aside from their stated assertion that the goal should be “success” in Iraq insofar as creating a stable government capable of governing Iraq free of terrorists and murder and mayhem,  i.e., the Bush policy, with which I most assuredly agree, I think they basically proved themselves to be as the New York Post saw them and depicted them in their paper this morning: 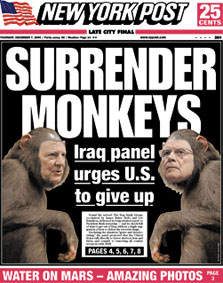 I was surprised and a little jealous to see of of my favorite expressions being used in the New York Post, but where they got the perfect front page, we’ve got “Cheese-Eater”  :CheeseEater:  smileys and “French Surrenderer”  :FrenchSurrenderer:  smileys in our repertoire of discussion forum smileys.

Previous article
New York City Bans Science
Next article
Exactly who made the decision to block Walid Shoebat from entry into Canada?