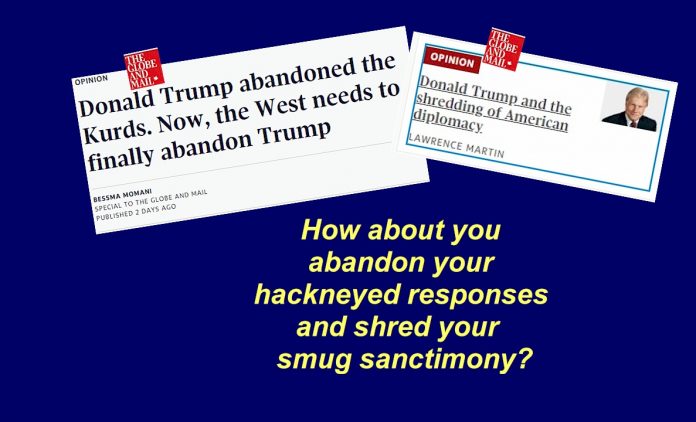 The Globe and Mail headline and the opinion article betrays the worst about Canadians:

The author, Bessma Momani, complains that Trump “abandoned the Kurds,” so the obvious implication is that those American troops were crucial to avoiding some calamity, and Trump is a bad man for removing them. We’re instructed to “abandon” him and take over — “take charge,” as she says in the piece.

So she suggests we do that — take charge — then, right? No no no.

She doesn’t have the balls to suggest that Canada send a thousand replacement troops — and all the supporting air and land battle gear — to replace the 1,000 American boots on the ground and ensure Canada does not abandon the Kurds?

Nope. She won’t bite. She makes no such suggestion. Or even reasons why not. It’s the whole point, but she doesn’t address it. Just “abandon Trump.”

So we need to understand the explanation for either being pantywaists, or for her/our supposed “right” to be totally and absolutely reliant on the Americans, and American men and women soldiers personally, for our safety and enjoyable lifestyles. She doesn’t explain. Just “abandon Trump.”

Hey here’s a suggestion Miss Momani: how about you abandon smug Canada’s usual anti-Trump, anti-American sanctimony and the now tiresome knee-jerk anti-Trump groupthink, abandon also the pacifist idiocy, and moreover abandon the supine tactic of not paying what we agreed to pay to NATO and relying instead on Americans and their lives?

What is Momani’s expert suggestion, aside from “abandoning Trump” for no credible reason other than to just say it like a mindless robot? It’s not to deploy replacement troops, as we’ve established. It is to deploy another globalist government bureaucracy — or two. She makes a pure globalist, quintessentially progressive and liberal Canadian suggestion: send government/taxpayer money:

“Western-dominated financial organizations such as the World Bank and the International Monetary Fund could intervene, providing money on the condition that it [Syria] repatriates refugees in a manner that ensures their dignity and safety.”

After all this warring and troop deployments, who knew it was actually just taxpayer money and a couple of those big global bureaucracies that could have solved this Syria problem right from the start?! Who could have predicted this answer? Hands up!

This is exactly an abandonment of reason.

Who is this expert?

Well that helps explain it. Another academic aligned with the Trudeau Foundation. Again. I’m shocked. The Globe and Mail should be honorary members of the Trudeau Foundation, so reliant are they for their elitist academic, globalist establishment-thinking, incessantly anti-Trump, liberal-left opinion pieces, to bolster their already strong daily lineup of them.

If they were interested in actually helping, they might publish some of what their own readers have to say, instead. Non-academics and non-politicians most often have the best ideas. Like this one in their own comments section:

Joel Banks
What is missing from this commentary is the importance of a proclamation or other intervention by the religious leadership of Islam, an authoritative Islamic censure of the vicious sectarianism which is a major factor in Syria’s savage sectarian conflict. This intervention can contribute much to a “grand bargain” for Syria, in which Sunni & Shia Muslims live in peace and tolerance.

I thought the Trudeau folk were all about the “root causes.” Nope, never mind: TRUMP!

Many commenters here clearly despise the USA … so why should the USA sacrifice blood and treasure to meet the expectations of those who hate them?

Why should USA parents send their children into harms way to help those who scream “Death to America!”??

Why should the USA taxpayer spend a cent trying to improve the lot of those who will curse them … no matter what course of action, or inaction, they choose??

Why should the USA be expected to act as the “World’s policeman” when so few other nations will make any effort to help in that thankless task??

And most importantly … forget Trump, the man … he’s not important. What’s driving this is the political philosophy of Trumpism which is grounded in a theme of ” America first”.

America’s citizens are sick of being considered last by the self-styled Globalist elites who have promoted the endless Mid East wars. The long forgotten middle American voter is saying “Enough!”. You have to change their minds … not Donald Trump’s.

Neither Trump nor America started this war. They really have utterly nothing to do with it except insofar as being, by far, the primary military force and the primary supplier of human capital — fighters — in Syria, with a goal of stopping ISIS. Canada has sent advisors and some aircraft.

Hey how come none of these “experts” and politicians in Canada suggest sending Canadian troops to Syria’s north-east to replace the American troops?

Momami concludes by issuing forth a dire warning of yet another end-of-times, due not to the “climate emergency,” this time, but exclusively to… TRUMP!:

“The tea leaves are fluorescent-neon, now. The West must take charge, without the U.S. – before it is too late.”

Apparently “fluorescent-neon tea leaves” aren’t bright enough even for her to imagine the concept of “taking charge.” Or even being forthright and honest. Because she’s blinded by the herd’s glaring hatred of Trump.