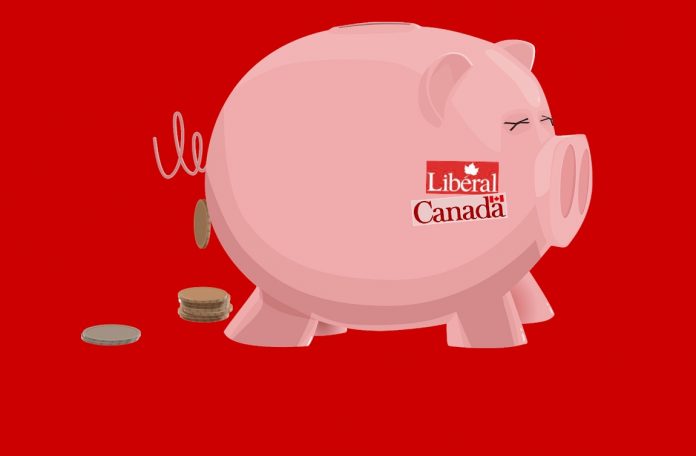 The fallout from the Trudeau/Freeland/Liberal/Vote-Buying Marketers Council of Canada —continues apace, manifestly because the Budget’s tag-line “A Recovery Plan for Jobs, Growth, and Resilience” is actually a lie.

I’ve yet to read a truly positive review of the thing. Not one credible opinion — I mean among those even pretending to be objective (and I’m being quite tolerant, including the Liberals’ very own Globe and Mail division, their liberalvision CTV, and other such objective thinkers), can fully disguise their opaque suspicions that this 700-page tome (696 pages too long) is but an ideologically-driven, vote-buying, economically horrible monster created with little brainpower, by those who think you have even less; and nor is it crafted by people with actual concern for, you know, “Canada.”

Over at liberalvision CTV, Don Martin had this headline on his review: “It’s a stimulus budget all right — for votes in the next election.” What I said.

The Liberals’ Globe & Mail division has been the most positive in its editorials. One of their many reliably liberal-supporting columnists headlined with, “The many myths on which this budget is based” (hint: the headline is not meant as a compliment. As I said: it’s a lie.):

That columnist, Andrew Coyne, opened that one with this: “To read the budget – the first in two years – you’d swear at times it was written in April, 2020, rather than April, 2021. Perhaps this was the budget the government intended to deliver then, before it decided not to bother.”

As to the lies, he goes on: “At any rate its main prescriptions – notably, $100-billion-plus in new spending, including a new national child-care program that will cost nearly $20-billion per annum, between the federal and provincial governments, if it is ever implemented – invoke a number of assumptions in their support that are at best outdated, and at worst outright falsehoods.”

And among those many “falsehoods,” which is a super secret news media code-word for “lies”, he lists this doozy — one which I’ve been on about since the pandemic started. In a word, it’s that it was governments at every level, in every country and within every country but especially at a national level, that caused not only the pandemic, but then this national health and economic crisis, in Canada, and in much of the rest of the world. Add Coyne’s salt to my elixir:

…The economy did not suddenly tank a year ago because of a catastrophic failure of demand. It did so because all levels of government ordered it to. That may have been necessary given the uncontrolled spread of the pandemic. But the pandemic only spread so uncontrollably thanks to the federal government’s multiple failures to anticipate, prevent and contain it: the shuttering of our overseas early warning system; the reliance in its place on false assurances from China and the World Health Organization; the failure to maintain adequate stockpiles of personal protective equipment; the continuing fiasco at the borders; and, as time went on, the dreadful lag in securing timely supplies of vaccines.

So when the minister insists the recession was “driven by an entirely external event,” that, too, is not quite true. The virus may have originated overseas, but its impact depended on how governments reacted to it…

John Ivison of the giant and now (also, like the Globe and Mail) taxpayer-funded Postmedia News corporation (National post, Vancouver Sun, dozens of others all exactly the same) noticed much the same as I did, to wit, that there is little more than negative fallout from this crass vote-buying exercise, listing several very key people who had trouble containing their disdain.

John Ivison: Federal budget criticism that will be hard for the Liberals to brush off

The Trudeau government can brush off such criticism as ideological and partisan. It will find it harder to discount the reaction from an officer of Parliament and from respected economists who have been allies and colleagues in the past.

The critique coming from the Parliamentary Budget Officer, Yves Giroux; from two former Bank of Canada governors – David Dodge and Mark Carney, and from former senior Liberal adviser, Robert Asselin, is that a budget that claims to build prosperity for the future overstates the amount of growth it is likely to generate.

Dodge told the Globe and Mail this week that a budget which positioned itself as being pro-growth does not invest much in growing Canada’s economic capacity at all. “My policy criticism of the budget is that it really does not focus on growth,” he said. “To me it wouldn’t accord with something that was a reasonably prudent fiscal plan, let me put it that way.”

He said that of the $100 billion billed as being a catalyst for growth, he estimates that only $25 billion adds to public or private investment, with the rest increasing consumption.

Those will be painful words for Chrystia Freeland to hear, given Dodge has been something of an intellectual godfather for the Trudeau Liberals. His endorsement of the use of temporary deficits to finance productivity-enhancing infrastructure investments were emblazoned on the Liberal policy platform in 2015.

The finance minister might have expected a more ringing endorsement from Carney, the godfather to one of her children and someone who appeared at the recent Liberal convention saying he would do what he could to help the party.

Carney, he writes, stressed the need to make government “investment or the type of taxes and other measures that encourage private investment to (create) the growth in jobs and income that we need down the road,” echoing the notion that this isn’t about jobs and growth at all.

I wish I could say I was pleasantly surprised by its contents. But it’s a big government budget through and through.

The federal net debt is now expected to reach $1.5 trillion by 2025/26 – and the Trudeau government has no credible plan for balancing the budget or ensuring a healthy post-COVID economy.

Quite the opposite – the budget will result in a larger role for the government in the economy, and our lives, with big promises in infrastructure, “green” spending and subsidized national daycare. All this while largely ignoring the vital and essential role entrepreneurs, innovation and investment play in Canada’s economy.

The term “innovation” appeared four times in the speech – but each mention was related to government programs or government involvement in the economy. Similarly, the word “investment” appeared a whopping 17 times – but, you guessed it, only two referenced the private sector. The remaining 15 mentions all referred to government “investments.”

It is clear that this government is simply not interested in encouraging economic growth. It pays for spending with the country’s credit card and shows a complete disregard for the country’s growing debt….

I cannot imagine what Chrystia Freeland and Justin Trudeau were thinking when they obviously didn’t bother to even sit down beforehand with any or even all of the experts quoted above, all of them far more experienced than her, to craft a sensible, honest budget, at a time like this. But apparently the Liberal Party and those power-craving ideologues within, see themselves not only as The Experts On Everything (as we’ve seen countless times before), but also see themselves as more important than you, your family, your business, and Canada as a whole.

They’re in it for them. And that should be all of the opposition parties’ new tag-line.

Previous articleTrudeau: “There’s an awful lot of work to do.” In America. On “Systemic Racism.”
Next article1st Quarter Conservative Party Fundraising More Than Doubles Liberal Party