Anna changed her mind seconds before she had an abortion

As I mentioned yesterday, Thursday May 10 (at noon) marks the annual National March for Life at Parliament Hill.  Coincidentally I found this story in the Daily Mail from the U.K. today. 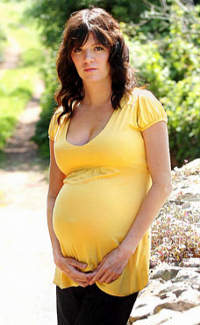 Why I changed my mind seconds before I had an abortion

Four and a half months into her pregnancy, Anna Chernocke could feel the first stirrings of life as she sat in the hospital waiting room.

She placed her hand on her belly and started to talk to her baby, although the only thing she could say was “sorry”.

Minutes away from having the abortion she thought she wanted, each second felt like a second closer to murder rather than the blessed relief she had imagined.

Overwhelmed with guilt and fighting back tears, she was led by two nurses into the operating theatre. The doctor, a fatherly-looking man in his 50s, was sitting waiting for her.

He was kind, reassuring. “Anna,” he said. “Are you ready? If so, we will give you a little injection in the back of your hand and transfer you to the table. Is there anything you would like to say?”

“Yes,” replied Anna. “I’m really sorry, but I’ve changed my mind.” But instead of being annoyed with her for wasting their time, the medical team seemed to be overcome with a sudden, unexpected euphoria.

The doctor broke out into a huge smile, grabbed her shoulder and laughed “Congratulations! Well done, you won’t regret it.”

The two nurses who’d led her into the operating theatre – with, she thought, slightly disapproving eyes – swooped on her bed delightedly and whisked her back to the ward.

One of them told Anna how she’d been trying for a baby for ages, without success, while the other – who had children – said becoming a mother had been the best thing that had ever happened to her.

“You are never going to regret the decision you just made. It’s a wonderful, beautiful thing.”

Just as the nurse promised, Anna has never regretted her decision and his birth in July 2004 has transformed her life.

Now aged 29, Anna is happily settled in Devon with a new partner – whom she first met when David was three weeks’ old – and is expecting a second son in five weeks’ time.

Remembering the doctor and nurses’ thrilled response to her 11th hour decision to keep her baby, Anna says she is far from surprised by last week’s startling survey which reveals that opposition to abortion is growing rapidly among medics.

According to a survey published in the medical magazine Pulse, one in five GPs now believes it should be banned completely and a quarter refuse to send women for terminations because of deep moral objections.

More than half said the 24-week time limit

[Joel notes: this is in the U.K. – not in Canada, where there’s absolutely no limits whatsoever]

should be reduced because medical advances mean babies born earlier than that can survive, and because late abortions are distressing for the woman involved and the medical staff who have to perform them.

[…] Women aren’t told exactly what happens – I wasn’t until I asked – and that played a huge part in my decision.

When I’d first found out I was pregnant, all I could think was that I wanted to be rid of it and I was surprised by how easy it was to get an abortion.

“No one talked to me about the different options and I didn’t receive any proper counselling at all.

[…] “This procedure was incredibly painful and I was terrified, so I asked the doctor what exactly would happen to me during the abortion.

“I had nightmare visions of the baby being born alive and then killed,” says Anna.

“The doctor asked me: ‘Are you sure you want to know? It isn’t very nice to hear.’ She told me they’d find the foetus’ heart, inject it with poison, then once the heart had stopped beating, they gently broke its limbs and pulled it out bit by bit, checking nothing had been left behind.

“It sounded absolutely horrific. I tried to tell myself it was too late to back out, but I remember saying to a nurse, as I lay on my hospital bed waiting for the operation: ‘I don’t think I can go through with this.’

[…] “He really is the best thing that ever happened to me, and I still feel guilty that he could have so easily not been here.

[…] “If I hadn’t changed my mind at the last minute, I think I would have been consumed with guilt for the rest of my life.”

Related to a blog entry I made Saturday concerning a National Post article on abortion (read my blog entry here), here are some letters to the editor posted today at the National Post:

In our polite Canadian society, we generally call people what they call themselves. The debate is shaped much more by the bias in the media than any other factor. Persistently calling pro-life people “anti-abortionists” is rude and misleading.

Every physician is pro-life, with one exception. When the life of the pre-born child is considered, far too many physicians who daily fight for the life of their patients, become anti-life for apparently no good reason except they have been persuaded that a woman has the right to decide which of her pre-born children may continue to live and which may not. Since abortion is a medical procedure, performed by medical staff in medical facilities and paid for by medical funding, the debate should be: is abortion good medicine? There is rapidly growing evidence that abortion does considerably more harm than good. Abortion is bad medicine. This is the reason that more women are successfully suing doctors for their abortion related harms. It is the reason that it is increasingly difficult to recruit physicians and nurses to perform abortions.

In Gonzales vs. Carhart (the recent partial birth abortion decision), the U.S. Supreme Court considered the problem in the U.S. which, by comparison with Canada, has raucous debate. The Court concluded that ignorance of what abortion entails is inimical to informed patient consent and rational public policy debate.

Canadian media have shut down news and discussion of abortion because they do not want the public to think about what it entails.

There is a rising movement of women who have had abortions and are beginning to the have the courage to speak up about them.

Most of us were only teenagers when we found out we were pregnant, pressured to have abortions by our boyfriends and parents. We were told it was “just a clump of tissue”—“just a fetus”—so we believed that if doctors, those who cared about us and government thought it was OK, that it must be all right.

As founder and president of Canada Silent No More, I’ve been reaching out to the thousands of women suffering in silence about their abortion pain. Most women live with deep remorse, regret, shame and guilt from the choice to abort their babies. We were not informed about all of the risk factors, or trauma it would cause.

There have been over 100,000 abortions done every year in Canada for decades now. Doctors should be saving lives, not stopping healthy beating hearts.