And here is their desired effect, in real life:  I blogged about a guy and his lawsuit in British Columbia who was quoted in the paper as saying “It’s about keeping corporations honest, that’s really what it’s about.”  His lawsuit was against the B.C. Lottery Corporation.  A crown “corporation”.  In other words, in honest words: THE GOVERNMENT.  Not a real corporation at all.  It had utterly nothing to do with keeping “corporations” honest.

A more recent blog entry highlighted the Vancouver Sun and its “Business” section front page, which featured a story on B.C. Hydro—and therefore nothing whatsoever to do with “business”, but rather with abject “socialism” since BC Hydro is 100% THE GOVERNMENT.

But you know, like, Eureka. Am I right, liberals? 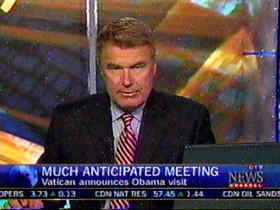 Reporting that the Pope will meet with President Obama in July in an effort to iron out differences between the Vatican and Obama’s yes we can! approach to “stem cell research”, the CTV News Channel once again, purposely, I think, muddies the water on this issue.

I think this must be part of their ongoing effort to paint conservatives and other Christians as “anti-science” boneheads, since lying like that certainly has that effect.  If so, it’s abject bigotry and it’s insulting, to say nothing of being riddled with intellectual dishonesty, and, ironically, it is itself “anti-science” (unless you truly believe “political science” is a science, in which case this is pure “science”).

“… sources say the Pope is interested in meeting the President despite Obama’s support for abortion rights and stem cell research.  The Vatican has been seeking common ground with the President on those issues.”

Anchor Dan Matheson must know that, or else he’s science-stupid —or possibly “anti-science” (—wink!).

Failure to make that science-based distinction when reporting news on pure science issues, is scientifically and journalistically reckless beyond any chance of it being an oversight or an accident, I think;  and I think actually it purposely leaves news consumers to assume that Catholics are (that is, Catholics in this case, but usually it’s presented in such a way as to lump all Christians and all conservatives, especially President Bush) in a sort of dumbo category of “anti-science”, religious mythology believers who are “against stem cell research”, which is of course an outright lie, and worse.

Here’s a clue:  You see exactly this same lie repeated over and over at all the most extreme left-wing blogs, in which they falsely claim or insinuate, using the furthest thing from “science” (as Dan Matheson and CTV also just did in exactly that same way), that president Bush and Catholics and possibly all Christians and conservatives are “anti-science” because they’re “against stem cell research”.  This leads to the kind of pure bunkum statement repeatedly made by President Obama, in which he blithely, and blatantly dishonestly, and yet heroically, promises “to restore science to its rightful place”, now that he’s President.  (And then the clueless all stand and clap wildly like cloned sheep).

Their real agenda is not “to restore science to its rightful place”, but often to restore their pro-abortion agenda to its leftist place, by further reducing the value of human life, which of course the farming or harvesting of human embryos in embryo mills and factories obviously does.  It’s either that agenda at play in the usual stem cell reporting, or it’s pure ignorance or stupidity or a callous disregard for truth and science and journalistic integrity or it’s all of those things in a funky combination.

It’s harvesting of humans and human life simply for embryonic stem cells —that normal people who love science and have a moral and ethical conscience, like me, are against.  Conservatives, George Bush, and even the Pope aren’t against “stem cell research”; and no, nor are they against “science” as a general matter, actually.  No really, it’s true.  I think there are even some doctors and other scientists who are Christians and some vote “conservative”.  No seriously.  Google it.

Aside from the ethical arguments, adult stem cells are the only stem cells that have offered any cures or treatments for diseases.  Embryonic stem cells have not proven effective as cures or treatments for anything.  Embryonic stem cell research has always been “allowed”, despite the lies from the left.  Private funding has always been allowed, it’s just that investors see no value in it, or are ethically against it, and so there’s hardly any of it.  Even federal taxpayer funding has always been “allowed” for it — just limited under President Bush, for the same ethical reasons shared by millions of scientists who won’t get near embryonic stem cells.  And thus the government steps up.  In the name of “science”.  It’s hideous.

I think that covers it, but it’s hard to keep up with the lies of the “science” (and “corporate”)-loving left.

Previous article$400,000 to Toronto Gay Pride a stimulant too far
Next articleThe end of the Ottawa-Quebec ‘Bidding War’