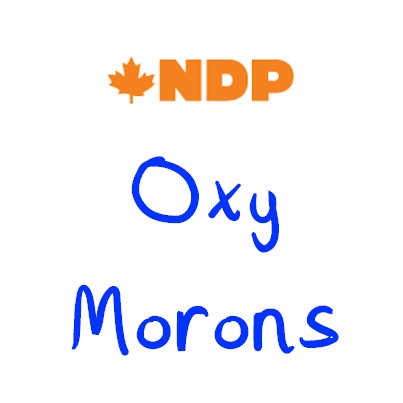 Latest email from the NDP has arrived! Always a good source of bunk, and as always, I’m forced by my own sense of humor to remind you that this example of an NDP oxymoron comes with a heavy emphasis on the moron.

You cannot “build” a “grassroots” “team.” But this is what happens when a tired political PR minion gets so mired in the rhetoric and buzzwords of the day, that they lose all sense of meaning.

Anyway, apparently our state-owned, state-run public school system is failing. So let’s do some learnin’.  A “grassroots” bunch of people are created organically, without a massive political behemoth or big institutional power structures, like the union-owned NDP, manufacturing it with their professional big-union organizers and teachers from the public schools, and the CBC.

Look at the Wikipedia entry.

Take as a good lesson this contradistinction provided by Wikipedia, because it’s what you’re actually doing, NDP:

The tea party movement (go tea party!) is the best political example of a true grassroots movement that I can think of, and seems to be that which the socialist NDP are (perhaps jealously) trying to emulate (only with the absolute opposite of tea party’s goals of small government, lower taxation, and freedom, and adherence to the constitution). They’re failing, as usual. But again, be as “hard at work” as they might, you can’t “organize” that kind of organic outrage and movement for change. It emanates from the grassroots! No, the grassroots are not unionized, so maybe that’s the disconnect.

But another good example is the uprisings in Venezuela, where the people are trying to regain their freedom from the horrible failed socialist dictatorship created by Hugo Chavez (I warned you about that socialist nutbar!), and in Ukraine, where the people are trying to regain power from the socialists there. Yup: in light of those real grassroots struggles against socialism, it’s sort of oxymoronic that the socialist NDP are trying to manufacture outrage here against… our freedom from government, and free markets.

For more information on making sense instead of faking our your base, continue reading my writing at ProudToBeCanadian, BoldColors.net, and JoelJohannesen.com.  Bring a dictionary.

Previous articleCanada’s far-left calls for “A National Day Of Action!” Yeah actually, just a call for your cash.
Next articleUPDATED: CBC admits to bad expense claims by CEO since 2007, under heading “CBC’s continued commitment to transparency.”