Canada’s far-left calls for “A National Day Of Action!” Yeah actually, just a call for your cash. 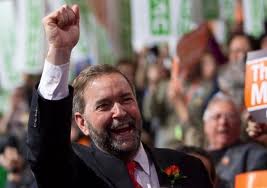 Got my latest breathless NDP quest to gain material wealth in the form of cash with which they feel they can improve their lot and make meaningful advances!

“What are you doing this Saturday?!”  Well I haven’t been asked on a date in ages, so I played along. I certainly couldn’t write them back at that reply-to email address: [email protected], because I figure it may not be very well tended.

And make no mistake: disguised, as it is, as a big event which they want you to participate in, called the “National Day of Action” (what, like “Arab Spring?” or more like “Occupy Canada?”), it’s actually a call for your cash. Watch. I bit the bait.

Thousands of New Democrats out in their communities, talking with neighbours and friends on their doorsteps – and online.

That’s what things will look like this Saturday, on our first ever National Day of Action.

The NDP has a practical plan to make life more affordable for Canadian families, and on February 22nd, we’re taking our campaign nationwide. New Democrats from St. John’s to Victoria will be knocking on doors and sharing content online.

Get involved today. Sign on right now to take part from wherever you are in Canada:

It’s no wonder over 15,000 Canadians have already joined our campaign to make life more affordable. Within days of the launch, my inbox was full of emails from people who wanted to know how they could do even more to help.

This Saturday, they’re joining NDP MPs, organizers and volunteers across the country as part of our National Day of Action.

Sign up right now to take part. You’ll be joining thousands of Canadians taking action across the country.

Since I’m not a total idiot, and as a conservative, I say to myself: I need to know about this “plan” they have, before I agree to join the big protest mob on Saturday.  After all, spending Saturday protesting isn’t all that practical, especially since I have actual, meaningful, positive and really practical stuff to do. They claim to have a “practical” plan! “The NDP has a practical plan”!  See? But when you click on one of several links for info on that plan, you get… no info. All links lead to the same thing. A page where they want you to simply sign up, for, um, something, but we don’t even know what. 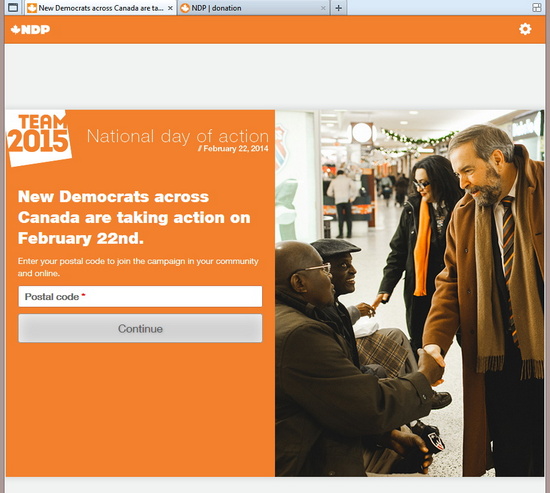 So I did submit my postal code. For the purposes of this blog article, I have to pretend I am as stupid as they obviously think their followers are. Being a progressive is hard.

Once you give them your postal code, you’re still not given any info. Instead, they want more info from you. Your first and last name, phone number, and of course your email address. So I played along. I’m bored now. 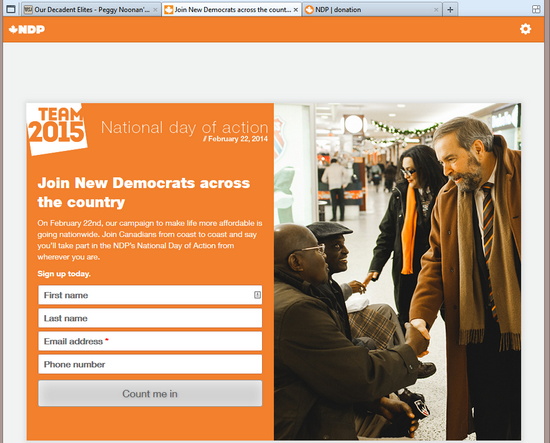 Even after you submit that info, you still get… exactly no information about “the plan.” Instead, you get to… a donation form. 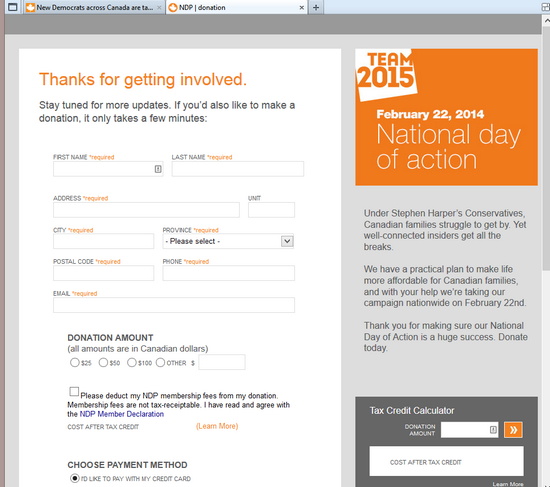 “The NDP has a practical plan” I was promised!  This is decidedly not practical, at all. And you’d think they’d see the importance of learning about their grand “plan” before I would agree to do something so decidedly impractical, like holding up some dopey, angry, left-wing sign, and protesting with a mob right in my own community. And before I hand over my hard-earned, after tax cash to them.

Clearly, I’m not going to donate to the socialist party no matter what.  So while I took the bait (hoping for a date), I did not fall for the switch. Others won’t be so wise.

What if you find out about the plan after the protest, and the plan stinks? Like, say, the plan is for state price controls and more state control over the business of Canadians? A Soviet-style planned economy? You know, an NDP-type plan? Clearly, as a sane, free person, you’d be against that. Will they give you a refund?

I imagine the NDP must be feeling some heat these days. After all, the fact is, the biggest “days of action” taking place in the world today are against the Venezuelan socialist government and against the socialists running Ukraine. Socialists here are seemingly calling for a “Day Of Action” against free markets and freedom seems kind of ass-backward, but it’s all they got.

I guarantee you I will not be at their “National Day of Action.” But I also guarantee the state-owned, left-wing-promoting CBC will be. By way of example, yesterday I wrote that the CBC featured a story on their web site’s front page which was about how socialist Olivia Chow said that the Toronto election is still “pretty far away!”  From now until the next election in Toronto or Canada, all socialists will band together for “action,” even if it is premised on pure bunk.