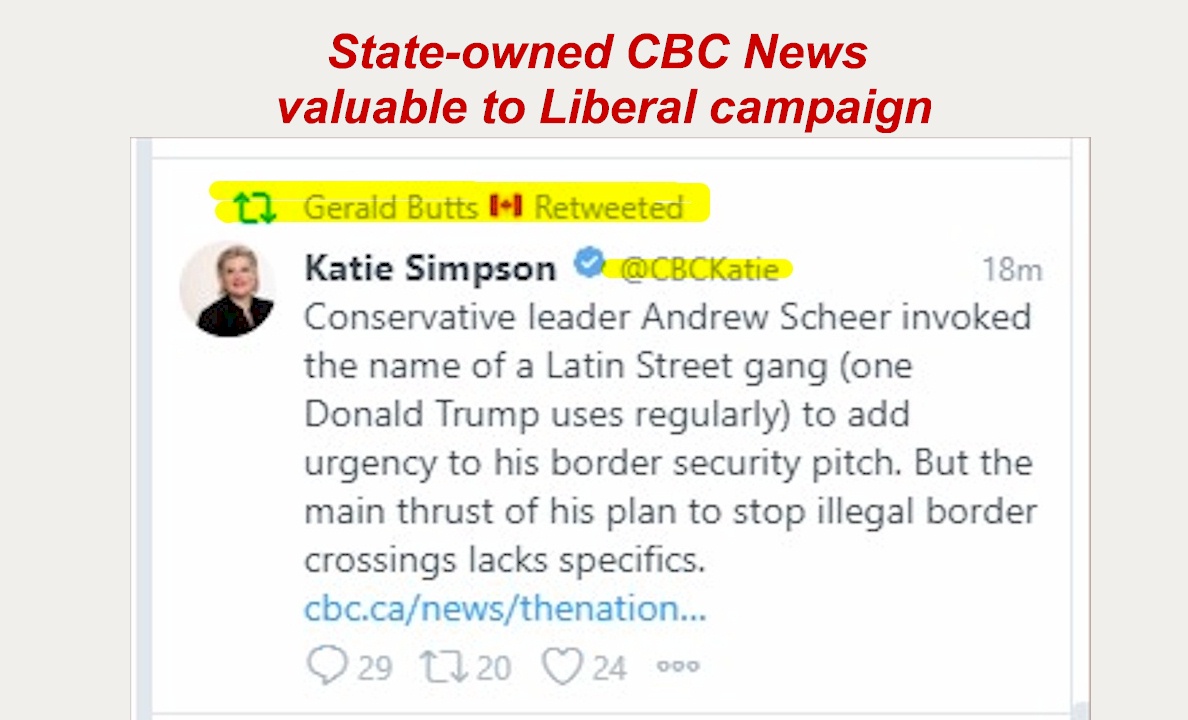 We have a serious problem with our democracy when the state-owned CBC appears to be working (reporting, tweeting…) in a manner so very favorable to the Liberals (how’s that verbiage for moderating my outrage?). We see it over and over. But when the main campaign operative for Trudeau’s Liberals, Gerald Butts, used another one of their reporter’s tweets as a part of their election campaigning on Twitter, I had to read that tweet twice.

It’s a tweet that could have been written by Gerald Butts himself. But no, I checked. Katie Simpson. Reporter. CBC. 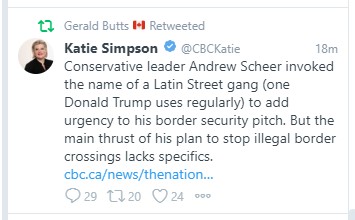 There are several things wrong here aside from the miscapitalization of “Latin Street gang.”

The gang Katie Simpson seems unable to render with her thumbs on her state-owned cell phone, and so avoids naming, choosing instead to invoke the name “Trump” for purely political, anti-Scheer effect, is MS-13. Scheer said “MS-13,” not “one Donald Trump uses regularly.” So this is a direct effort to conflate Scheer with Trump, much as Trudeau does for his own partisan political reasons (as he also does with Ontario Premier Ford, and anybody else he hates and presumes the rest of Canada hates. It’s all about the hate, really). So this isn’t reporting, this is propaganda. It is partisan. That’s why Butts found it so delicious and retweeted immediately.

The problem is compounded by the fact that the employer, the state-owned CBC, which hasn’t deleted it, is a taxpayer-funded, state-owned business (business in quotes) that, in a democracy, must be, and be seen to be, totally and absolutely impartial. If they think this is being seen to be impartial, it would be funny if it wasn’t so dangerous.

Aside from Donald Trump, you know who else invokes the gang MS-13? Justin Trudeau and his government.

Here’s some more information that helps render that tweet as pure garbage (and Katie Simpson and the entire CBC newsroom must know this bit): Trudeau’s government warned of it (Donald Trump’s MS-13 Latin-style gang) in an official government warning issued in May of last year. In her equally extremely biased, partisan, on-air news report, Simpson points only to news articles that Mr. Scheer pointed out to her (as if she didn’t know about all this funky gang stuff), failing to add that the articles contained within them the Trudeau government warnings of MS-13.

Here’s one of those opinion articles from that time, May 2018. (Another pertinent article not mentioned at all is from the National Post, also from last year: “Toronto man’s boast of being in notorious MS-13 gang leads to deportation order“). I’ve added highlighting for the benefit of Katie Simpson and other such truth-seeking reporters:

The [TRUDEAU] federal government has warned Canadian police services “violent” gangs known for cutting off the heads of victims are attempting to sneak across U.S.-Canada border points to avoid President Donald Trump’s changing immigration policy, The Toronto Sun has learned.

The classified “Alert” from Criminal Intelligence Service Canada (CISC) warns “violence linked to the MS-13 is often described as brutal, from senseless beatings to dismemberment.”

Toronto has seen this gang before — even arresting members who threatened a Toronto justice official. MS-13 stands for Mara Salvatrucha which CISC calls a “Latin American street gang known for its violent activities and that exploits migration patterns to set up new cells.”

It calls MS-13 “one of the largest and most violent organized crime groups in the world” with 70,000 members in “half a dozen countries.”

And it’s not just men. The Washington Post did a story this week describing MS-13 female members luring victims to into being slashed to death.

CISC stated in a two-page document obtained by the Toronto Sun that “the Canadian law enforcement community should be aware of the group’s modus operandi” which includes “the use of extreme violence to exert power and ensure cohesion among its members.”

It also suggested “influx of Salvadoran migrants is expected throughout 2018 and 2019 requesting asylum in response to the removal of their Temporary Protected Status (TPS) in the United States.”

It tells cops and border security people “MS-13 members will likely exploit the migration of Salvadorians to Canada to set up new cells, most likely in the Greater Toronto Area, Montreal and Vancouver.”

The memo talks of potential dangers to residents since “MS-13 maintains a propensity for public and indiscriminate acts of violence, suggesting an enhanced public safety threat in the communities it inhabits.”

…The RCMP says it will comment on the situation with MS-13 in the coming days. …

By the way, among the other retweeters: a Globe and Mail reporter, Ian Bailey, who reports from one of the big gang cities, Vancouver.

It sort of seems like they — the left-wing parties and the establishment media — all work for and with each other, right?