The CBC anchors and reporters used to feign coyness and pretend that “the R-word” (“recession”) was to be ever so reluctantly mentioned in its reports, clearly indicating that they did indeed know the power of repeatedly mentioning “the R-word”, while they repeatedly mentioned it, over and over, 86,000 times.  And that was in the socialism-reliant CBC’s oxymoronic (emphasis on “moronic”) “YOUR BUSINESS” segments.

In actual fact as I personally see facts, which is clearly, they promoted the bejeezus out of “the R-word” and freaked people out as best they could, as almost all media did, and their man Barack Obama did, and liberal-leftist politicians all did, all day long, for ages, until “the R-word” finally came to pass.  As I’ve said, they all promoted a coming recession, ensuring its inevitability and increasing its severity.  Particularly, as I see it, the CBC, here in Canada.

Then it was onto invoking their emergency Operation: What We Gotta Do Is Tons Of Government Social Engineering And Social Program Spending and Takeover of Industry ‘n “Stimulus” (And Early Learning—Wink!) plan.  And whadoyaknow, that passed.  And that was of course, partly at least, the point.

But as a result of some positive statements by Fed Chief Ben Bernanke yesterday, they introduced the “YOUR BUSINESS” segment saying that there was once again mention of “the R-word.”  But alas, in this case, “the R-word” was “recovery”.

They had no problem saying “recession”.  The Left really believed “the R-word” was recovery, at least before its proper time. 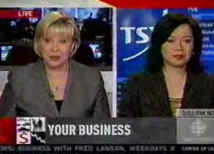 CBC News anchor:  “Well the US president isn’t the only high-ranking official talking-up the US economy, the head of the US central bank went on primetime TV giving a rare interview—he even said ‘the R-word’ — recovery!  Jeannie Lee joins us from Toronto…”

These days, they are regrouping and are demonstrably confused, since President Obama, now that he’s got his peeps sufficiently freaked-out with fear and as a result, his socialism bill (dubbed the “stimulus plan”) was quickly passed by his Congress (totally un-read), and he’s all about the fact that “the fundamentals are sound”… and they always were sound, and I don’t know what are you folks are so worked up about.    Exactly, word-for-word, as Republican candidate John McCain said throughout the campaign, which was at the time met with a solid mocking by Obama, the CBC, and all media and all liberals generally.  The media doesn’t talk about this hideous, overt, glaring Obama/media/liberal-leftist hypocrisy.  Or the magical flip-flop.  They will simply follow suit.  I predicted this months ago.  Test me on this.

Notwithstanding their confusion, many of the leftist media hacks must be relishing all the yummy government take-overs and piled-on government regulations and additional government engineering of society taking place today.  But they won’t admit to that.  Relish is another of those R-words they really don’t like to talk about outside of their cocktail circuit.

The caveat is that after the CBC comes to terms with the layoffs and asset-disposal that they will have to eat, as other media has had to —all a direct result of this recession which they helped propagate, and moreover, a direct result of their terrible product, terrible decisions, and terrible management, they may wish they’d used the recovery R-word more than the recession R-word all this time.