Their new taxpayer-funded marketing slogan is… “Victoria: your search for the perfect orgasm is over.” Seriously. Unfortunately also "over," apparently, is any appeal to class and sophistication and dignity. Your tax dollars at work! 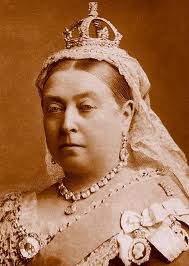 Or I could have called the blog entry “How To Spot A Liberal”.

Victoria is the capital of BC, and in political terms is known to be left-wing — which is to say it’s dominated by liberal-left and far-left-thinking and voting people.  And it’s now known to me to be a place where the inmates have taken over the asylum.

That’s actually true of most big-government-dominated cities, where so many of the people who work and live there are excessively big government bureaucrats and workers—many of them redundant—incestuously appointed and hired and so on down the line, over many years — and who all suck the government teat all day long. (My use of the word “teat” in relation to government is not to be confused with this article’s content about hookers. But it’s fun.)

Throw that concept in bed with the fact that as I always tell you, so much liberal base philosophy and policy revolves around the orgasm, and then you can conceive of Tourism Victoria — a multi-government-sponsored bureaucracy charged with, apparently, boosting what liberals lovingly and respectfully call the “sex trade” in Victoria. Or boosting the crop of embryos to harvest for embryonic stem-cell research. Or boosting abortion. Or wild monkey sex. Or maybe just the population of liberals — I’m not entirely sure — I can only guess. 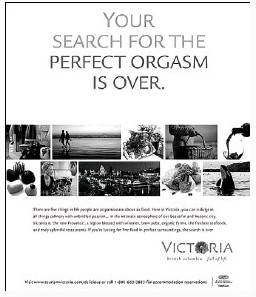 Their new taxpayer-funded marketing slogan is… “Victoria: your search for the perfect orgasm is over.” Seriously.

Unfortunately also “over,” apparently, is any appeal to class and sophistication and dignity. Your tax dollars at work!

Of course I could be wrong. This could all be about building and growing families. It’s a family values slogan! Or not. I note that according to their website, they seemed to have presaged hookers:

Tourism Victoria’s mandate is to increase the economic impact of tourism for Greater Victoria by marketing the destination and servicing visitor needs. 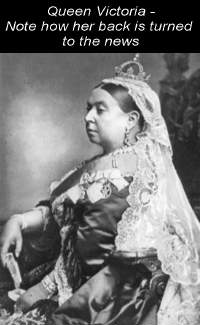 I think those… um, can I call them pimps?… should take the term “servicing” a little less literally and sexually.  Victoria has made its mark by being quaint, classy, traditional, old, prudish, and well, Victorian.  “Servicing” has always meant exquisite afternoon tea and scones and sandwiches with the crusts cut off — not providing orgasms to visitors.

But moderne trendy liberals are none of those classy Victorian things. It’s like a clash-ette of civilizations.

Still stuck on orgasms like sex-addicted freaks, the apparent “sex-trade” tourist promoters also came up with: “Meet Victoria – Beautiful, talented and dead sexy”.  I imagine it’s “sexy” because of all the hookers, since cities aren’t by nature “sexy”—at least not in that “orgasm” kind of way.

I’m sure Queen Victoria would approve — and have multiple orgasms — if only she were as trendy and modern and “with it” and as yummy as today’s über-groovy liberals who know that the only way to Utopia is the orgasmic way.

To verify that and just to help me understand where her namesake’s apparently insane moderne townsfolk could have gotten the idea to kill Victoria—the city—in such a way, I looked up Queen Victoria in Wikipedia, and found this:

During Victoria’s first pregnancy, eighteen-year old Edward Oxford attempted to assassinate the Queen while she was riding in a carriage with Prince Albert in London. Oxford fired twice, but both bullets missed. He was tried for high treason, but was acquitted on the grounds of insanity.