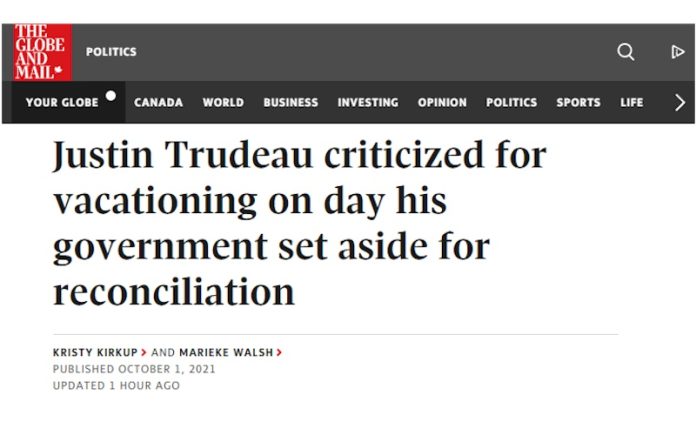 Globe and Mail — I mean… what can I even say at this point? Read this paragraph from the article and tell me. Please! I need your help!:

On Thursday, Mr. Trudeau’s public itinerary said he was in private meetings in Ottawa but his plane was picked up on a flight tracker heading to Tofino. The Prime Minister’s Office then confirmed his actual location.

Quite apart from the blind, and, I mean, really obtuse, and outright crazy decision to head off on a vacay instead of doing what he does best — virtue signal for the state-owned CBC and the other state-sponsored “news” media by acting all somber and sad on his special day — Truth (!) Day — he has now been caught in (yet another) lie. On Truth Day!

Apparently, he was also invited by various indigenous groups to attend any number of special events to mark his big day. But nah. He declined. He had to vacay!

In a brief statement posted to Twitter late on Thursday the Union of British Columbia Indian Chiefs called the Prime Minister’s decision to skip the event an “arrogant dismissal” and “slap in the face” to residential school survivors. “If this event was before the election; Trudeau would be there on both knees,” the post said.

He has, indeed, spent some time on his knees.

Have you thought of what I can say yet? Here’s something: Yesterday, I worked.

Previous articleI’m working today as usual
Next article“Canada” sends $800 MILLION to Jordan; King quietly spends hundreds of millions on self