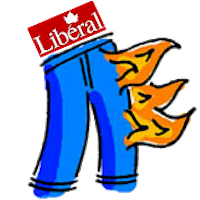 Calling it a “Cheap Lie” is a bit of a misnomer since this is all costing all of us tons of taxpayer cash. But anyway. The Libs seem to be taking their cues from CNN now.

Even the Liberals’ minister of finance, who can’t balance a budget, could count better than Justin Trudeau’s allegedly lying press secretary. You only have to look at the photo they attached (all of this at taxpayer expense).

1000+ came out to ask their PM a question in #Kingston today. #CdnPoli #polcan pic.twitter.com/eNTKYSEdDa

And yet they’re stickin’ with what appears, from their own photo and Akin’s reporting, to be a lie. I anticipate no “fact-check” from the Libs’ CBC division (number one, because he’s a lib and they luv their boy). But on the plus side, CBC ignoring this alleged lie means fewer tax dollars will be blown reporting on it than what already has been blown on this BS boondoggle. Wait. Is not reporting on it actually a good thing? OK nevermind. You can’t really make sense of a thing when there’s so much left-wing perfidy involved.

I normally dub them as “liberalvision” because they are, but CTV had me chuckling a little this morning when they tweeted about it as a “taxpayer-funded” “outreach tour.”

I call it a taxpayer-funded Liberal Party PR and support-building charade, disguised as an altruistic outreach tour in order to con Canadians whom they apparently think are complete idiots, but at least they said “taxpayer-funded.”

"Taxpayer funded" — I like that. The state-owned CBC should put that at the beginning of every Tweet and article and before their newscasts https://t.co/jNrWqCAPrl