election campaign, which is going very badly for the BC Liberals and its leader, Christy Clark (ie., it’s failing).  This according to reports from Sun News.

From my own recorded clip from Sun News, here’s what he said (the written report at Sun News online cleaned-up his “uh”s):

“I will not be lending my support to any party we have an awful lot of work uh here, and I trust uh that the people of B.C., uh, to make, uh, make uh, their decision.”

Uh, yeeeeah. Too busy for that big endorsement, the rejection of which, uh, took longer than a five-second, uh, endorsement and “bonne chance!” would have, indicating, uh, Trudeau’s innate, uh, inherent, grip, uh, on the most important uh liberal skill, which is to, uh, BS the people because actually liberals don’t trust, uh the people, and liberals think the people are actually uh, too stupid, uh stupid to make “their decision” on, uh, any, thing.  Um, Duh.

Let me explain to the state-owned CBC, Global, or CTV news-watching Canadian: Liberals manifestly don’t trust the people of anywhere to make any of their own decisions on anything, including even how to spend their own money, tend to their own healthcare needs, or even raise their own children *cough* beer and popcorn *cough*. Governments must do things  —  including spending their money  —  for them. That’s a large and most fundamental part of what makes them the big-government, nanny-staters and progressives that they are.

Also, Justin Trudeau not supporting you is actually a big

plus. So it’s a bit of a two-fer from young Justin.

For her part, Joyce Murray said this:

“No I will not be involved in that, no I’m a uh, federal Liberal and uh so I have support on both sides of the uh, of the uh, divide in British Columbia.”

This is also a bit of a two-fer. It seems to be about her personally, as she indicates that she can’t support Clark because notwithstanding her very tight party affiliation, which extends so deep it’s the party which she wanted to lead, SHE (Murray) has support on “both sides.” But there’s also this “I have supporters on both sides of the divide” line. For those of you outside of BC, the “divide” is not really a “divide” at all  —  it’s more of a progressive morass, (with an emphasis on the more and ass). She means the socialist BC NDP on one side, and the not-quite-as-socialist BC Liberals on the other. That line says nearly all we need to know about Liberals federally, and their hidden agenda (well not so much “hidden” in Murray’s case, inasmuch as she tacitly embraced the idea) of eventually coalescing with their brethren in the federal socialist party and other progressives against the Conservatives.

(In case you’re wondering, as British Columbians and outsiders alike may be: the BC Conservatives are, even after all these years, out in the political wilderness, apparently incapable of launching a productive election campaign or becoming a relevant player in this election, despite this rare opportunity wherein BC voters lament both of the progressive choices of the left.)

This lack of federal Liberal embrace is not as shocking as you might think. As most right-thinking conservatives in BC know, Clark is a social and economic liberal, barely able to truthfully lay claim to the “free enterprise” bone fides which she nonetheless claims anyway.

And Clark is well-known to be a federal Liberal as well. So this lack of support from fellow progressives in Ottawa has to be at least a little embarrassing for her. But (air quotes) You know what? (air quotes off) She isn’t embarrassed.

“You know what I haven’t asked anyone… You know what I generally I think it’s important in British Columbia to make our own decisions aboat [yessir, she said ‘aboat’] this.”

“You know what” Christy Clark? You don’t know “aboat” that at all. The very next thing out of your word-hole was to boast “aboat” two other federal pols who did endorse you. So.

As I said, Clark fancifully paints herself as a coalition leader of free-enterprisers, confusing some low-information voters  —  like Justin Trudeau  —  into believing she really is about free enterprise, thus, apparently, disqualifying her from the loving embrace of the swells in his federal progressive smart-set.

In my quest for further amusement, I would also like to add to the confusion and note the slightly inappropriate backdrop to Clark’s big stump speech, in which she dismisses the need for hugs from her federal leaders on the left. It’s as if the NDP planted several fellas dressed in their famous NDP “orange wave” or “orange crush” (or whatever it was the news media advocated on their behalf) uniforms right there, just to show their love, and confuse the people in their decision-making even more. 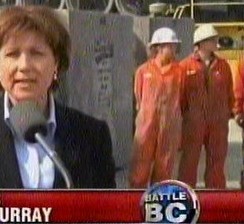 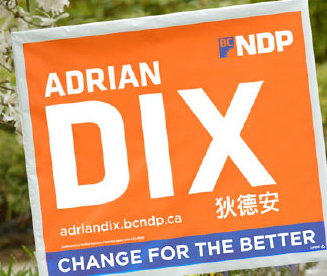 Previous articleJustin Trudeau is so groovy. It’s a newsy fact.
Next articleYour tax dollars at work: “picking nose and eating boogers may be good for you.”