The liberals’ newspapers across the country are replete with results proving that their years-long family destruction plans are making yummy “progressive” de-construction “progress”.  In my city’s case, the paper’s stories are not presented as a cautionary tale of a future fraught with potential problems pursuant to the further erosion of family values, and the not so rosy picture which

may evolve from that—but rather as a celebration of “change”.  The story spans the front page plus four other full or nearly full pages of the paper, with one page of course devoted to the gay “marriage” even though it represents less than one percent of the situation.

The front page headline is “…A Portrait of Change”; and then playing on the cliché used when your cause is so paltry that you have to add ”…it’s for the kids!”, the gay “marriage” page headline is “SAME-SEX MARRIAGE OFTEN FOR THE KIDS”.  Once again, that’s “for the kids”.  Gay marriage happens BECAUSE of—and for—the kids, not the gay “parents”. Got it? 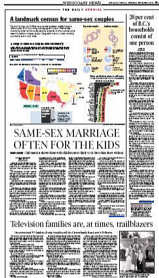 Yes, families are falling apart, as if by the divine intervention of their church of liberalism clerics like failed Liberal Prime Minister Paul Martin who deployed all of the nations’ resources and attention in a rush to change the definition of family and marriage and invoke emergency gay “marriage” legislation (while our troops were fighting overseas in a time of war); the effete gay socialist jewel thief Svend Robinson who practically lived to advance gay “marriage” and special rights for gays; former Liberal minister of gay “marriage” Erwin Cotler who has the awesome magical (sacred?) ability to read things into Constitutions just like the liberals’ Supreme Court division; liberal hockey “player” Belinda Stronach and her family values role-modelling for the young folks; Ontario Liberal premier Dalton McGuinty, who presided over the likes of the changing of the word “mom” to “parental unit”; and too many more liberals to mention but I will anyway because it’s too fun not to: like the ones who advanced divorce laws to the level of the progressive “Canadian values” of single “parental units with fatherless children” we embrace today; and a special place is reserved for those pro-abortion feminists and other such advocates.

Special mention to President Bill Clinton who informed the young ‘uns that if as a married U.S. President you can entice a barely legal female underling to address your sexual instruments of power orally in the White House, and then totally lie about it and get impeached, then surely everyone should do it.  Actually Dalton McGuinty gets a special mention as well, for having the sheer audacity—the insolent effrontery—to suggest that if only they vote for him, he’ll pay Ontario voters off with a “Family Day”, after his having joined and helped lead in its very destruction.  And super special mention to the likes of lesbian socialist Libby Davies, who spends an inordinate amount of time advancing the notion of that family-building “Canadian value” of legalizing prostitution.

Meanwhile, when liberals see these census results confronting them and the reality sets in a little (like when they see or hear any truth—the Petraeus Report, for example), liberals answer poll questions like this… :

… and then proceed to vote LIBERAL in the next possible election.