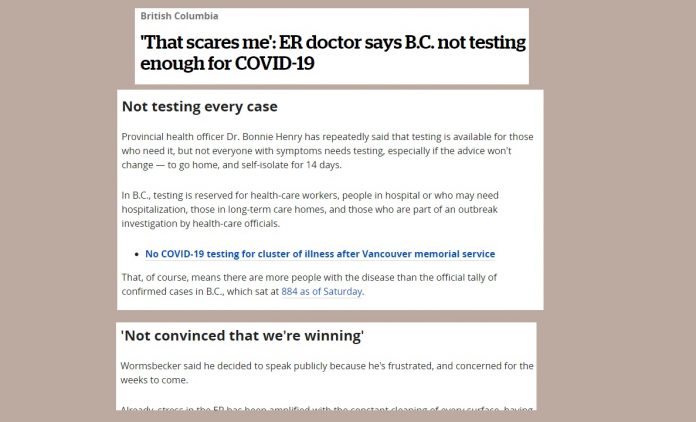 They count the cases that they’ve tested as positive. Well great, but they hardly test anybody. They don’t even test the cases they know to be positive. So how meaningful are the so-called counts? They’re utterly meaningless. [Narrator: That’s not very meaningful!]

“Every shift, he says he sends three or four likely COVID-19 cases home, telling them to self-quarantine for 14 days, without testing — as he’s been told to do,” according to a CBC report. That’s a doctor in British Columbia, where the media is lauding the government’s efforts for some reason (at least they’re better than the Trudeau government’s response, but that’s a very low bar).

Not testing every case

…Provincial health officer Dr. Bonnie Henry has repeatedly said that testing is available for those who need it, but not everyone with symptoms needs testing, especially if the advice won’t change — to go home, and self-isolate for 14 days.

In B.C., testing is reserved for health-care workers, people in hospital or who may need hospitalization, those in long-term care homes, and those who are part of an outbreak investigation by health-care officials.

That, of course, means there are more people with the disease than the official tally of confirmed cases in B.C., which sat at 884 as of Saturday. …

In other words, BC hasn’t got the foggiest clue how many cases they have. They report 884 but they’ve tested hardly anybody, including even those they think have it.

And by extension, nobody in any province, state, or country knows the real count. Most jurisdictions in the West have the same problem gathering enough testing to provide a useable data set. But that doesn’t stop them and the media from reporting these stats as if they’re gold. Then the media get to report things like “U.S. now has the most cases…” etc.

That’s a particularly stupid stat at best, not least because I sense it’s reported for politically motivated reasons (Orange Man Bad, etc), and as I always say, you can’t trust a media with an agenda. For example, the hitherto borderless European Union has more cases, but suddenly the European Union is divided up into individual countries now, whereas when talking about Brexit, it was all one big beautifully borderless country and this One United European Block was The Most Important Thing.

And when the U.S. President touts the fact that the U.S. has tested more than other countries, (which is the Actual Most Important Thing], the media is quick to condemn his “lie” because it isn’t based on a per capita number, which is suddenly vitally important to them. “Per capita, the South Koreans tested far more! Trump is a liar!,” they tendentiously report. Granted, it is a good parameter to use, this per capita concept, and to report based on a per capita as well as a total number. But the rules of fairness and competence and usefulness dictate that you have to be consistent in your reporting. They’re not. On purpose.

They totally ignore the per capita number of cases. Per capita, the U.S. would place something like 30th (per https://www.worldometers.info/coronavirus/ on March 30, 2020). Not number one. And on that metric, France, Germany, Ireland, Italy, Portugal, Norway, Belgium, Switzerland, Austria, Spain — virtually every European Union country — are worse per capita, than the U.S.  But the media don’t use per capita in this instance. They aren’t relying on science, for this one stat.

And besides, I go back to testing, which is circumspect and inadequate to the enth degree, as we’ve see in the case of BC’s numbers. So who’s lying? The media is not being honest, because while President Trump never stated any per capita numbers, the media decided to for just one stat. [Narrator: shock!] Consistency in reporting data is a scientific necessity, as those who claim to own science should know very well (they don’t very well at all). And lying about this sort of stuff and being inconsistent for partisan political reasons, which is what this is about, is deadly dangerous.

But back to the number of cases. Insofar as comparing them and using them as a scientific guide, the numbers are particularly untrue if you give your head a shake and clue-in with regard to the Chinese Communist Party, and realize that you can’t possibly believe them if you’re a serious person. They demonstrably, historically, reliably lie at every turn. They are what I’m sure Ronald Reagan would call the new “Evil Empire” if he were still alive today. And not just because of their lies.

No serious, intelligent, reasonable person — and certainly no journalist, who is literally charged with the responsibility of trusting nobody’s word — can legitimately believe them. They — the CCP — will face the wrath of the entire globe after this is done, or at least they should, because of their lies, their mendacious cover-ups of this virus, and their deceptive “blame America” propaganda among other things, which has ended people’s lives, harmed countless millions of lives, wrecked millions of businesses, more millions of jobs, millions of people’s retirements, and whole national economies. But the Globe and Mail trusts them totally, which makes them — the Globe and Mail — ridiculous and, frankly, maybe even dangerous, because as I said, bad reporting like this actual example from today, in the midst of a pandemic, is utterly stupid and literally deadly: 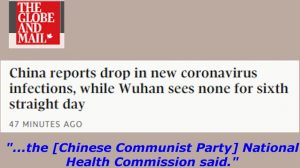