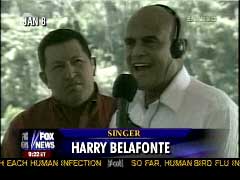 Harry Belafonte called President Bush “the greatest tyrant [and] terrorist in the world” last year, and said to anyone who would listen that “millions of Americans support the socialist revolution” of communist Venezuelan president Hugo Chavez.  He said this while visiting with the rabid, militant, communist dictator and anti-American Chavez (who since then has only increased his socialist, dictatorial grip on Venezuela, taking state control of television stations and radio stations and other previously private businesses).

Therefore Canada’s state-owned, state-run CBC just got through having a long, stroking, love-in interview with Harry Belafonte on their “Newsworld” channel, without asking about any of that even once —in fact I think the CBC actually agrees with him wholeheartedly.  By way of proof, when he egregiously slanders the American President in the hard-hitting interview and is allowed to call the President of the United States a “liar”, a “cheater”, and a “crucifier”, and just for good measure: “unpatriotic”, the dumb, appeasing, approving “anchor”, CBC’s Andrew Nichols, doesn’t call him on it.  In fact he encourages him further.

This, on Canada’s taxpayer-funded state-owned, state-run Newsworld channel this morning.

Here’s a screen-capture of the interview with the communist Belafonte. He was “honored” twice: Once by some left-wing Canadian group; and again by Canada’s far-left state-owned, state-run media today: 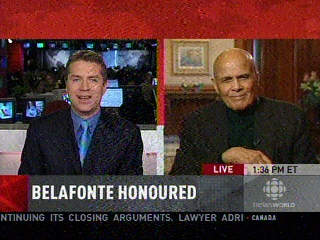 The state-employed enabler Nichols simply smiled (quite literally) and went on with his next leading fluffy softball question —a question clearly designed and framed to provide a platform for the communist to advance his communist cause and to validate him further for the benefit of the CBC’s viewers.

Here’s just part of today’s interview:  just one of the kind of interviews that the state-run CBC typically conducts, the purpose of which I think is to validate far-left nutbars like Belafonte and the things they say and do.  Of course the upside of this is that it validates everything I always say about that horrible center of liberal-leftist agitprop and propaganda, the CBC; and those of us in the sensible set are given further proof and ammunition in our argument that state-owned, and state-run media should be banned in this country.

(Note how the CBC’s fanciful history re-writer Andrew Nichols re-writes why Belafonte is called “Un-American” —it’s not because he supports Chavez who hates America—it’s because he criticizes George Bush, you see.)

Andrew Nichols, CBC: On the flipside, you’ve been labeled “un-American” for being critical of the war in Iraq and the Bush administration.  How difficult do you find it for your voice to be heard for you opinion to be heard and to still be considered a proud American?”

Belafonte:  Uh, it’s not difficult for my voice to be heard at all.  As a matter of fact, just sitting here talking to you, my voice is being heard.  Your need to interview me is a part of the validation of what I mean to the world at large in terms of my opinion.  And I use that opinion when I see those who are TRULY unpatriotic —those who have used their power to lie, to cheat, to crucify, as does George W. Bush, and almost everyone in his administration.  I ask the world to make its decision as to who here is the patriot.

That hate-filled response to the fluffy softball leading question literally brought nothing but a smile to the CBC “news” anchor’s face.  Literally.  A smile.  He then went on without asking Belafonte to explain that rabidly anti-American and disgraceful remark, but rather lofted forth another hilariously fluffy softball question designed to draw him into articulating his far-left position on “human rights”—his dalliance with Chavez notwithstanding.

Then they interviewed PTBC columnist Ann Coulter.  No of course I’m just kidding.  They don’t interview 6-time New York Times bestsellers who are among the most successful non-fiction political authors of our time, if they are conservative and actually say sensible things, particularly against liberals like them.  Communists who hate President George Bush and say so are A-OK though.

Let me restate the obvious:  (a) you actually get dumber with every second that you watch the CBC (I’m inoculated because I subscribe to Fox News Channel and I have a brain); and (b) state-run and state-owned media should be banned in this country (and in Venezuela), and that notion enshrined in our constitution.

Here’s another blog entry based on the idiotarian anchorage of Andrew Nichols.