The folks who bring you the American game shows “Jeopardy” and “Guess That Word”, or whatever it’s called, will be bringing you “This American Life,” the U.S. public radio show I’ve never heard of hosted by an American I’ve never heard of named Ira Glass.  It will apparently be featured on the Canadian- 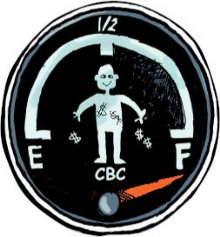 taxpayer-funded state-owned CBC’s radio division (they have lots of stations on AM, FM, and they own nearly half of Sirius Satellite of Canada too — so I’m not sure which one it will be on) starting this year.  Naturally, it’s being reported on the state-owned CBC News division today.

Which makes us scratch our heads yet again and yet again ask why (along with the usual “WTF”, and “who the hell’s in charge here,” and “are we living in insane-land?”… etc).

Because it’s so Canadian.  Well OK no it’s not that, given the nuanced clues provided by the name and every single other detail of the show.  So it’s obviously because it’s a core function of government to present radio show “entertainment” for Canadians.  OK it’s clearly not that either, even if progressives all think that it is so.  Maybe it’s to address our current economic situation in which we have way too much money, and we have no Canadian things to blow it on, and China already has scads of our cash, and so, this.  No.  OK maybe it’s just because the government and its CBC division have utterly no idea what the hell they’re doing and have a massive wad of taxpayer cash to blow on complete crap for absolutely no reason.

Or maybe they’re actually simply just trying to piss us all off.

And this is with “Conservatives” in power.  Imagine the possibilities.

Previous article
Does Fort Worth Ever Cross Your Mind?
Next article
Targeted shooting despite liberals’ gun registry being checked 18,984 times per day? IMPOSSIBLE!