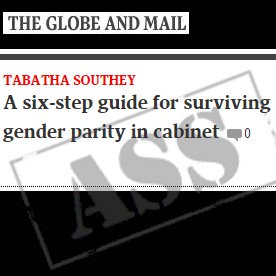 POSSIBLY THE DUMBEST COLUMN OF THE YEAR
[dropcap]T[/dropcap]he sneering commentary today by the liberals’ Globe and Mail division via their ever-so modern Tabatha Southey is so condescending to conservatives; so full of cheap shots and banality that I thought I must be reading the state-owned CBC’s new state-run national newspaper (coming soon!).

According to Tabatha Southey if you don’t agree that a cabinet should be made up of equal number of women and men, you need a six-step program like an alcoholic, and lesson one is that you’re “psychologically stuck in the 1950s.”  Not merely “stuck,” mind you, but “psychologically stuck.”  The liberals’ purported love of science has jumped the shark again (liberals – sharks can’t actually “jump,” it’s an expression!). Now they just stick science-y words onto things to demonize Canadians they don’t like. “Deniers” and “Nazi” were just teasers.

All on its own, that “stuck in the 1950s” trope is an old, rather insulting and hackneyed phrase that the left (particularly the more vapid among them) have used only in the most derogatory way, as part of their arsenal to insult conservatives. But Southey adds “psychologically” to “stuck in the 1950s,” which ups the ante quite a bit. So why try to redefine the term into a new official mental malady? Because of the way that the term “psychologically stuck” might be perceived as “mentally retarded,” inasmuch as that’s exactly what it does mean. So what do you know, I’m not totally stupid. Conservatives are sick. Mentally ill. Nicely done. Psychologically nicely done.

Then Southey goes from the ridiculous to the utterly jejune in another one of her six steps: “Be prepared to stave off the impending communist revolution, which the threat of 15 or so women cabinet ministers can cause.” I don’t really know how that helps us get over the supposedly horrible prospect of three more women in cabinet than Stephen Harper had, but of course Southey writes this solely to mock conservatives, reality be damned. Forget the original project! Let’s just get on with insulting conservatives, which was our original point!

I imagine it’s supposed to be “funny.” But she doesn’t even do it right. Not even a CBC viewer thinks that conservatives link, in any way, shape, or form, women to communism. Ever. Anywhere. At all. (We do link the CBC to communism, sure, but that’s based on scientific and economic reality!)

Her spiteful little anti-conservative missive takes several more cheap shots but Southey just succeeds in increasingly revealing herself as a boor, and moreover as someone who monumentally lacks even a modicum of understanding of conservatives or their principles. Women = communism? Come on. Libby Davies aside, I mean.

Write a funny article, sure, but to be effective and maybe even make me laugh, you ought to display a pretty thorough understanding of your subject first. She obviously doesn’t. Quite the opposite. (Or she’s merely a hack.) But I don’t blame her. I blame the news media who ensure this lack of any honest understanding of conservatives. The fact that Southey writes for one of the biggest in Canada’s news media is a mere coinkidink.  Oh hang on.

The Globe and Mail – ostensibly a mainstream national newspaper, holds itself out to be fair and balanced, and reminds me over, and over, and over again that it is worth $10 per month simply to read their articles online. I must have my head “psychologically stuck in the 1950s,” when most newspapers were a source of some truth, some facts, some balance, some fairness, and some good columns. But at least I don’t have my head up my assumptions.