As if it wasn’t already enough of a blow to find out that they’re totally out of line with the Afghan population on the question of the military mission in Afghanistan, which must be very maddening and somewhat embarrassing for them [re their sponsorship in the Afghanistan poll—which went our way].  Today, their online poll of their liberal readers adds still more ammunition (pebbles, but I’ll take ‘em) to my already bountiful pile of ammo.

Me and conservatives—and the Globe & Mail’s poll respondents—are right on this issue too.  This time it’s on the liberals’ failed social engineering and re-alignment of Canada into an unidentified God-knows-what multi-cult project.

Canadians just aren’t lining up with what the liberals and their media have staked so much capital on, over so long a period of time—that thing which they have tried so hard to define as this “multicultural mosaic” and which they have presumed to define as yet another “Canadian value” (somewhat ironically—since one of the results of this idiotic idea is that nobody knows what in tarnation “Canada” is now, nor how to describe a “Canadian” anymore). 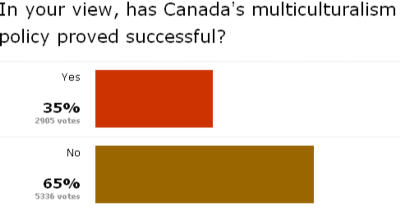 Among the many things liberals don’t understand about Canada—or at least about the Canada’s sensible set, the conservatives—is that we embrace all cultures, but we expect that if those cultures move to our country, they should largely assimilate into Canada as it was founded and as we built it; to live and do things our way as a general matter.  They should speak our language, live by our laws, respect our culture and traditions and our foundational roots, and so on.

Conservatives, at least, don’t think there’s much wrong with our way.  We believe in our Canadian way.  We love Canada. As we know, liberals have a real problem with that.  They constantly question our way.  They constantly seek to change our way.  Relativists, they presume other ways are just as good as our way, which they’re not. Even most of the people who flee their countries and come here agree with that.

We believe in the foundational roots of our country: the Judeo-Christian, pioneering, entrepreneurial, freedom-loving, personal responsibility-taking, free enterprise, culture of life, democratic model upon which Canada was founded and built. The foundational ideals of Canada aren’t flawed. Liberals clearly think they are and constantly seek to change Canada to suit their always changing, baseless view of life.  That’s why liberals are so happy to risk any notion of a Canadian identity.  They don’t have a clue what that is, or to the extent they do, they don’t like it.

We believe that people should come here at our discretion, as a privilege, and then help us build things our way—not to change things to their way—the way of the country they fled.

I think the only cultures conservatives and some other Canadians are against is the liberals’ secular-progressive culture of death, the Islamofascist terrorist culture, communism, lawlessness, tyranny, evil, abject stupidity, the CBC, and such.

This is another reason why we should never, ever let liberals define what “Canadian values” are.  They usually have utterly no intention of building anything like Canadian values—in fact they seek to define them and redefine them for us.  And they just aren’t what we are actually about.